Jorge Cervantes says that cannabis cuttings are so easy to root, they have been known to root in water alone.

Well I had to trim back a leggy plant that was getting out of control and crowding out others. I had a cutting from a lower branch that I didn't really care about one way or the other so I figured I'd stick it in some water and see what happens.

The strain is High Plains. It doesn't root as easily as NYCD, in my exerience. I have not deprived the mothers of Nitrogen at all, so the cutting is at a further disadvantage because of that. All I did was cut a notch out of the cap of a milk jug, insert the trimmed cutting into the notch, and put the whole thing in a cup of reverse osmosis-filtered water. The stem was cut at a 45 degree angle. There are two cut leaf bracts below the water line. I put a plastic bag over the cup to form a humidity tent. I stuck the thing in a south-facing window under the shade of another plant.

I predict that it will root, but slower than if I were using rooting hormone and heating the root area; Let's say 3-4 weeks. 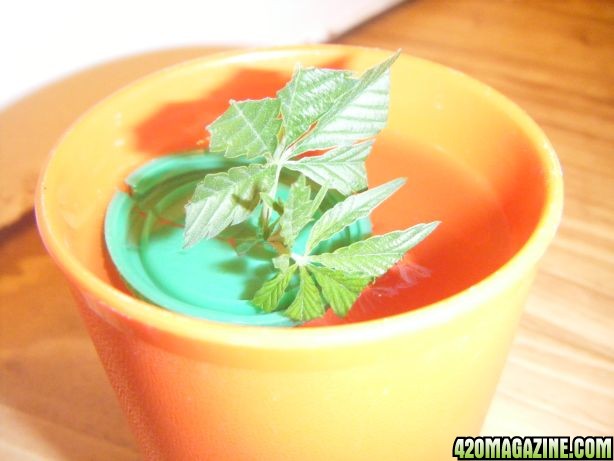 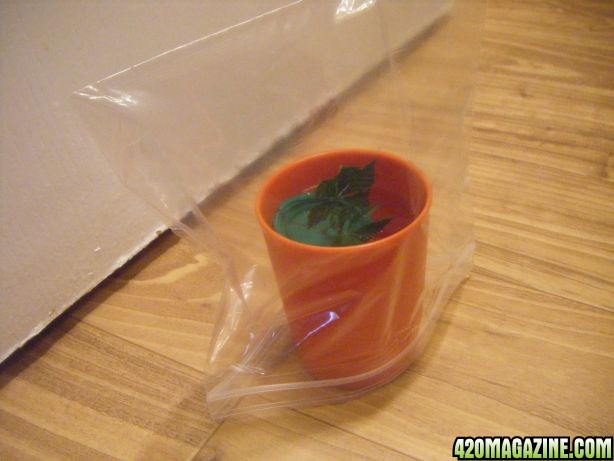 i had a cutting root in the aero cloner in 5 days with just plain water, bit different from being fully submersed, but shows that only water and air are needed to form roots.

yeah i've seen clones root just being held in water. I think the lack of o2 though is possibly a problem with them always submersed which could explain why she didn't pull through

I do this all the time in my aquarium... Just put a large cutting in there near the bubbled, 1/4 dies the other three time they root.
:smokin: CA Prop 215 Qualified Patient

should have added a drop of SuperThrive... look it up! air or not... it is important not to get a 'bubble' in the vascular intake when cloning best would be to cut it IN H20... serious!
M

I use this method with a decent success rate, In fact I just started another experiment. In fact I should document it.
M

Just did another basic experiment, 2 drops superthrive 1 gal h20. Adventitious Rootcaps shown after 6 days. It's day 9 and there's clusters of rootcaps emerging, should be ready to plant in 1 week. Key is changing the water regularly. Superthrive isn't needed, just increases success/root mass. I'm going to try some willow or kelp next for organic cloning/rooting.

How do I clone plants? Simple Water-Cloning Method