It's been two years but the city is once again moving ahead on medical marijuana.

By a vote of 6-2, the City Council supported Mayor James Fiorentini in signing a letter of nonopposition to allow Alternative Therapies Group to set up a medical marijuana dispensary in a business park near Route 97 and Interstate 495.

With the council voting in favor of the dispensary Tuesday night, Fiorentini can now get to work negotiating a host community agreement with Alternative Therapies, which opened the state's first medical marijuana dispensary in Salem in 2015.

The city's previous foray into medical marijuana involved the company Healthy Pharms, whose stormy negotiations with the city ended in 2015 when it opted to open a facility in nearby Georgetown.

Alternative Therapies CEO Chris Edwards informed the council Tuesday night that due to changes in the state's medical marijuana statute, there would be slight changes to the Newburyport-based company's proposed host community agreement.

"We are prepared to give the city three percent of our total revenue for the first five years we're open," Edwards said, adding that the company will be giving preference to Haverhill vendors to construct the dispensary and would provide city residents with 15 to 20 jobs.

"We really think this is an underserved part of Essex County," he said.

The company will only be required to provide the city with revenue for its first five years of business, with 3 percent of revenue being the maximum allowed by law. Edwards said Alternative Therapies is still willing to donate $25,000 annually to a charity of the city's choice as proposed when making its pitch to the council in September.

Alternative Therapies officials said a portion of that revenue would go toward police and opioid prevention efforts.

Edwards told the council his company would spend $2.5 million to $3 million to bring the dispensary to a 6,000-square-foot site in a business park on Computer Drive.

The marijuana sold at the Haverhill dispensary would be grown at the company's cultivation site in Amesbury. In addition, Edwards said Alternative Therapies would not be setting up a facility at the dispensary where customers could ingest marijuana.

When asked by LePage if Alternative Therapies would look to sell recreational marijuana when the state approves its sale as expected next year, Edwards said he wouldn't rule it out but that the company would abide by any regulations imposed by the city on recreational pot.

While some councilors voiced support for the dispensary early in the night, Bevilacqua urged caution at allowing a medical dispensary to come to the city without pushing for further restrictions on recreational marijuana, which Massachusetts voted to legalize last fall.

The council ultimately voted against Bevilacqua's proposal to add language in the letter of nonopposition pertaining to recreational marijuana, with several councilors looking to wait until the state implements more definitive regulations of its own.

"We've done our vetting and we have the most experienced company in the state, not some upstart," said Councilor William Macek, a member of Fiorentini's marijuana policy committee who helped draw the city's medical marijuana overlay district in 2014 as a member of the council's Administration and Finance Committee.

At the start of the meeting, Fiorentini told councilors that bringing a medical marijuana dispensary to the city would be a multistep process, one he has long supported.

The mayor said the next step would be to sign a host community agreement and then bring the project before the council for a special permit hearing. The council would have to muster at least six votes for a special permit to be granted, according to Fiorentini, who said he isn't opposed to multiple dispensaries in the city.

"There's not just one CVS or Walgreens," he said. "The driving force is that people who are prescribed medical marijuana have to drive elsewhere to get it."

Dr. John Maddox, district physician for Haverhill public schools, has long opposed opening a medical marijuana dispensary in the city, and raised several concerns about the dispensary Tuesday night. He questioned how much money Salem has received through its host community agreement with Alternative Therapies.

Maddox told the council that a petition opposing a dispensary in the city received more than 500 signatures from city residents. He listed concerns over loose regulations related to edible marijuana products and marketing on billboards in the city by the website Weedmaps, which is unaffiliated with Alternative Therapies.

"I think we need to consider the context in which we've made this decision," Maddox said. The proposed dispensary location would be a mile from Haverhill High School, which he said already has a higher-than-average rate of marijuana usage.

"Lawrence and Methuen have enacted moratoriums on marijuana, which further concentrates the possibility that Haverhill will become the mecca for marijuana in the Merrimack Valley," he said.

Macek proposed that Maddox's concerns be sent to a committee for evaluation, presumably the Administration and Finance Committee.

Following the council's vote, Maddox met in the hallway outside council chambers with Edwards and Alternative Therapies CFO Julio Fuentes. Edwards said the company would be happy to meet with Maddox to address his concerns.

Regarding claims made by Maddox about marijuana being a gateway drug that would lead to harder drug use and that other communities are spending $2 on law enforcement for every $1 their dispensary has brought in, Edwards said their experience in Salem couldn't be further from the truth.

"We haven't had any negative experiences there," Edwards said of the Salem location.

Regarding the packaging of edible marijuana products, Edwards said state laws prevent companies from putting cartoon characters or using bright colors, which can appeal to minors.

"Every week in Salem, we have opiate addicts coming in saying they're using (marijuana) to wean off opiates," Edwards added. "Cannabis is part of the opiate solution. It's an exit drug from opiates." 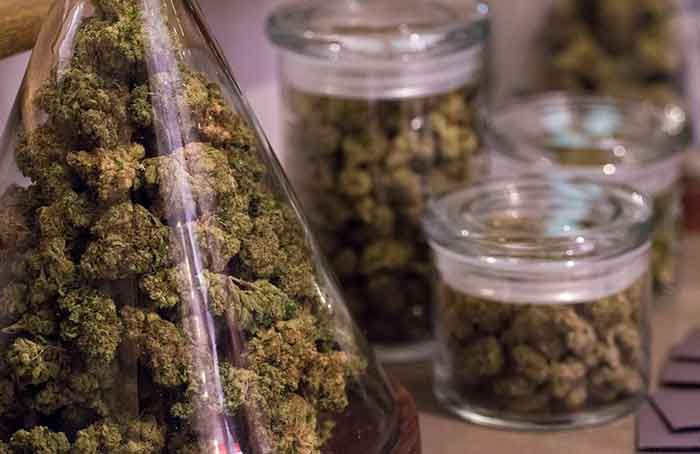