Four Cranberry Highway shops that the Board of Health ordered to a public hearing after inspectors found hemp products in their stores in mid-October were asked to sell no more of the products until the Health Department gets results back from a laboratory which is testing to see if they fall under the town’s synthetic drugs bylaw.

The businesses, two gas stations and two smoke shops, all agreed to keep the items, often referred to as CBD products, off their shelves until the Board of Health determines if they are legal in Wareham.

Five Star Gateway Gas, Speedy Mart, Phat Daddy’s Smoke Shop and New England Smoke Shop – each located on Cranberry Highway – were visited in mid-October by Health Inspector Patrick MacDonald for compliance with nicotine laws (cigarettes cannot be sold to anyone under age 21, conspicuous signage about the law is required and all sales have to be face-to-face, not by vending machines, etc.). When MacDonald visited the shops, he saw in one case, brownies made with hemp oil, and in others, gummy bears made with hemp oil. MacDonald was concerned that the products were both high in cost and advertised mood and health-enhancing properties.

“The words ‘extreme mood enhancer’ caught his eye and then Patrick called me,” said Health Agent Robert Ethier during Wednesday’s meeting. “If you pay over $20 for a small package of gummy bears, that’s a giveaway. These products are being sold as ‘all natural,’ but the fact that (manufacturers) say they are not tested, makes me suspicious that they could be made with chemicals and fall under the town’s synthetic drugs bylaw.”

“If it’s not federally approved, then it is not regulated in any way, so there is no knowledge of what ingredients are there without analysis,” said board member Dr. Thomas Gleason. “You can’t sell it anymore until we know what’s in it.”

“The federal government has not weighed in on CBD yet,” she said. “As it is being sold in food products that would be attractive to children, I am inclined to say that while it is marketed as legal in 50 states and easily bought on the Internet, we will wait for the decision of the federal government on this.”

The board was assured by representatives from all four businesses that the products will remain off their shelves until the town lets them know. Any fines that might be assessed would be held off till then, too, said board member Catherine Phinney.

“If your objective is to get the product off the shelf and make sure it is not being sold at my client’s store, than it has been accomplished,” said Daniel Walsh, attorney for Speedy Mart.

Walsh said he understood that it would come down to a “technical analysis of the product to see if this falls under the bylaw. ”

But he was concerned about the way the CBD food items were handled by the town.

“Police coming into the store and confiscating the merchandise is pretty upsetting,” said Walsh. “These are people just trying to run a business, not endanger children in any way.”

Health Inspector MacDonald said he sees the products as falling into section 2C of the synthetic drugs bylaw, which was enacted in 2013 in response to increasing sales and consumption of synthetic drugs by minors, and one particular case where four adolescent girls became ill and one was airlifted to a hospital.

That section of the bylaw refers to synthetic marijuana analogues, or substances with a chemical makeup similar to that of marijuana or which has a “stimulant, depressant or hallucinogenic effect. ” 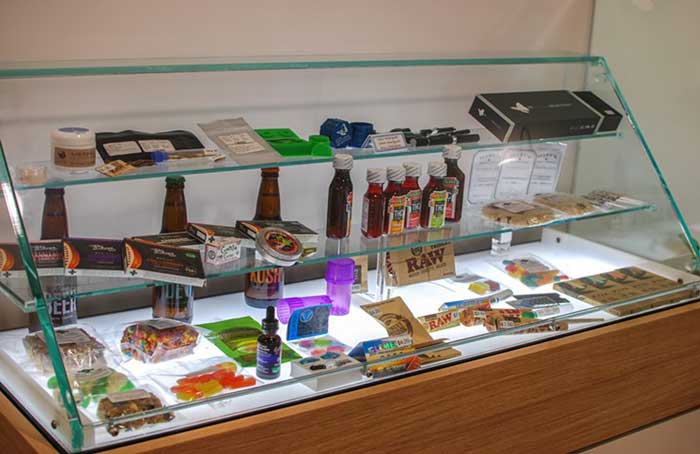 It is disturbing that the town acted unilaterally, without citing specific threats or evidence that the items seized posed any threats without first researching the products to determine whether they actually fell into the category of dangerous synthetic substances, which by the narrative here should have been simple to resolve, since these products are clearly organic in origin, and there is no such scrutiny on off-the-shelf supplements manufactured by large commercial supplement companies - which do carry inherent risks if abused. AFAIK, there has never been any studies which demonstrate that CBD compounds are dangerous to any degree. When government acts out of fear and unfairly targets a segment of a market, the consumer always suffers the consequences, whether it be in increased costs from oversight or extra-high taxes levied against new products that threaten the status quo profits of established suppliers. This kind of anti-consumer fascism is yet another example of government overstepping its responsibilities, and demonstrates the need for society to reject and replace current leadership with candidates who respect consumers to judge for themselves - in this case, proven by centuries of empiric evidence of cannabis' safety and effectiveness. Today is Election Day, so I hope somewhere that these changes are taking place.

Straight people don't know, what you're about
They put you down and shut you out
you gave to me a new belief
and soon the world will love you sweet leaf