This design is based on Stevehman's recirculating NFTish grow. The only revision is instead of the "U" shape the tubes are both fed from one end, then join together to drain back into the res. 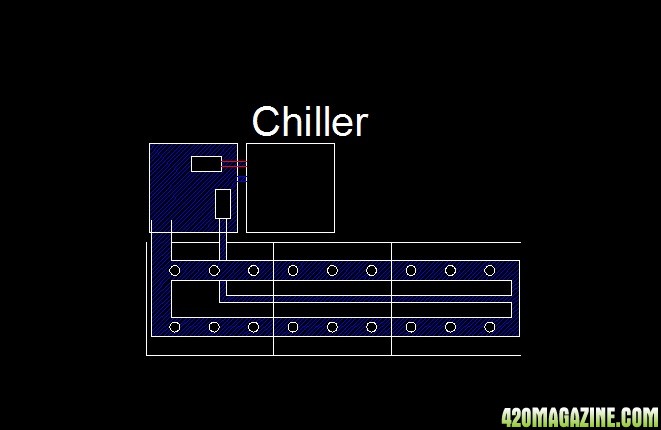 So yesterday I received my new EZ Clone 60 and took 6 clones from each of my 4 - Barney's Farm G13 / Haze mothers. That gives me 24 clones to populate my system of 16-18 plants and at least one of each to replant and LST from the start.

I had decided that plant 10 was less flavorful than plant 8 even though both had grape overtones with a haze finish. I was going to cull it but decided to give it another shot... don't know exactly why I guess I wasn't ready to give up on the genetics.

Here are the summaries from the last grow on these 4 plants.

Here is a shot of the EZ-Clone 60 and my Advanced LED's 180W all blue veg light. 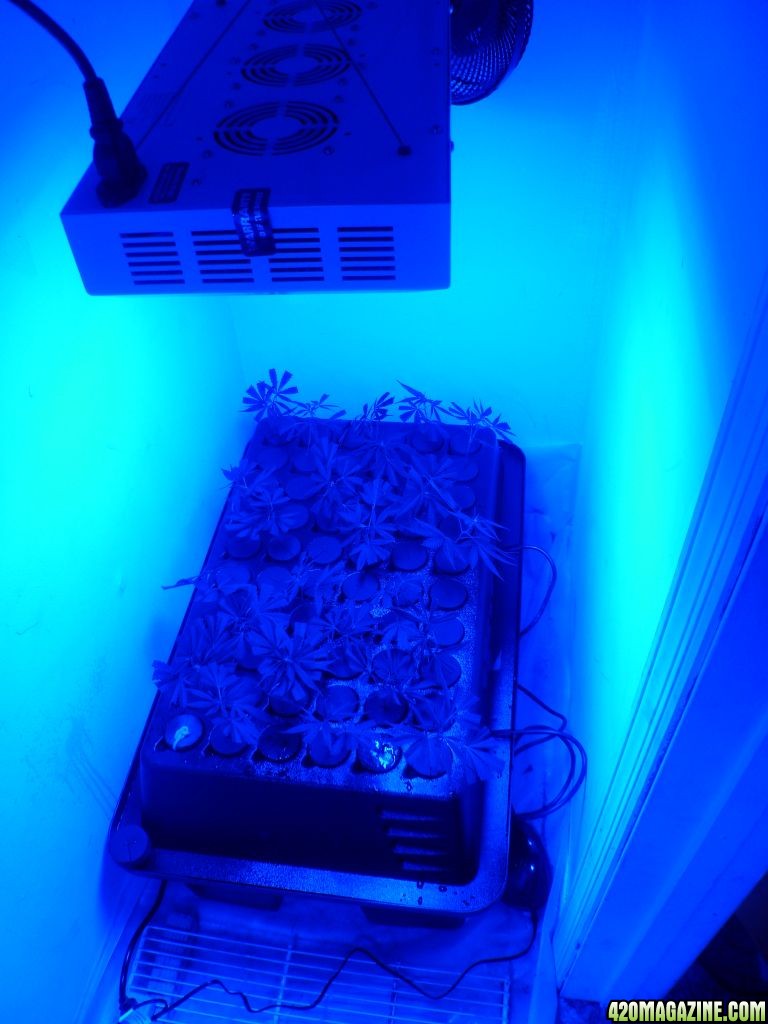 A little tighter shot on the clones: 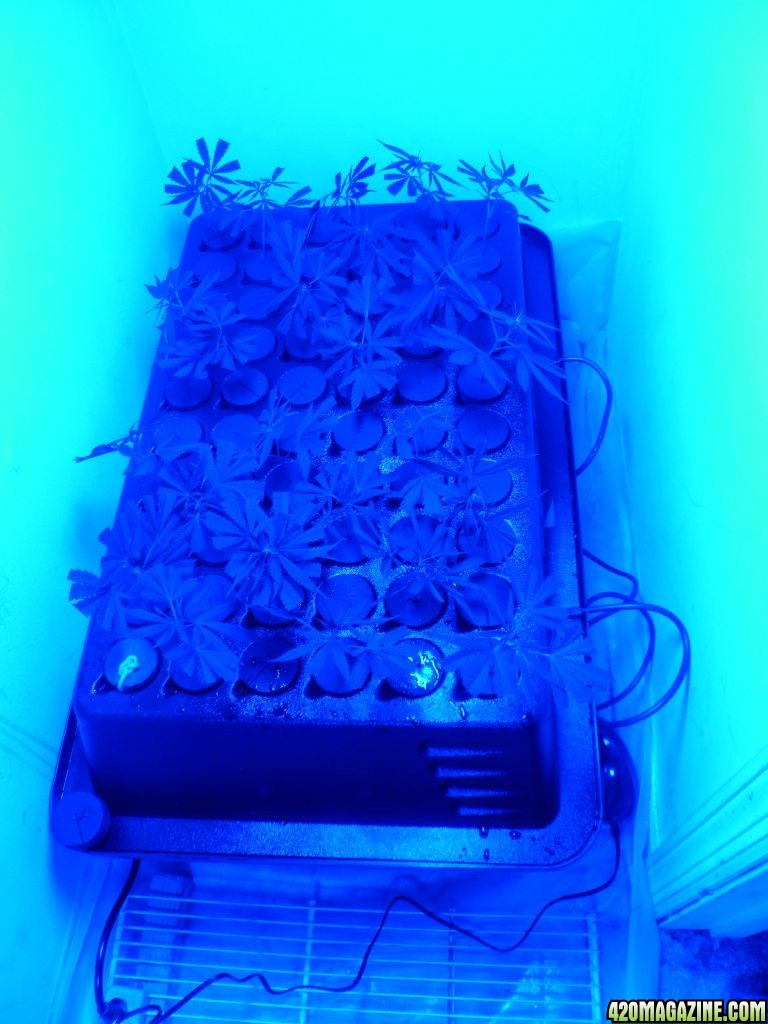 There has been about a month of downtime since my last grow ended, mainly due to an ill fated DIY bubble cloner - henceforth known as the cloneslayer. I made the decision (bad) to have my stems submerged, I had seen it work on youtube both submerged and not so I opted for submerged figuring it was less risky. They all developed rot on the stems and I pulled them after about 2 weeks.

Because of all the downtime my mothers were way out of control. I took my clones trimmed about 2/3 of the branches and decided to try my hand at LST. I would like to have stringently consistent clones for the purpose of comparison growing. So the plan here is to take the long lanky mom and bend it over, hopefully the shoots off the side of the main stem will turn toward the light and make me a nice row of even sized clones.

I used 2 oz fishing sinkers to weight them down, we will see what happens. If they die I have replacements in the cloner... 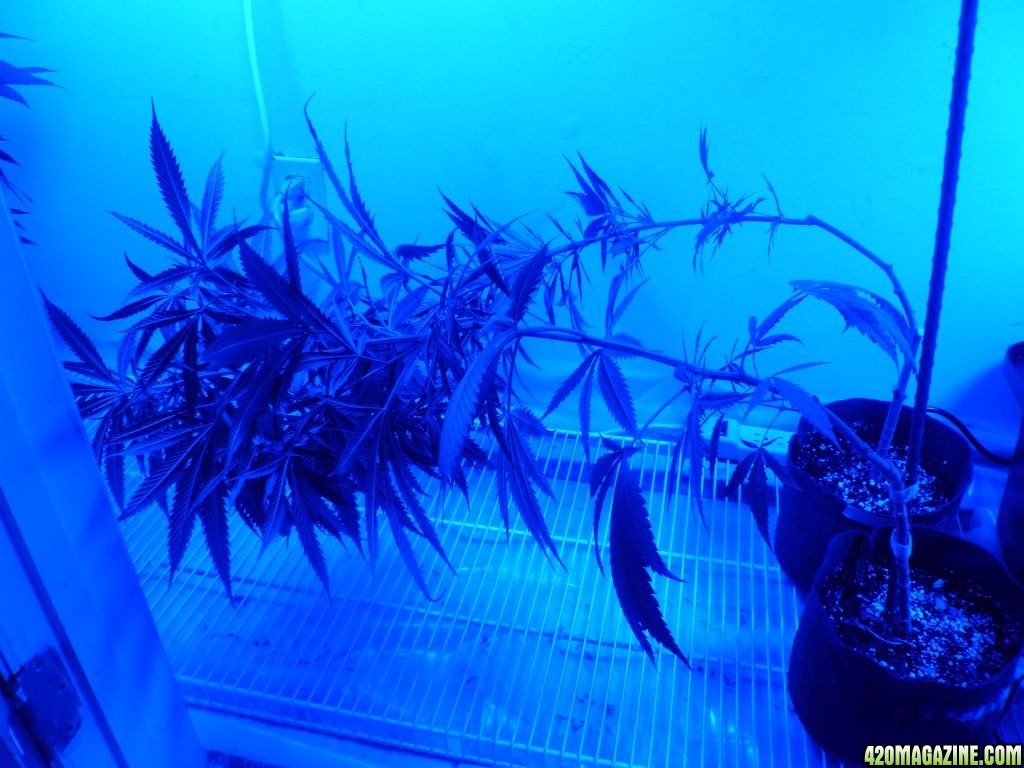 And here is the start of the DIY StevehmaNFT system: 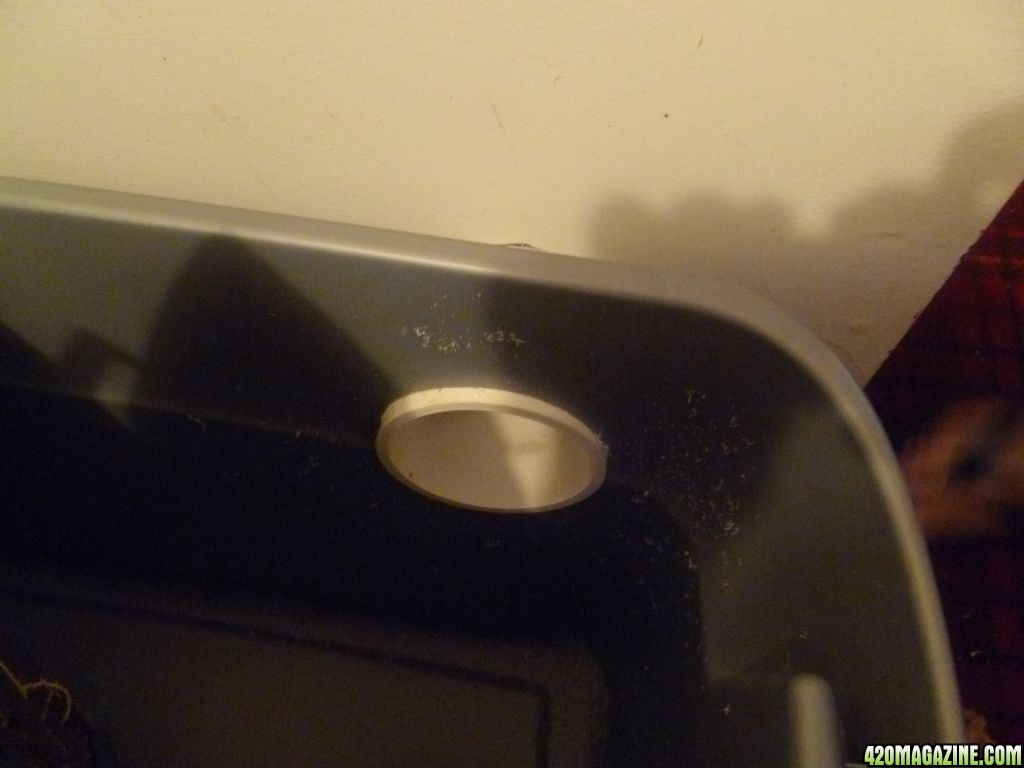 I drilled into the tub sandwich (2 rubbermaids with polyurethane foam in between) and then placed a section of PVC in the tub, leveled it and marked the wall. I drilled one side of the wall but must have drifted a little when I drilled the other side because the pipe now points down.. so I have to re-drill and then move on. More pics to come.
Maer's -=760W ADVANCED LED= CO2/SGE/Water Cooled - G13Haze - DIY NFT 4" revised SteveHmaNFT Style - Grow 4.0 [3.0]

One experiment I am thinking of for this grow is to use one of my 180w veg lights in the first two weeks of flower. The thought is similar to the thinking people use when they supplement the first two weeks of flower with MH. I am weighing the pros and cons of this and will decide later.
Maer's -=760W ADVANCED LED= CO2/SGE/Water Cooled - G13Haze - DIY NFT 4" revised SteveHmaNFT Style - Grow 4.0 [3.0]

I am also considering trimming all the fan leaves off my moms.. I am thinking what purpose do they really serve?
Maer's -=760W ADVANCED LED= CO2/SGE/Water Cooled - G13Haze - DIY NFT 4" revised SteveHmaNFT Style - Grow 4.0 [3.0]

That 60 site cloner was the best investment I've made. 100% success rate, super easy and you can do 60 clones at a whack. I use every other hole and do 30 for my gorws and pick the best 20.

stevehman said:
That 60 site cloner was the best investment I've made. 100% success rate, super easy and you can do 60 clones at a whack. I use every other hole and do 30 for my gorws and pick the best 20.

I like the mods on the plan for the NFT, can't wait to see that thing in action.
Click to expand...


I paid about 260 with shipping so I consider it a good deal. I was going to do a DIY aero but preventing leaks is a big problem so I went this way. The molded top is awesome with the finger holes to make removing the inserts easy. Also the molded wire / hose ports are a big plus.

So today did not get a chance to build any of the NFT system but I did get a few things done. First I emptied my RO res and wiped it down with 91% isopropyl. Also wiped down my bubble wands and the tubing.

I trimmed my moms of all fan leaves, I shortened the main stem on one of them to make it fit under the lamp. It seems to be working, the side branches are turning toward the light and the ones on the bottom of the stem are making their way around the stem to run side by side the one from the top. Here is a shot of the pruned moms, I also lowered the light to 14" above the canopy. 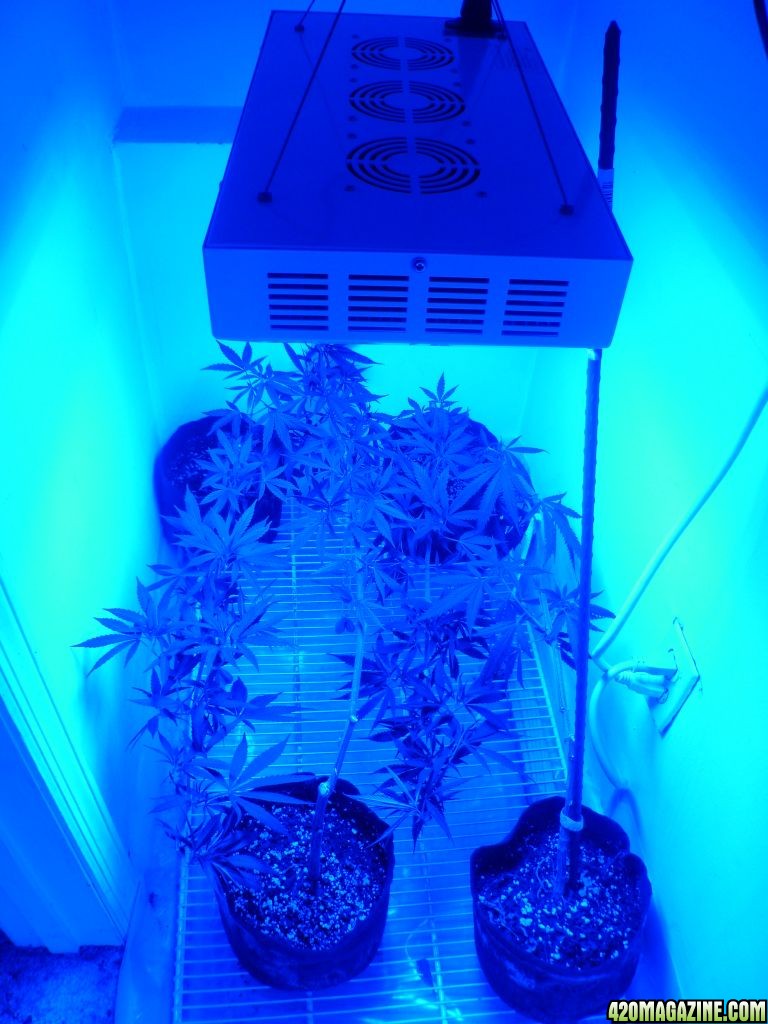 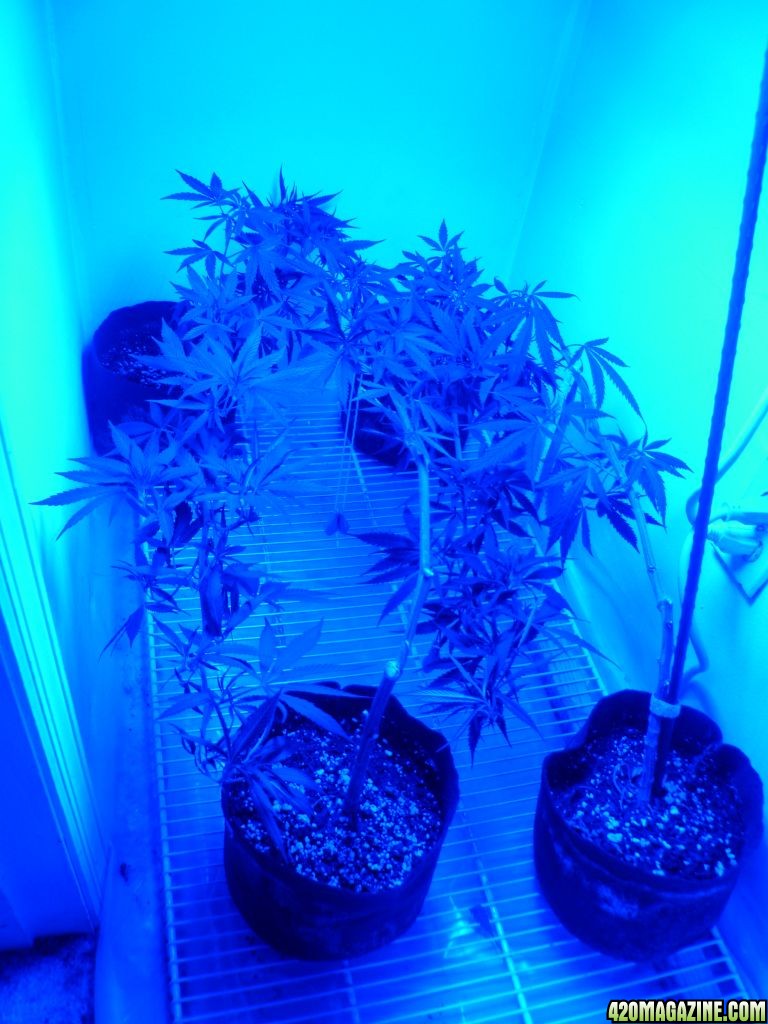 Here is a shot of the clones, I didn't have the full 7 gallons of RO when I set up the EZ clone so I added 2 gallons more RO and checked the stats... The meter read 8.5 when I put it in and I almost shit my pants.. it leveled out to 7.0 which is still high but ok for now being that there are no roots. ppm is at 32. But it is nearly 80 degrees in there!!! I did add the clean rez they sent with the EZclone, hopefully that will fight any outbreaks. Don't know if I should be thinking of a chiller or what. 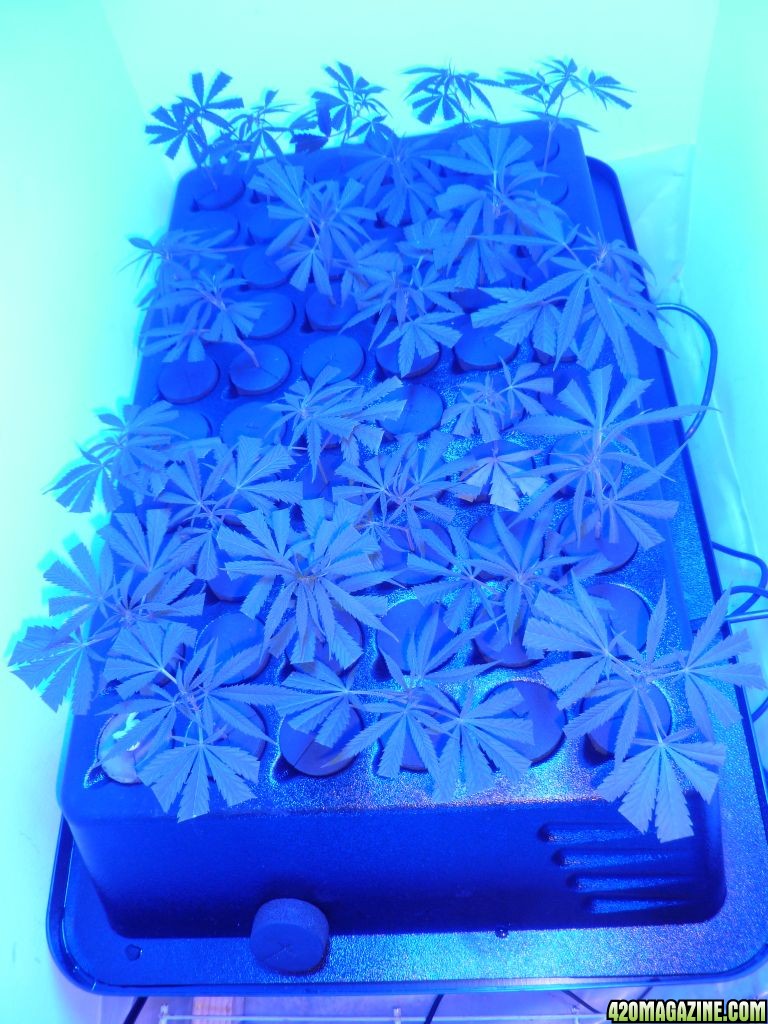 I checked my clones today and only had some shoots on a few, it has been 6 days. Since last time my pH fell to 6.9 (from 7) ppms stable at 32. I moved the EZclone to my now empty flower area because it is cooler and has better air circulation. The res temp was about 86F so I hope this will drop that significantly. I added half strength clonex solution and 2 capfuls of clean res. ppms rose to 600. pH is now 6.1.
Maer's -=760W ADVANCED LED= CO2/SGE/Water Cooled - G13Haze - DIY NFT 4" revised SteveHmaNFT Style - Grow 4.0 [3.0]

Maer said:
The water temp today was still 82. I added a frozen 2l, dropped to 78... A half hour later it was back at 80. I need more and smaller frozen items, I am thinking of frozen water bottles, buy a couple cases and swap them out 6 at a time.
Click to expand...

I did that my first grow, it was a headache, but will keep the res cooler than ambient. If you can't get the temps down, make sure you are aerating the heck out of it. And maybe consider a Zone type product to keep any bad things from growing (although it kills the good things too). Once you have the extra funds I would pick up a chiller.


I just realized you're probably talking about the ezcloner reaching higher temp. I don't worry about mine much. The roots aren't in the res, plus the aeration that it receives is pretty high as well. I've never even checked the temp, pH or any of the numbers on mine. Just follow the instructions, filtered tap water, (not R/O) the clonex gel, and I add a couple drops of superthrive.

I have been adding the clean res the gave me with the EZ clone, they say a couple ounces every 5 days. It is in fact dilute bleach so I may switch to that after I run out of clean rez.

The real problem is it is 7 days today and I have very few roots. Some little spikes, some bumps, but some have nothing... making me crazy.

I don't use the clonex solution, I just dip the roots into the gel. You should start seeing some growth very soon now. Once the little bumps form it's just a few days before you have a root explosion.

Do you scrape the side of the stem to encourage root formation? This was a technique I used when I was using rockwool and it worked well, but I am thinking maybe it is not winning in hydro apps.
Maer's -=760W ADVANCED LED= CO2/SGE/Water Cooled - G13Haze - DIY NFT 4" revised SteveHmaNFT Style - Grow 4.0 [3.0]

Absolutely! I scrape the bottom 3/4 inch of the stem, just about all that is below the neoprene collar. I want to create as many roots as possible, the more the better. I want them to become nutrient sucking machines when they hit the NFT. I think in any application more roots=bigger, healthier plants.
Current: 7.0
Finished: 3.0 4.0 5.0 5.1 6.0 6.5
Lessons Learned
LED Buyer's Guide
Monthly Contests
M

Maer said:
Nice I was starting to feel lonely with just me and Steve.
Click to expand...