OK - I'm about 6 weeks into building my basement rooms for veg and flower and growing. Veg room is pretty much complete and the flower room is almost done.

I got some clones going early on but because the boneheads who gave me the clones started them from flowering plants, it took them a little while to get going. One immediately went nuts and is about 18" tall while the other 2 from friend #1 (came in cups) are about 10 inches. The three from Friend #2 came in 1 gal. containers but they were like little buds when I got em and are a little wimpy (no Mycorrhizal tabs for them though - gonne step 'em up to 2 galloners and add the tabs and see how they do.

I did, however, start some from seeds.
Thai'tanic - just sprouted a week or so ago. x 3 (out of 5 - 2 didn't sprout)
Big Buddha Cheese - been goin a little longer. x 2 (out of 3)
Short Stuff #1 - for instant gratification - already flowering under 20/4 - started flowering after 2nd set of 5-finger leaves. One sprouted instantly in the paper towel. The rest took a little while longer so they're a little behind. They were 5 freebie seeds - 3 girls, 1 boy and 1 freak - If it turns out to be a girl it'll probly make a 2-gram bud-lol. If not - dead freak. I'll let it go until I have a replacement for it. Gonna make some seeds when the male starts dropping pollen - for the next batch.
AK47 - 1 seed given to me by a friend. Should be outta the soil in a couple days. Hope it's a girl, but if it's a boy I'll cross it with the Short Stuff for fun.

Already did the noob stuff - over-watered some, over-fert a few others and heta stressed a couple dialing in the light distance. I'll post some pictures later and start keeping it up from there.

400 Watt MH in Veg, though using HPS on em right now for the flowering SS#1. 400 Watt HPS in the flower room (when they get big enuff).

Sprout cupboard has 2 4' Shop Lights with aquarium bulbs - yes, those are headed for an upgrade shortly.

Using some Mycorrhizal tabs to start 'em off. Heard great things about 'em and from what I've seen, they help a lot. Will do some experimenting later on. 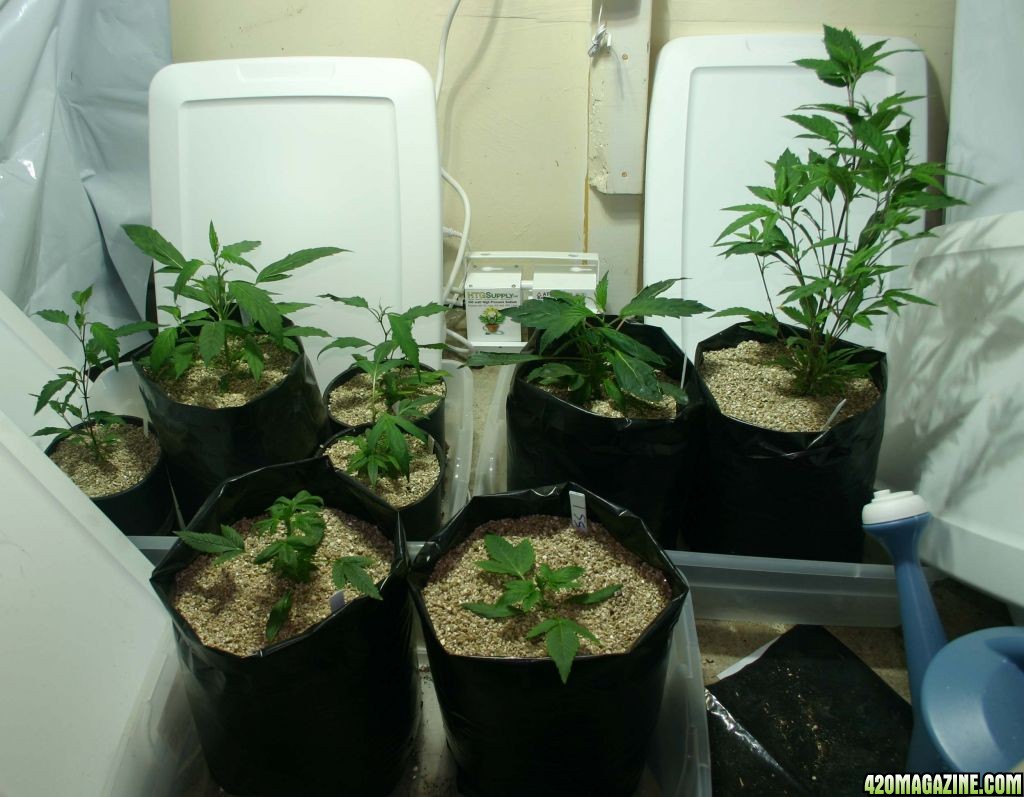 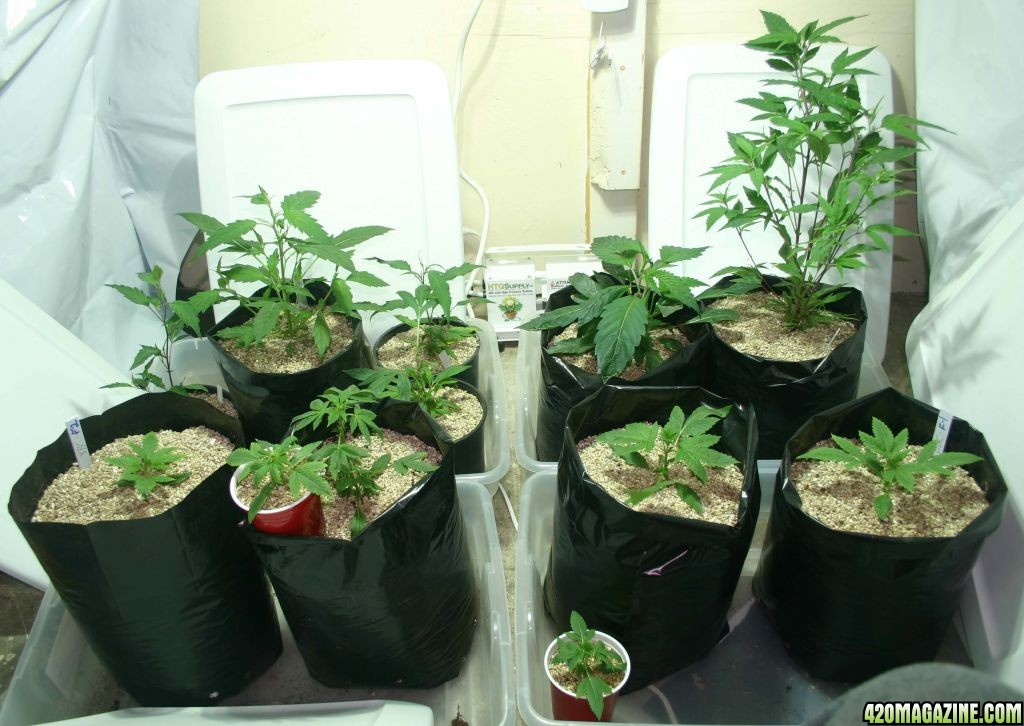 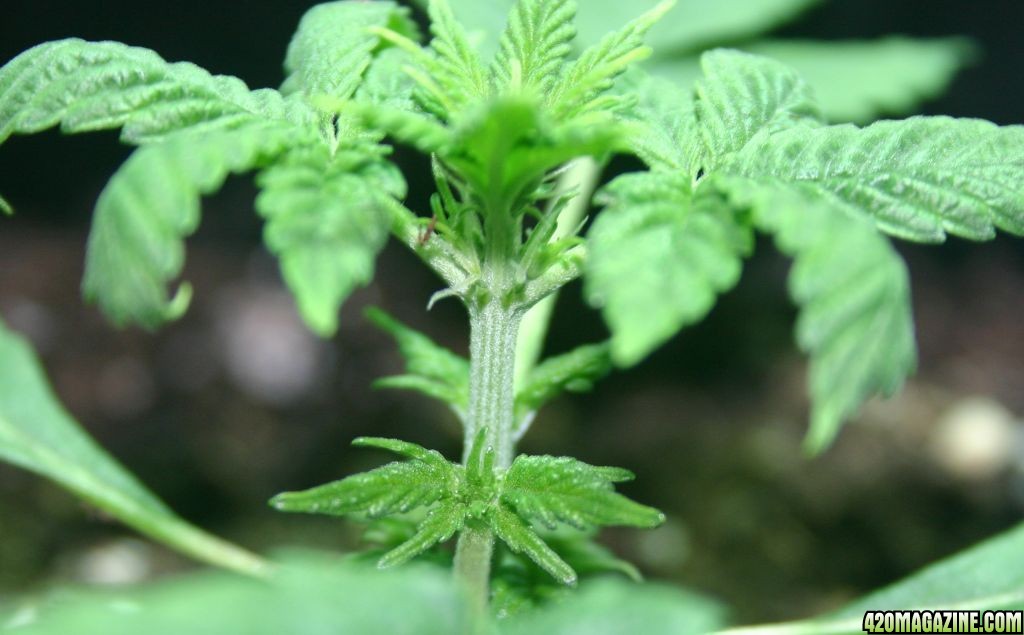 Is that pure vermiculite?

What you can see is pure vermiculite to knock back the fungus flies. My soil is about 25% Perlite and basic bag soil. Here's the group shot from yesterday - I've moved them around a bit but there's a lot more green in there.

It's a real bitch to try to color-correct for HPS lights but I tried. My Panda Plastic walls aren't really green - lol. 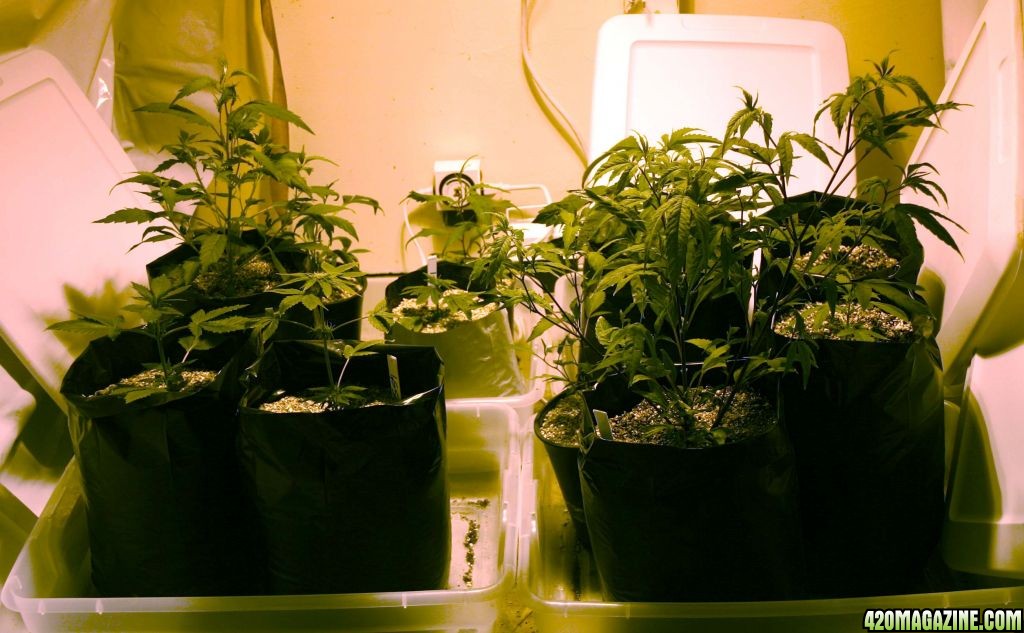 Here is a shot of the happy couple - Short Stuff #1. They put out 5 sets of leaves and then started flowering. Gonna make some seeds - save some pollen, maybe do a couple of crosses. See what kind of stubby plants I can grow. The fun stuff. 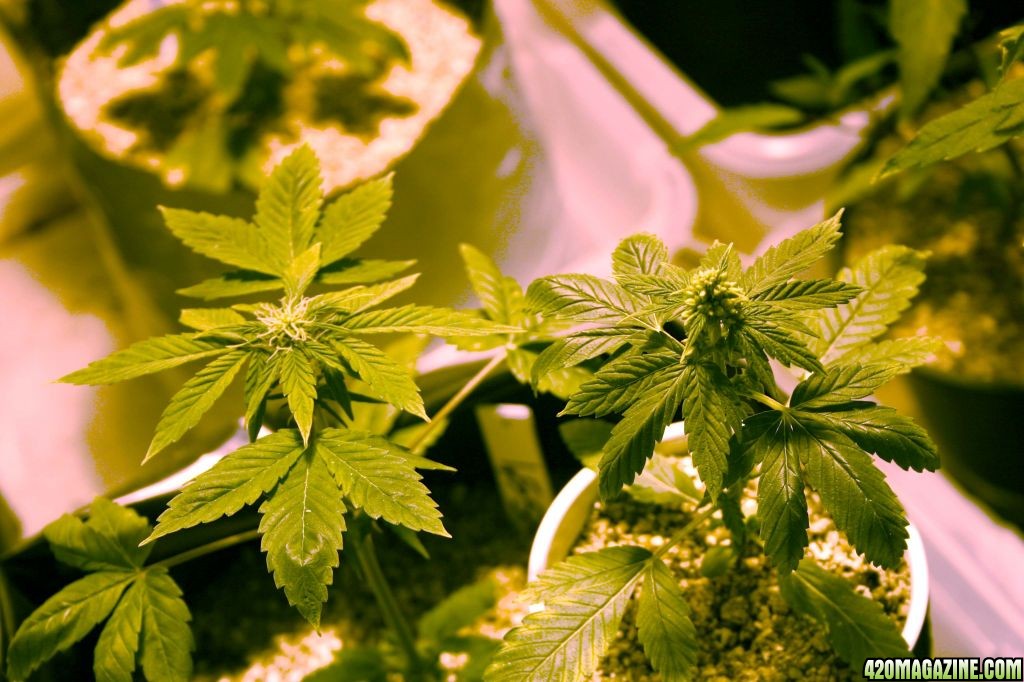 Miss my basement. Nice set up, should be very successful grow. Welcome to the group!
OldSkoool

one thing you can do to help correct the color with HPS is to use the "tungsten" setting for white balance. That will remove a lot of the yellow.

one thing you can do to help correct the color with HPS is to use the "tungsten" setting for white balance. That will remove a lot of the yellow.

Thanks - the results are a little better, but still hard to get right. I guess it just is what it is. Nothin like having a camera with a crapload of settings you don't know about or understand. Now I know a lot more about my camera. Canon EOS Digital Rebel, 6.1MP but takes some nice shots.

Here is a shot of the "Groom". 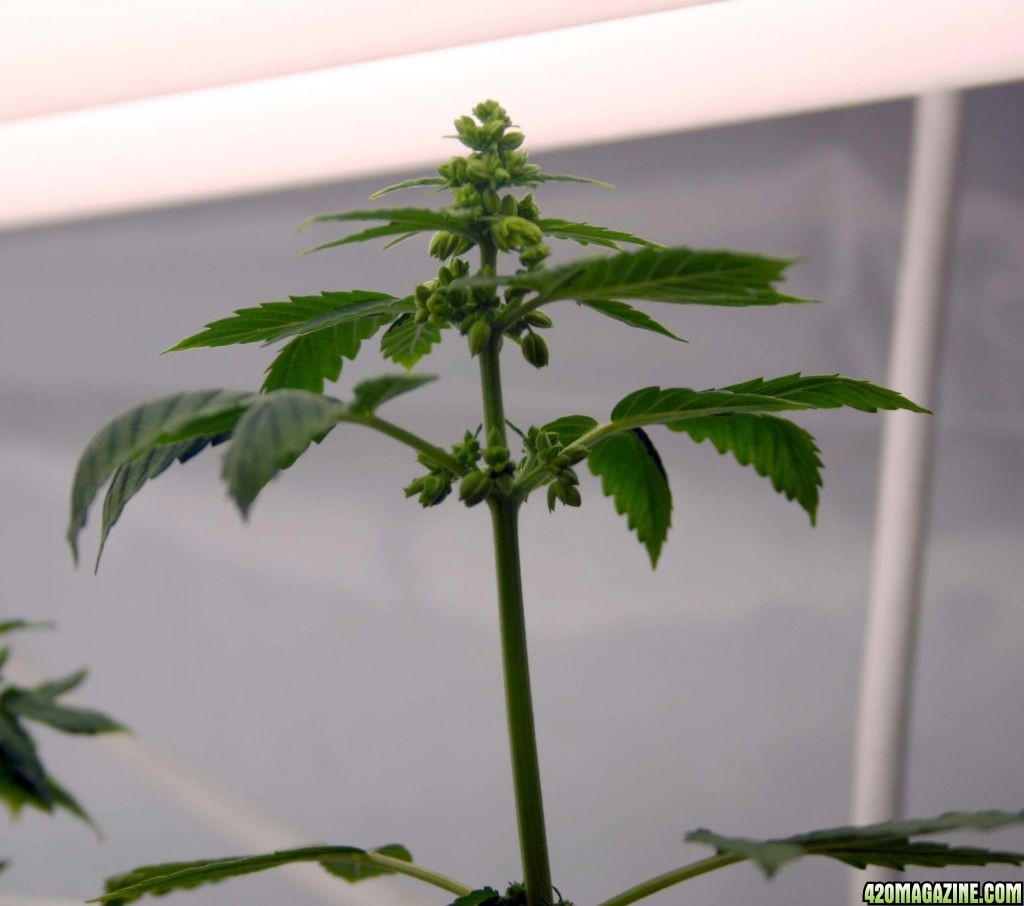 OldSkoool said:
Miss my basement. Nice set up, should be very successful grow. Welcome to the group!
Click to expand...

Thanks,
Looking forward to doing some good things downstairs. Soon as I kill off the spider mites.
"For one more time
Let your madness run with mine"

Turned on the flowering room so I could move the light down a bit for the shorter guys. Put a MH in there 'cause they have a little more vegging to do. Probly knock it down to 12/12 in a week or two. 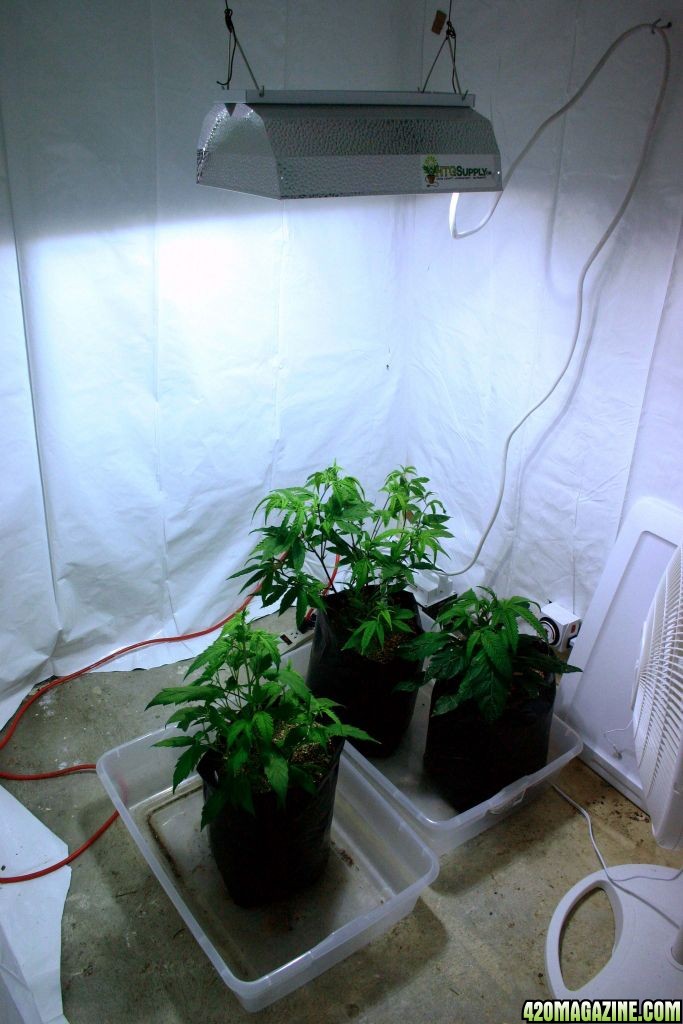 Finally got some 2-gal bags so most of the little guys have a new bag though I put the Thai Tanic in 1 gal. pots. Not for too long. Note the Clone Closet on the right. Just put 2 Agrobrite 4 foot 40 watters in it. Should be fine for clones & sprouting. 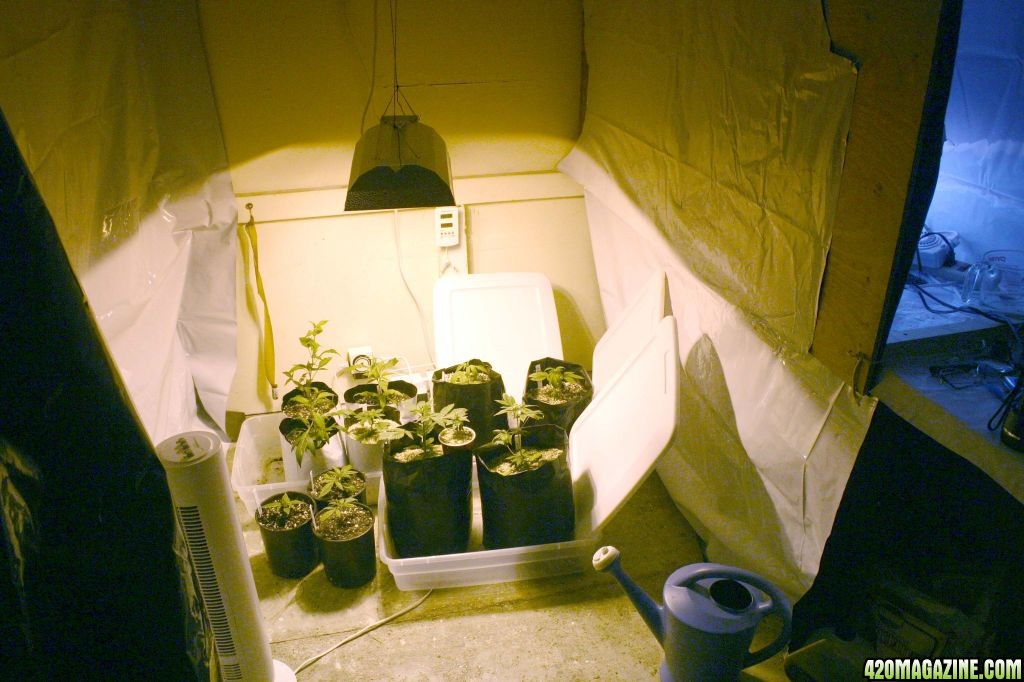 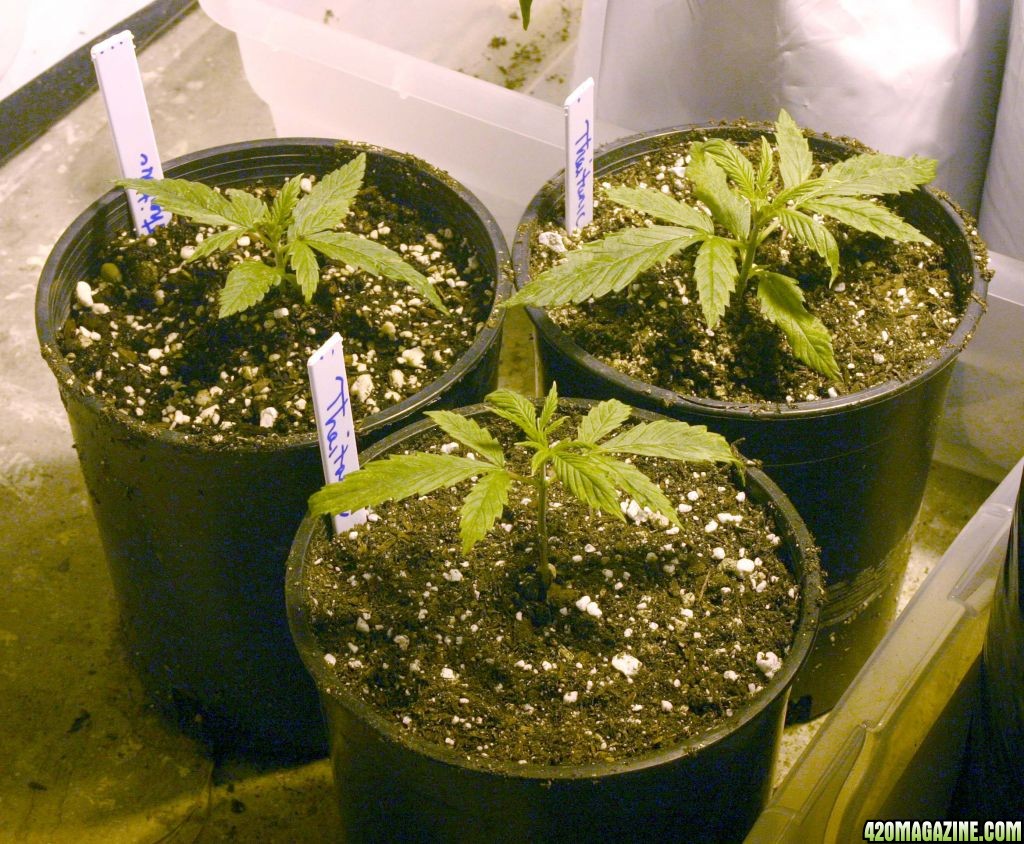 And then there's the FREAKAZOID!! Short Stuff #1 a dwarf dwarf. 3" tall and flowering female - lol. Probly end up with 1 reefer out of it. (Yes, that's a plastic kegger cup.) 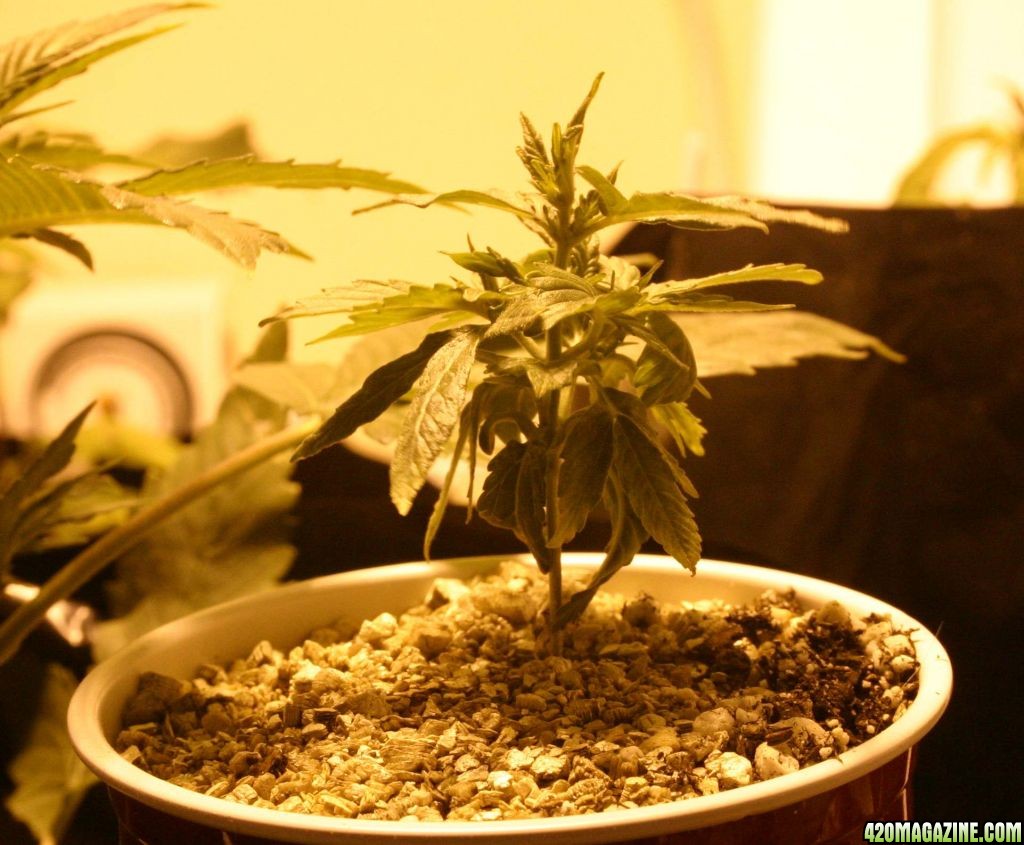 Well,
Everything is progressing. The male SS1 is ripe (The Groom). 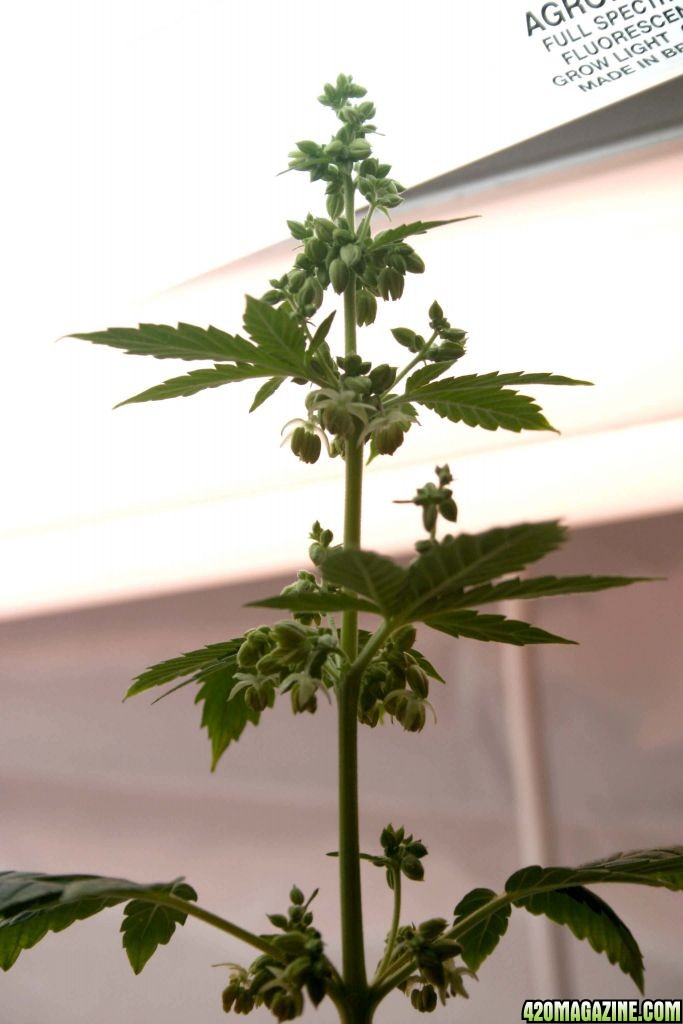 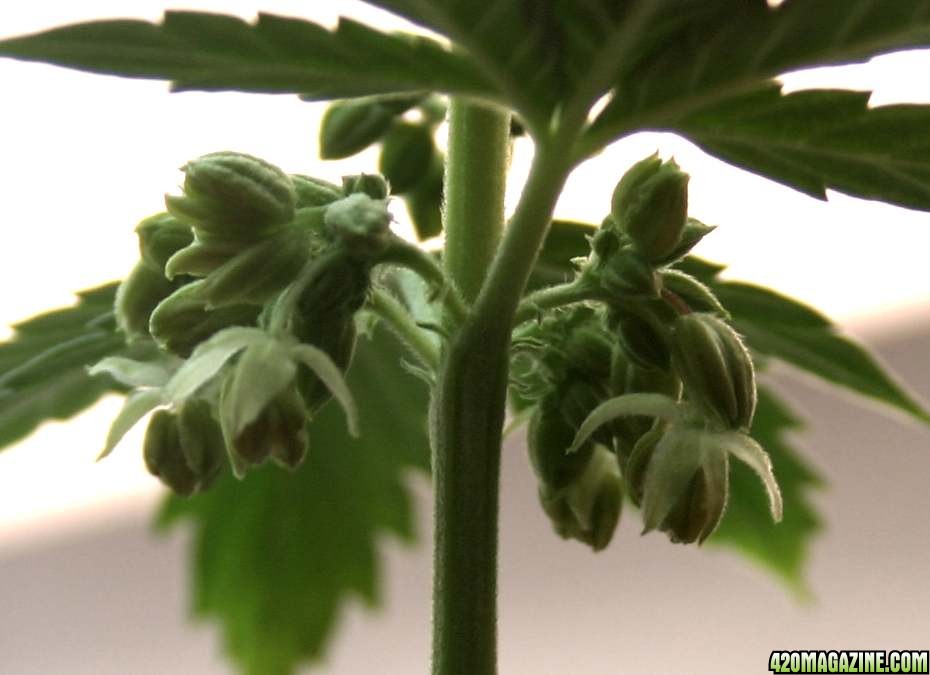 And the collection bowl. 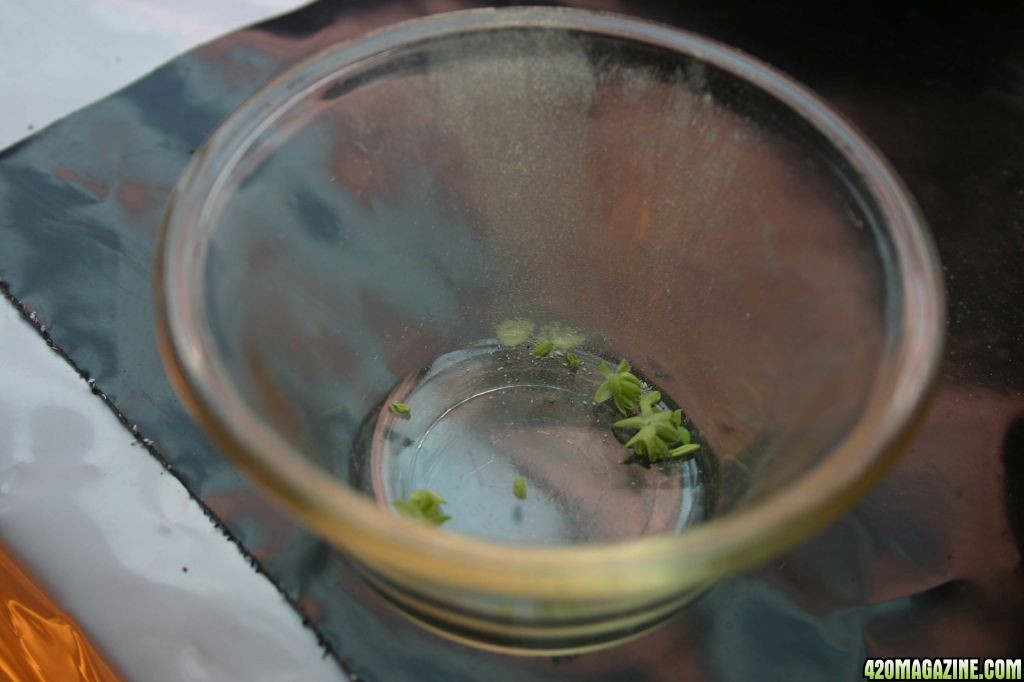 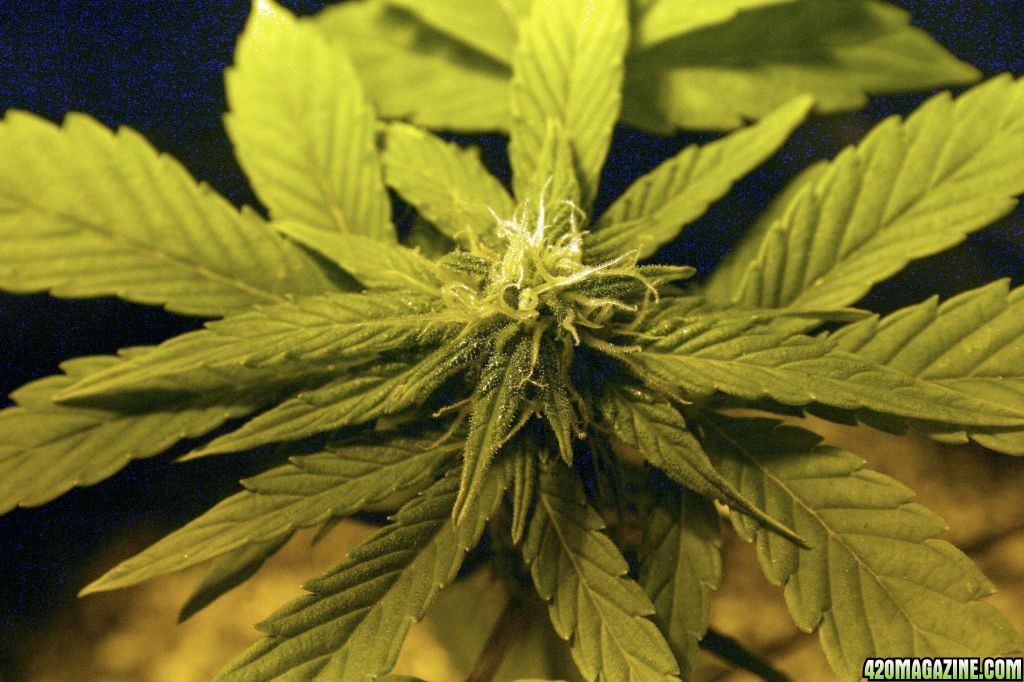 Well, not the terminal bud, just a couple of the popcorn buds down below. Of course it's pollen. The slightest breath can send it flying. I would be much more careful but my regular girls are weeks from flowering so there's really nothing but the SS1 to make seeds anyhow. I'm gonna need more seeds for what I have in mind.

More next time.
"For one more time
Let your madness run with mine"

I am such a freaking NOOB! I mde all the noob mistakes outlined in my first post and now I have outdone myself.

Finally got a pH tester after wondering why everything seemed to be slowing down and exhibiting a variety of problems. I expected acidic soil but I was very wrong. The pH was up around 8.0. LAME!! I immediately watered them with vinegar in my water - about 2 tablespoons per gallon. This started bringing the pH down but not very quickly and everyone was still looking pretty sad. I probly overwatered them a bit but I hit them with a dose of water with 3 tablespoons of vinegar (brought the water down to 5.0). That did it. They are all now below 7 and most around 6.5 with a couple close to 6.0.

They have all put on a burst of growth in the last couple of days and that makes me happy. When they were ailing I felt almost as bad as when my cat or dog get sick. I actually care about them. Goofy I know, but I'm sure some of you feel the same way about yours. I'll post some more pics soon.

The SS1 seems to be flowering right along.

Grow Bags are awesome for checking pH at root level - already have the access holes.
"For one more time
Let your madness run with mine"

But, even having that male in by the rest gives me goose bumps

My nerves just couldn't take it.

OldMedMan said:
Hi Buddy,
I know you know what your doing.:439:

But, even having that male in by the rest gives me goose bumps

My nerves just couldn't take it.

Haha - I hear ya. If I had some girls in the flowering room I probly would have exiled the male to somewhere far away. Since this is my first grow, the only girls are the SS1 I want fertilized and then the pollen doesn't remain viable for too long.

When my other plants begin to mature, and I have males showing, I will just clone them and grow them upstairs to make pollen so I can get seeds and make a few crosses or fresh seeds. Don't want to have to send too much money to Amsterdam - lol. All this stuff is just too much fun anyhow. AND LEGAL!
"For one more time
Let your madness run with mine"

gromper said:
Haha - I hear ya. If I had some girls in the flowering room I probly would have exiled the male to somewhere far away. Since this is my first grow, the only girls are the SS1 I want fertilized and then the pollen doesn't remain viable for too long.

When my other plants begin to mature, and I have males showing, I will just clone them and grow them upstairs to make pollen so I can get seeds and make a few crosses or fresh seeds. Don't want to have to send too much money to Amsterdam - lol. All this stuff is just too much fun anyhow. AND LEGAL!
Click to expand...

OK - everyone seems to be recovering well from the pH fiasco. So here are a few pics. But first, a correction - I used about 2 teaspoons of vinegar per gallon - brought the pH of the water down to close to 5.0 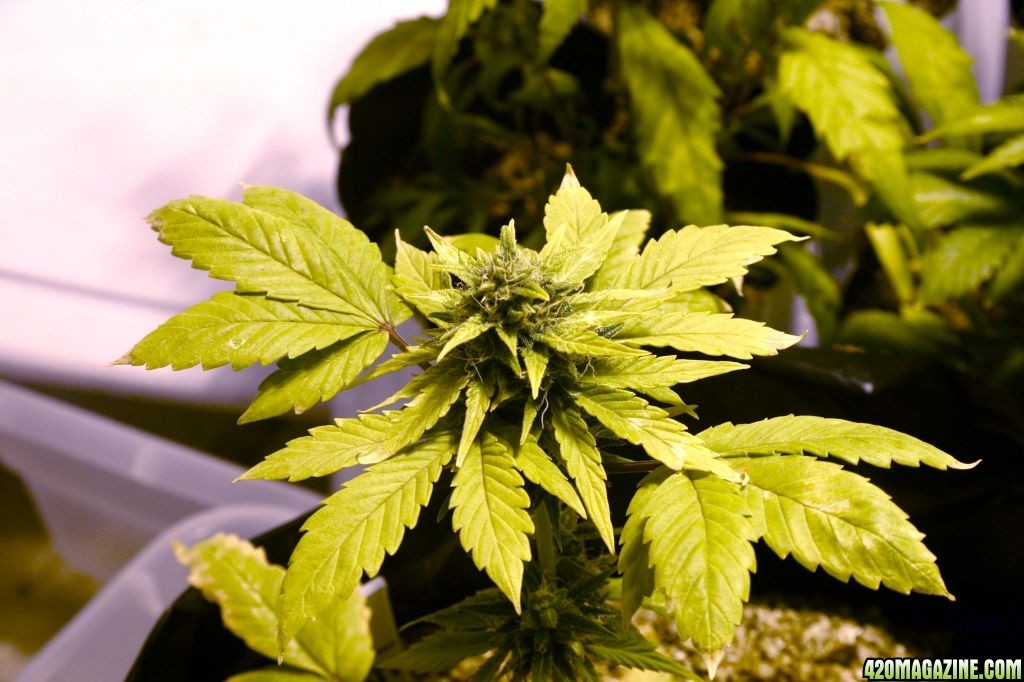 Note the seeds developing on the lower buds. The next generation. These will be even juicier in a couple more weeks. Don't know how long they'll go before the trichomes start to change color but on this one I'm gonna wait long enough to be sure the seeds mature. 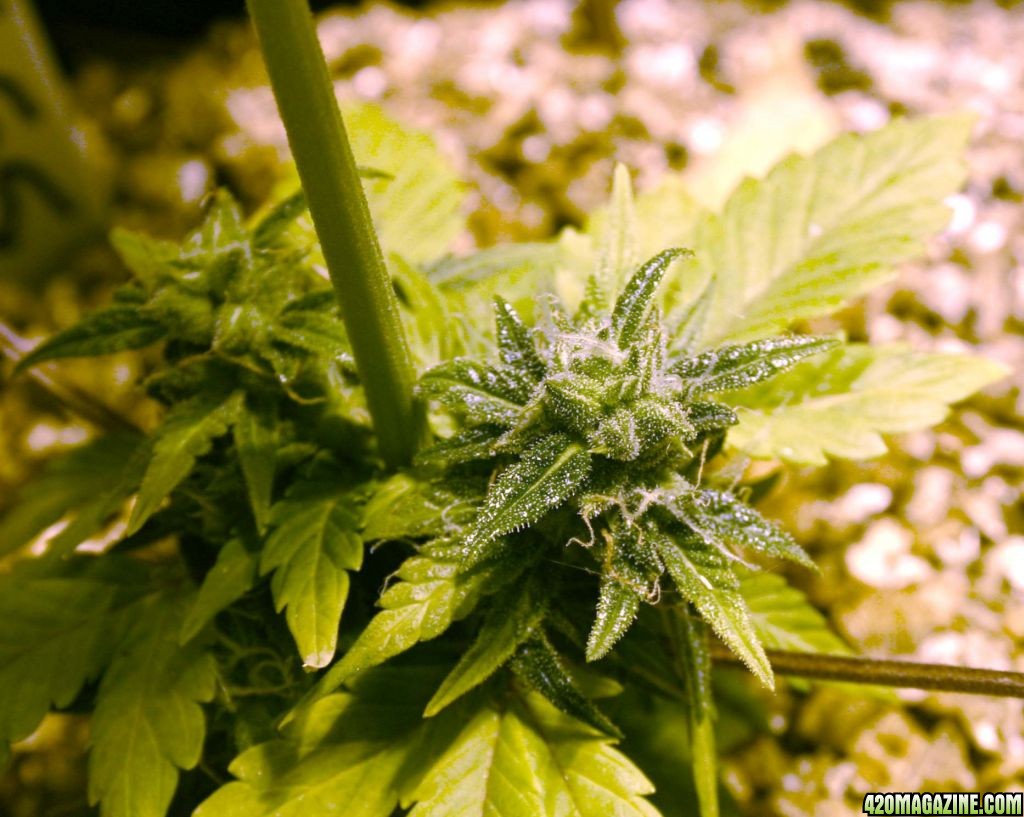 Here's a couple close-ups of the seeds developing for my next run. 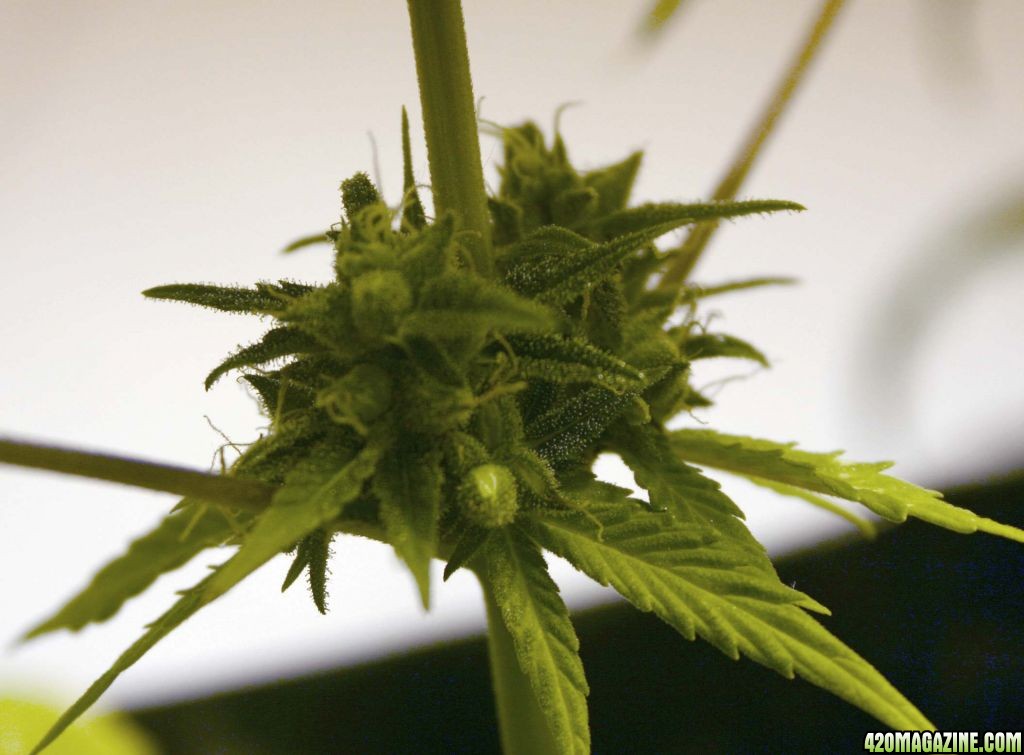 This next one is 12" and moving right along. (Color is a bit off). Cute little things. I can't wait until I can try again and not make all those dumb mistakes. 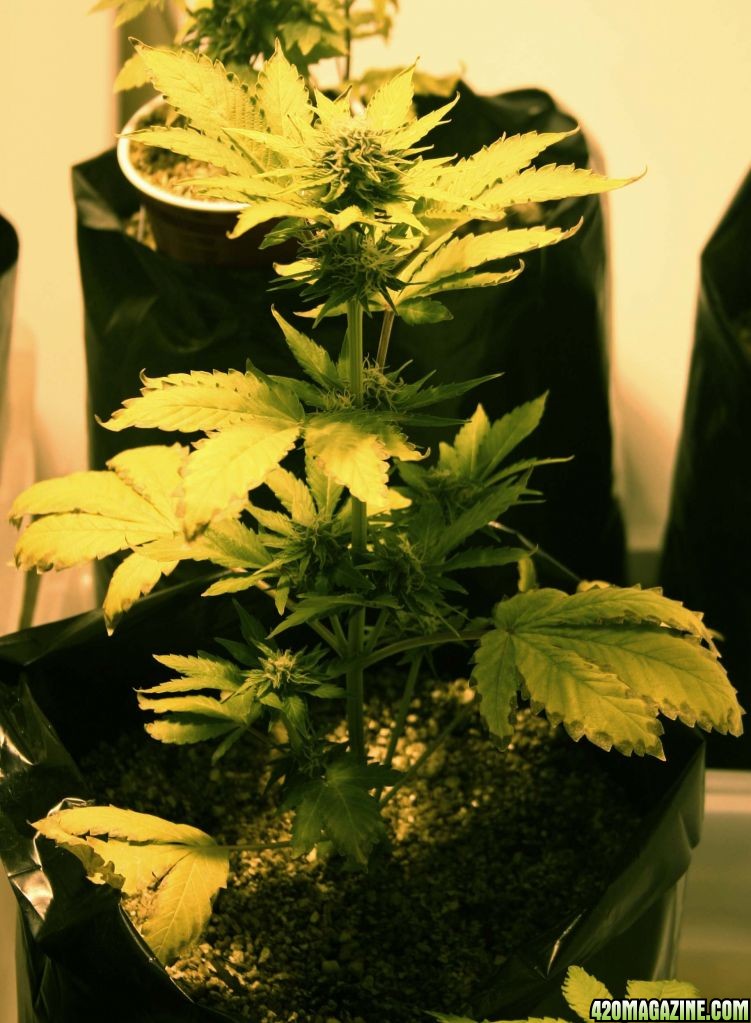 Here's two in the flowering room - another few more inches and the room will be on 12/12 permanently and I'll just rotate in 2-footers to start flowering and harvest as any mature. 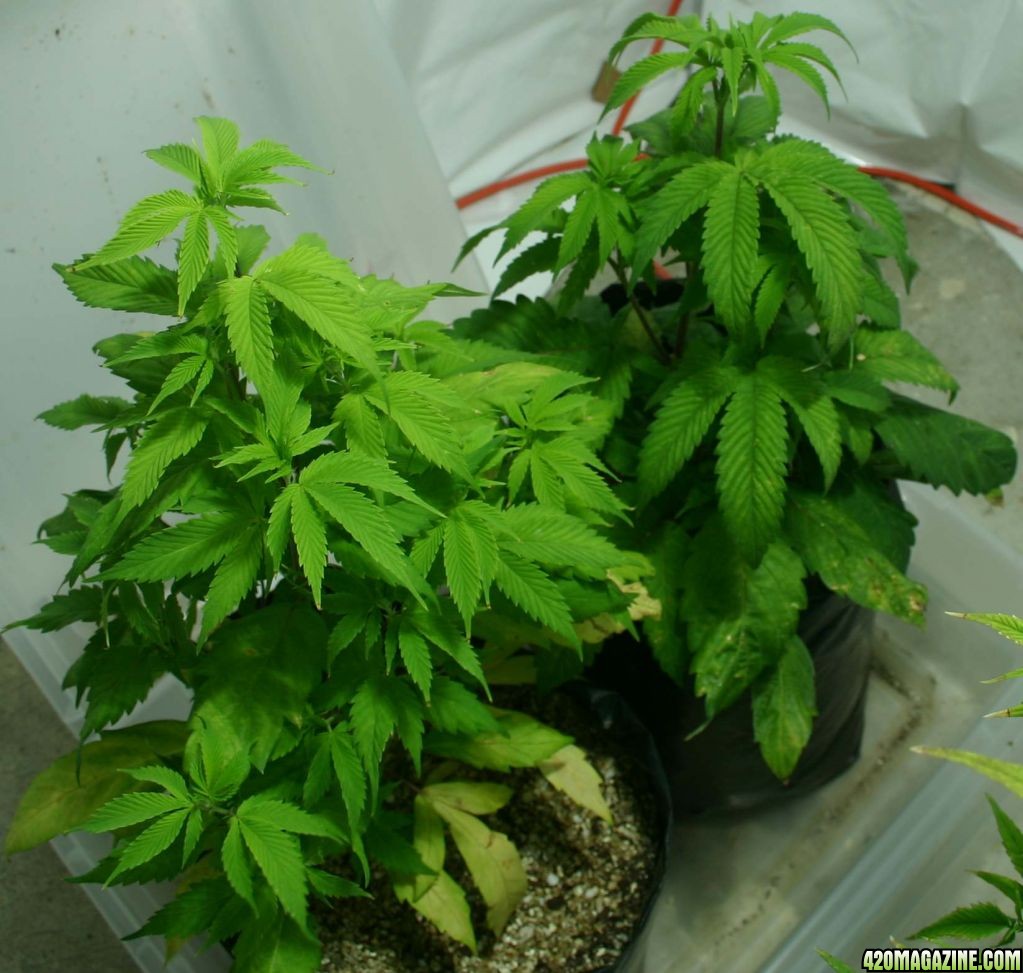 And last but not least - the 4-inch Freakazoid. 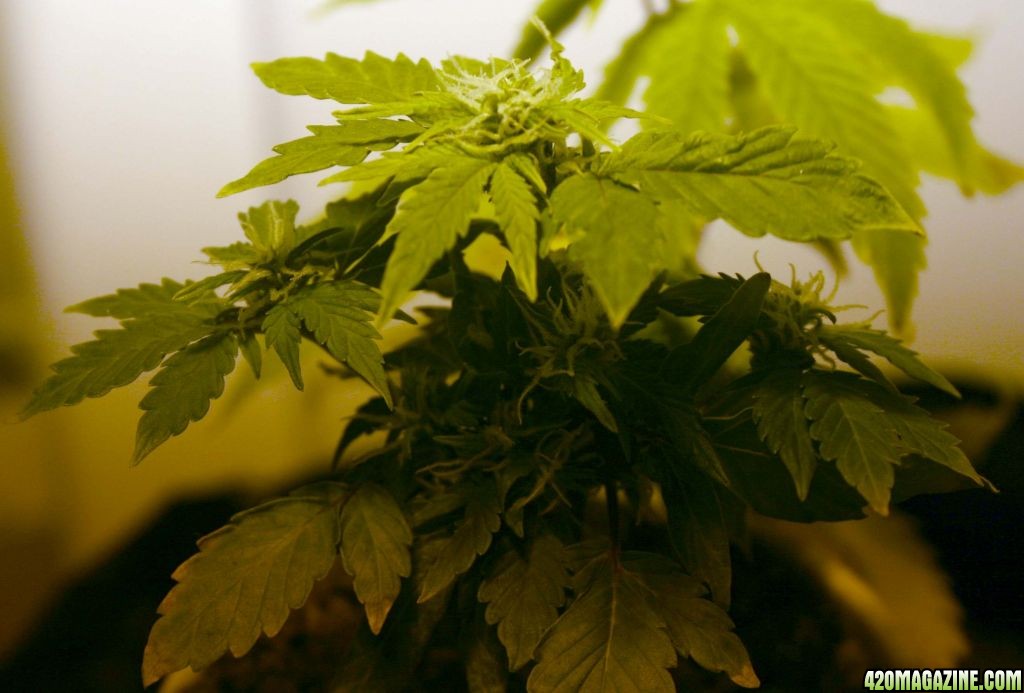 OK - the flower room is on 12/12. My plants look like crap but they're still growing. Fixed the pH prob but still water them with 5.5 water just to keep it down.

Now for the fungus flies. Got some nematodes to help deal with the infestation. Yeah, it's bad.

One drawback to bagz, there are holes in the sides that can be easily accessed by passing flies. I think the nematodes will do the trick. Will update on this when there is something of note to report. Yellow cards collect a lot of adults, too fast. Have several replacement plants coming up well. Shoulda replanted sooner.*

My little Short Stuff #1 seed project has just about completed. Making the seedmakers go a little long to be more sure of full, ripe seeds. Already have a few seeds but not sure how long to wait before trying to sprout them. Anybody know?

More later ...
"For one more time
Let your madness run with mine"

OK - I almost killed em - enuff said there. The girls are flowering but I don't expect much from them, though they have another 5 or 6 weeks to go. Here's a gang shot. The two in front are Thai'Tanic and growing well. The pathetic rest of the gang are flowering. Probly end up with a few nice nuggets. 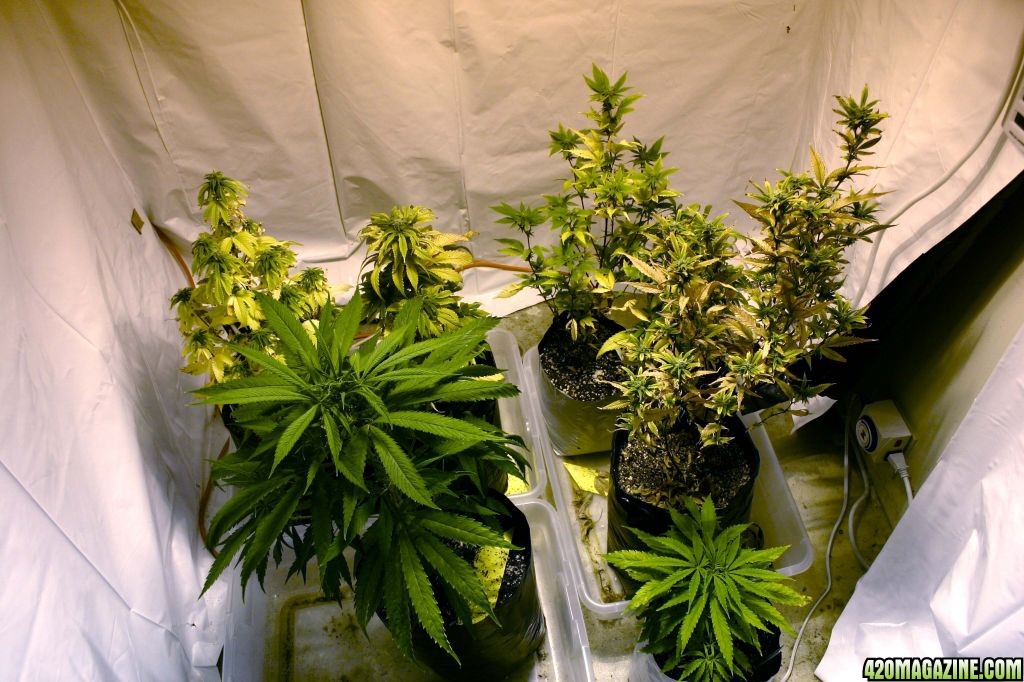 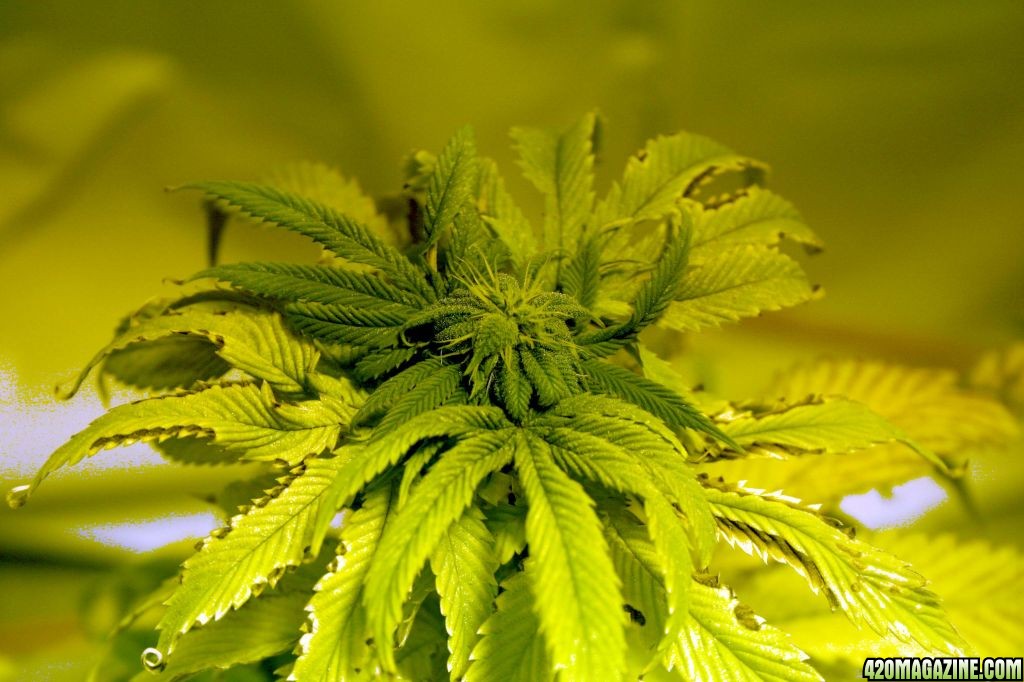 So now I have some clones started up. Heat mat and dome is a must if want them to make roots fairly quickly. Already made that mistake before too. 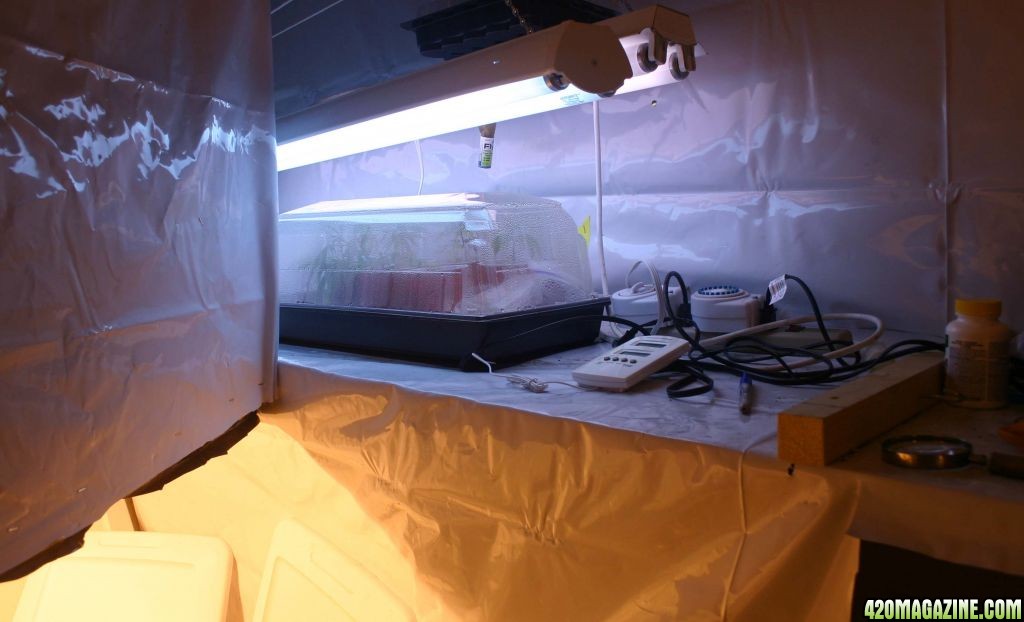 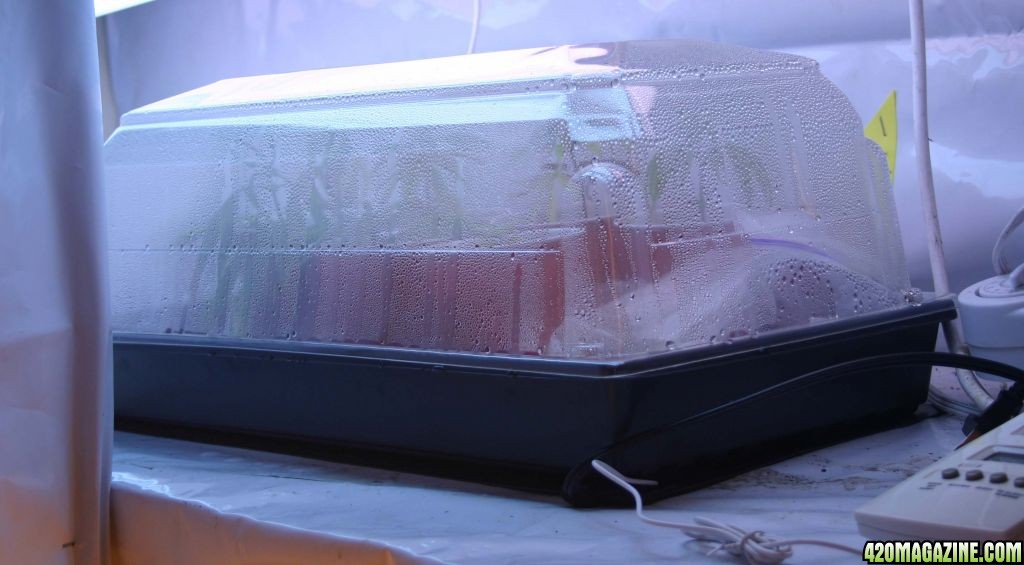 And I have a few I started from seed around 4 weeks ago. They're coming right along. They really like HappyFrog. Started 'em in it and in the 2-gallon bagz I added a bunch of Perlite - they seem to be happy. 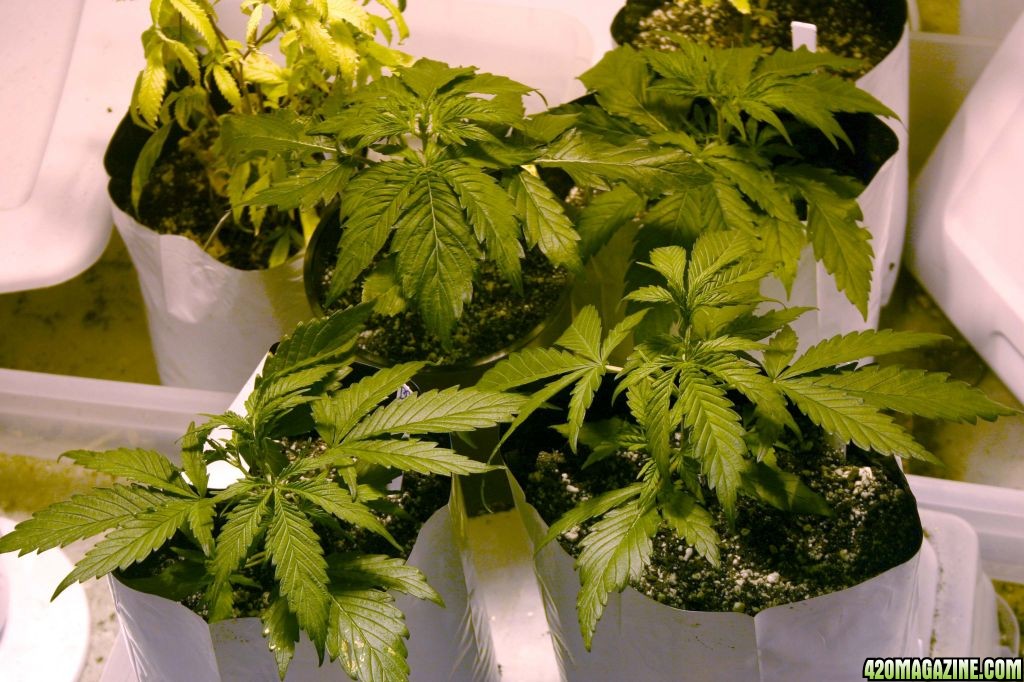 I'll post some more pics as things progress in a week or two.
"For one more time
Let your madness run with mine"