Eric Chipman doesn't hide his medical marijuana use, which he says best treats the lasting effects of a severe accident he was in 40 years ago.

So, during a two-week stay at Southern Maine Health Care in Sanford, Chipman told his doctors he was rubbing a marijuana-based lotion into his skin that relieves pain better than the narcotic drugs he tries to avoid. After making that disclosure, however, Chipman was told by hospital officials he was in violation of hospital policy and must remove it from the property.

The loss of his medicine slowed Chipman's recovery, he said, because of pain and inflexibility that makes it harder to do physical therapy sessions and gain back the strength he needs to care for himself and get in and out of his wheelchair.

"Medical marijuana could help so many people and they won't allow it," Chipman said. "I think of it as a Catch-22."

Chipman, like other patients around the state, ran afoul of a hospital policy that is common in Maine, despite a state law that allows qualified patients to use medical marijuana.

Because marijuana is illegal under federal law and hospitals are licensed by the federal government, they could risk being found in violation of their license, lose funding and face penalties. Also, because medical marijuana is not approved by the Food and Drug Administration, clinicians are prohibited from providing the drug in a hospital, officials said in April while testifying against a bill that would have allowed patients to use smokeless forms of medical marijuana — such as lotions applied to skin or liquid extracts called tinctures that are taken orally — in Maine hospitals.

The bill was supported by people who say patients need consistent access to their medicine, including children with epilepsy and other seizure disorders that are controlled only by medical marijuana tinctures. It was opposed by hospital officials who say they are prohibited by federal law from allowing the drug's use.

The bill was unanimously recommended for passage by the Legislature's Health and Human Services Committee, approved by the House and Senate, but vetoed by Gov. Paul LePage.

LePage wrote in his veto message that the bill "ignores that the state serves as the federal government's delegate to perform hospital inspections." He said the state statute cannot trump federal law and "it would be inappropriate to imply to the hospitals" that allowing marijuana use in their facilities could not have repercussions under federal law.

Sen. Eric Brakey, the bill's sponsor, said there was enough support in the House to override the veto, but the override effort fell short by one vote in the Senate.

"I think it was very unfortunate," Brakey said of the veto. "I"m not going to give up on this issue. It's really painful to see what (patients) are going through and how our state and federal government are standing in the way of them having access to the one drug that works for them. This problem is not going away."

Using Marijuana Instead Of Narcotics

Chipman, now 64, was seriously injured in a motorcycle accident in 1976 that left him with more than a dozen broken bones, including a broken hip and pelvis. In the years since, he's had four bone grafts, a hip replacement and multiple discs removed from his spine. He uses a wheelchair and, because of ongoing problems with his back, is unable to hold his head and neck in an upright position for long periods of time. Pain and stiffness from carpal tunnel often make his hands go numb, he says.

Chipman said he has been using medical marijuana since the 1970s. He moved to Sanford from New Hampshire last year because he could become a patient and access medical marijuana legally. He said he smokes marijuana every day and uses it in a topical form, rubbing the lotion into painful areas.

"It's just enough to take the edge off the pain and stay away from narcotics," said Chipman, who was a chef before becoming disabled by his accident.

He makes the lotion with emu oil, aloe and cannabis. Rubbing it onto his skin doesn't provide a high the way smoking or ingesting marijuana can, but it is the only thing that gives him relief from pain in his hands, he says.

"With (medical marijuana), I can tie a bow with a piece of yarn. These fingers will move in every direction," he said. "Without it, I have to use two hands to pick up a water bottle and can't tie my shoes."

Chipman arrived at the Sanford hospital two weeks ago with a blood infection. After he told health care workers that he was using his topical medicine, he was told he needed to remove it from the hospital or it would be confiscated.

The hospital's policy says it does not allow the administration or consumption of any medical marijuana, including in tinctures or solutions.

"Southern Maine Health Care's policy prohibits the administration of marijuana to any patient, by any means, while the patient is within our facilities and under our care. Our federal license does not allow for marijuana — classified by the Drug Enforcement Agency as a Schedule I controlled substance — to be on the premises," said Leslie Roberts, a spokesman for Southern Maine Health Care. "If we lose our license, we can't help patients."

Dr. Dustin Sulak of Interg8 Health in Falmouth, a practice that specializes in medical cannabis, said it is becoming increasingly common for his patients to use topical cannabis because it's non-psychoactive, meaning they won't feel the high they would if they were smoking marijuana. He said topical cannabis is especially effective for pain relief and as an anti-inflammatory, although doctors are still working to understand proper dosage.

Sulak said it is not uncommon for patients to have to stop using medical marijuana in hospitals, although some also will continue without telling their doctors. That practice is seen most often with pediatric epilepsy patients who use tinctures to control frequent seizures, he said.

"Even though the hospital policy will say no cannabis allowed, the doctors and nurses are turning their heads and allowing parents to administer it to their children," he said. "Cannabis should not be a Schedule I drug. I do think at some point hospitals need to make policies based on the health of their patients, not outdated federal policy."

Chipman is scheduled to leave the Sanford hospital on Monday, but he won't be able to return to his own apartment and care for himself. Instead, he will move in with his brother and the hospital has arranged for a health care worker to assist him at home. He said he is looking forward to using his medical marijuana — especially the topical form — so he can make better progress with his recovery.

Though he understands why Southern Maine Health Care's policy is in place, he said he will continue to advocate for change so people can continue to use alternative medicine if they feel that's what is best for them. "I also want people to understand they're going to come across this in hospitals," Chipman said. "They're going to have to fight." 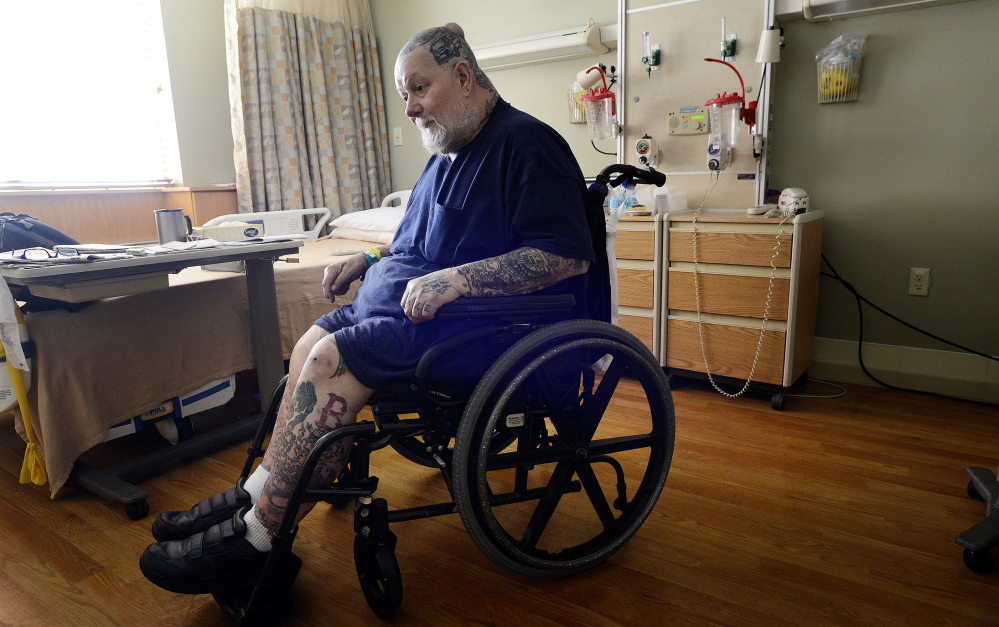