Recreational marijuana use will be legal in Maine this month after a referendum passed by voters in November cleared its last hurdle, a signature from Gov. Paul LePage (R).

The office of Maine's secretary of state said on Twitter Tuesday that they had received a signed proclamation for ballot initiative Question 1 from LePage dated Dec. 31, meaning the law is set to take effect Jan. 30.

In November, Maine voters passed the referendum to legalize marijuana for people ages 21 and older by a margin of 4,073 votes.

The "No on 1" campaign then requested a recount, which yielded a similar vote tally. The opposition group conceded Dec. 17.

Maine legalized medical marijuana in 1999. The new law allows adults to own and grow small amounts of marijuana.

Per the law, it will also eventually be legal to buy and sell marijuana, but lawmakers must first create a regulatory system. That's supposed to be complete in nine months, according to Maine Public, though there could be delays. Legislators may also introduce proposals to make changes to the law.

The law sets taxes for the new industry at 10 percent. It still prohibits public pot consumption, but does open the door for marijuana "social clubs." It also gives individual cities the right to impose their own restrictions on weed businesses.

LePage came out against Question 1 before the election, arguing that legalizing the drug "could lead to more deaths" and suggesting children and pets would be in danger from pot-laced snacks.

Even as he ushered in the new law, LePage appeared to cast doubt on its validity. According to WMTW News 8, the governor's signed proclamation notes that he "maintains strong concerns regarding the integrity of Maine's ballot and accuracy of Maine's election results and cannot attest to the accuracy of the tabulation certified by the Secretary of State."

A spokesman for LePage did not immediately return a request for comment.

Voters in California, Nevada and Massachusetts also approved marijuana reform measures in November, bringing the number of states that have legalized pot to eight. One American in five now lives in a state that has made recreational marijuana legal, according to The Washington Post.

The federal government still outlaws pot and classifies it as a Schedule 1 substance alongside drugs like heroin, though Department of Justice guidelines have discouraged prosecuting operations that adhere to state law.

President Barack Obama said ahead of the election that the growing number of states passing reforms should lead to "a more serious conversation about how we are treating marijuana and our drug laws generally." It's not clear whether President-elect Donald Trump's administration will continue a hands-off approach to enforcement in states that have legalized marijuana. 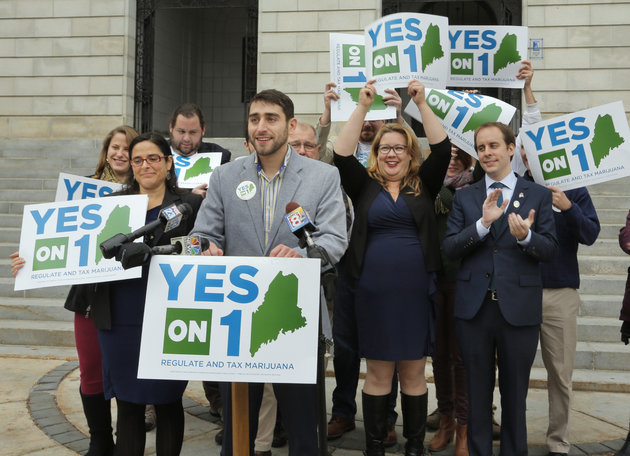 K
ME: Governor LePage Signs Off On Legal Marijuana