hello all... i'm going on the 4 week of flowering and my leaves starting to look like a manganese def.. 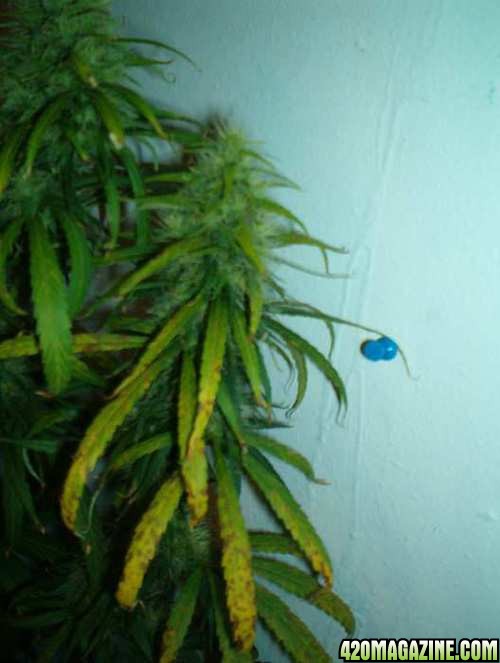 whats the proper way to handle this problem? should i do a flush?

I could be high, but it looks like lockout brought upon by overwatering. Flush it well then leave it alone for awhile, till good and dry then plain water. I am high though, so maybe we get opinions. Where is your plant?
Last edited: Feb 4, 2008
420 Magazine®
Creating Cannabis Awareness Since 1993

sorry boss this pic was from moose post, i was looking through his post and that pic seems to be the closet to my plants..

I would flush thoroughly with 1/4 strength flowering fert, and give some sea tea to roots and foliar. You need to be very careful that you do not over water your plants at this stage. Once you have flushed, go back to a wet/dry cycle. The sea tea will really help a stressed plant.
A tip - when using MG, be very careful adding extra ferts (additives) as you can very easliy make the medium 'hot'.

If it is rust which is and can be a major problem for a lot of growers here is a article written by a good friend and master grower.

rust, how many of you have had this and been beaten by it? lots i bet!!!
first, rust is a fungi. it is opportunist. it preys on unwell plants. if something is a miss, rust is a sign. rust has been identified to have 7,000 species. it attacks crops of every description. but we're only interested in one variety arn't we?
if rust is present early in a grow, you have problems as it's an indicator something in your room is a miss. usually ventilation. go through your system and double check things are in place and working properly.
rust is an air borne fungi. if given the opportunity, it WILL take hold. it usually does during flower as this is when the plants immune system is at its weakest as its energies are concentrating on re-production, not survival.
depending on what part of the grow you get it, you can cure/minimize it with either chemical or natural remedies.
the attached pic shows how it re-produces and shows itself. it enters the leaf via the stomata and then it's off and running.
fungacides used are generally copper based and include; thriram, manzecob, maneb or zineb at 10 day intervills.
organic;
baking soda, 1 tea spoon/ quart of water. spray on.
copper sulphate, read lables.
fungacidal soap sprays;
garlic sprays, 1/2 cup minced garlic, 1 quart of water. let sit 24hrs, strain, spray.
sulphur, one of the best natural sprays. it is low in toxicity.
micro kill, a citric based killer. i use this with great success.
420 Magazine-Grow Support

thanks for the great imfo

i did add a 10g bucket water to try bringing up the (humidty)sp do u think that could have started the fungus?

did a flush today and gave her 1/2 str nutes.. is MG soil concenrd organic? if so i have to go get some baking soda..

Miracle grow soil is only organic if it states so on the container. If your problem is rust it means you have a problem with something in the room that is causing stress to the plant which in turn allows the rust spores to take hold. It doesn't matter what the signs and symptoms are in a sick plant in soil indoors. The first treatment is to flush the soil really well, add back a 1/4 to 1/2 strength dose of nutrients and raise your lights some. You have to gve the plant some room to repair itself and bombarding it with nutes and lights doesn't allow this time. After you do that you can start to apply treatments to heal the plant.
420 Magazine-Grow Support

Can i do a flush at 6weeks