Marijuana legalization advocates might have another reason to rejoice if Florida voters approve a proposed constitutional amendment allowing pot for medical use. The initiative's passage also will pre-empt Florida's "bong ban," which forbids the sale of pipes used to smoke the plant, said the head of the drive behind the amendment. Ben Pollara, campaign manager of United for Care, pointed out that the amendment's definition of marijuana's "medical use" includes "related supplies."

Anything now outlawed as drug paraphernalia, including "metal, wooden, acrylic, glass, stone, plastic, or ceramic pipes," may be legally sold if used to smoke marijuana to treat a medical condition, Pollara told the Tribune/Scripps Capital Bureau. That could even include a "2-liter-type soda bottle," which state legislators have banned if used with a controlled substance. Jon Mills, the former University of Florida Levin College of Law dean who drafted the amendment's language, didn't take issue with Pollara's interpretation.

"Pragmatically, though, I expect the Legislature will go back and further define what is and what is not (illegal) paraphernalia," said Mills, who also served as speaker of the Florida House in 1987-88. "But certainly, if you were arrested for having drug paraphernalia and were using marijuana medically, you'd make the argument your device was included" in the amendment's definition, he added. Also in agreement is Sandy D'Alemberte, former Florida State University president and law school dean and past American Bar Association president.

"If devices that best administer medical marijuana are on the list" of drug paraphernalia, "then on the face of it, it sounds like you'd have a pretty good argument you weren't breaking the law," he said. "Ultimately, of course, a court would have to decide," added D'Alemberte, who also chaired the Florida Constitution Revision Commission in 1977-78. A look at state law suggests Florida lawmakers have schooled themselves on the ways people get high.

For instance, they didn't just ban "roach clips," they crafted a definition for them: "Objects used to hold burning material, such as a cannabis cigarette, that has become too small or too short to be held in the hand." They have added "miniature cocaine spoons" and "carburetor pipes" as banned items. Over the years, lawmakers even made "balloons" and "duct tape" illegal if used as drug paraphernalia.

Last year, the Legislature cracked down on bongs, the common name for pipes used to inhale marijuana smoke. State law previously allowed certain retailers to sell bongs if at least 75 percent of their sales came from tobacco products or they had no more than 25 percent of "certain drug paraphernalia" sales. A bill offered by state Rep. Darryl Rouson, a St. Petersburg Democrat, made the sale of all marijuana pipes a first-degree misdemeanor. Second and subsequent violations rise to a third-degree felony.

Rouson, who has been open about his past struggles with drug addiction, carved out an exception for what he called "grandpa's pipe" – anything made from "briar, meerschaum, clay, or corn cob." Gov. Rick Scott signed the bill (HB 49) into law and it took effect last July. Rouson said that the amendment, if passed, would further water down his measure. "If legitimate medical users choose to use a banned device as a delivery system, then, yes, the amendment allows it," he said. Even now, Pollara questions the law's effectiveness.

"Every little convenience store in my (Miami) neighborhood sells bongs," he said. Leo Calzadilla, owner of Purple Haze Tobacco and Accessories, said the bong ban "hasn't affected me at all." His website shows an array of pipes, in different colors and materials, for sale at his shops in St. Petersburg and Madeira Beach. The ban "hasn't changed the way I do business," Calzadilla said. The Florida Department of Law Enforcement reports that only 10 people were charged under the state's bong ban in the past year. The type of bong sold – or other paraphernalia, if any – wasn't specified in those arrests, FDLE spokeswoman Gretl Plessinger said. 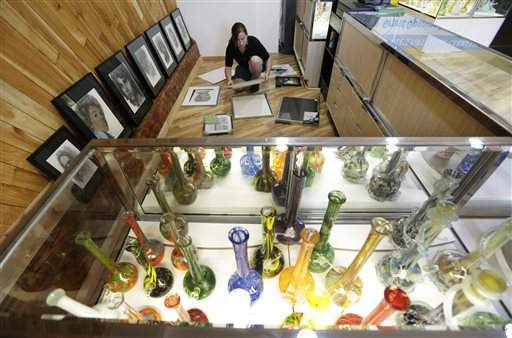 The Ban on Bongs in Florida is a joke! Polk County has a sheriff trying to hold this law to the letter.