Marijuana And The Military

Robins Air Force Base, Ga - As state recreational and medical marijuana laws change throughout the country, Air Force Reserve Command officials remind reservists that any marijuana use or possession by uniformed service members is still illegal under federal law. And the consequences for breaking this law could be career ending.

Air Force Reservists, like their active-duty counterparts, serve under Title 10 of the United States Code and are subject to the provisions of the Controlled Substance Act, which considers marijuana use or possession to be a crime, regardless of state laws.

"Even if a state has legalized medicinal marijuana, it is still illegal to use or possess it under the Controlled Substance Act, 21 U.S.C. 802, as it is a Schedule 1 drug," said Lt. Col. Michael Roderick of AFRC's staff judge advocate's office at Robins Air Force Base, Georgia. "According to the CSA, Schedule 1 drugs, substances or chemicals are defined as drugs with no currently accepted medical use and a high potential for abuse."

The Department of Defense's position on drug use within the services, as stated on the Military OneSource website, is clear: "Drug abuse and dependence are incompatible with readiness, the maintenance of high standards of performance and military discipline. As a result of this position, each of the services conducts a drug testing urinalysis program to deter and detect drug misuse among service members and to permit commanders to use the results to separate service members from the military."

"Marijuana continues to be the drug of choice for Air Force Reservists who test positive during routine urinalysis," said Dr. Don Jenrette, the command's Drug Demand Reduction Program manager. "In fact, for AFRC over the past 18 fiscal years, two-thirds of the positive drug test results are for THC, the active ingredient in marijuana."

Jenrette said all reservists know that marijuana use is illegal while they are in military status, but some may wrongly believe that the laws in their state make marijuana use acceptable when they are not on duty. Reservists who use marijuana while they are away from their military job can still test positive if selected for a drug urinalysis test during a unit training assembly.

Some reservists also believe that having a prescription for medical marijuana protects them if they should test positive.

"Whether or not they have a valid prescription, marijuana use is still illegal for military members," Jenrette said. "Most conditions that would require a prescription for marijuana would be disqualifying for a reservist anyway, but if a reservist is prescribed marijuana by his physician, he or she should refuse it and ask for an alternative."

Reservists should also be careful if their spouse or other family members use marijuana, even if they use it legally either recreationally or for medicinal purposes. There have been reported cases among other services where the spouse of a service member placed medically prescribed marijuana in their vehicle, only to have it discovered by security forces members on base.

"Even if marijuana possession and limited use has been legalized in your state, military installations are considered federal property," according to Military OneSource. "If you or a family member is found on an installation in possession of or using marijuana, you will be subject to the federal laws related to marijuana, not the state laws."
Military OneSource goes on to warn military members against accidental ingestion or exposure.

"If limited possession and use is legal in the state in which you live, the availability of the drug can lead to accidental exposure or ingestion that could cause trouble for your military career," according to the website. "You can minimize your risk by being aware of your surroundings, being cautious about eating foods in homes where marijuana is present and knowing whether establishments in the community allow recreational use. By remaining vigilant and avoiding establishments permitting recreational use of marijuana, service members can help to ensure they do not jeopardize their careers." 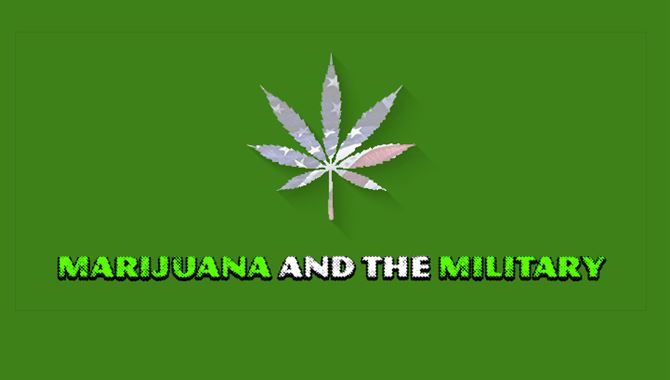