Currently, the District has the toughest penalties for marijuana use in the Washington region.

First-time offenders caught possessing any amount of the drug can face up to six months in prison and a $1,000 fine. In Virginia, a first time offender arrested for possessing up to a half ounce of marijuana can be sentenced to up to 30 days in jail and a $500 fine.

The Maryland General Assembly approved a bill this spring that dropped that state's penalty for possessing small amounts of marijuana down to up to three months in jail and a $1,000 fine, the Washington Times reported.

Fearing New York's marijuana laws were resulting in too many young adults catching a criminal record, Cuomo (D) is asking the New York legislature to make open possession of up to 25 grams of the drug a violation punishable by only a $100 fine. New York Mayor Michael Bloomberg has endorsed the plan, which could be voted on in a few weeks

In response to a question Tuesday morning about the District's laws, Gray said he is focused on launching the city's medical marijuana program. Approved by the council in 2010, the program allows for city-sanctioned marijuana dispensaries to grow and distribute the drug to patients with doctors' prescriptions. But the program has struggled to get off the ground amid community opposition.

As for District laws for recreational users, Gray said the matter hasn't come up for serious discussion within the administration.

"But I do think there will be continued discussions, about how marijuana will be treated across the District and the nation," Gray said.

Yet, Council member Phil Mendelson (D-At large), chairman of the Public Safety and Judiciary Committee, said the District can't consider weakening penalties for marijuana possession because it could conflict with federal law.

Because the U.S. Attorney's Office prosecutes most crimes in the District, Mendelson said "its very difficult to make radical changes to drug laws."

"The U.S. Attorney is going to expect the same drug polices as the federal government, which are very harsh on drugs," Mendelson said. "Any bill that goes through here, the U.S. Attorney is a player in the legislative process. I would suppose they would oppose any weakening."

Still, the D.C. Council sets local law in the District. When asked why the council follows the lead of a federal prosecutor, Mendelson suggested the U.S. Attorney Ronald C. Machen currently has enough clout within the body to sway the outcome of the issue.

"We weren't able to get medical marijuana out without assessing, engaging" the U.S. Attorney, said Mendelson, adding he doesn't necessarily agree that current penalties are appropriate. 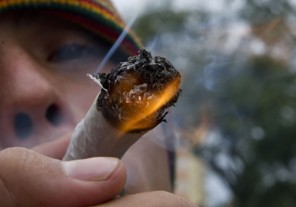