It's no surprise that the commenters at yesterday's Marijuana Enforcement Division (MED) public hearing for proposed rule changes to marijuana legislation brought up an array of associated social issues. And yes, they included representatives from Smart Colorado, including attorney Rachel O'Bryan, who noted that although increased regulation of marijuana edibles available for retail sale is a step in the right direction, the anti-pot organization's position is that cannabis is dangerous because the effects are "impossible to predict or control."

A proposed rule would limit retail edibles to 10 milligrams of active THC per serving and no more than 100 milligrams total in each edible product unit. Serving sizes would be clearly demarcated (a Hershey's candy bar was brought up as an example), and any test batches with units including more than 100 milligrams of active THC would fail the testing process. O'Bryan's testimony, however, argued that the 10 milligram dose of active THC should be applied to a standard food serving size and that the 100 milligram total-unit limitation doesn't do enough to protect children from accidentally ingesting large doses of marijuana via candy. Other experts retorted that there is no lethal dose of marijuana -- and through the additional packaging requirements, they believe consumers will have the tools they need to self-dose.

As for consumer Greg Duran, he testified about what he sees as an environmental problem with the proposed packaging changes for marijuana edible. He compared the unnecessary waste that would result from single-serving unit sizes, as mentioned by O'Bryan, to packaging a bottle of Malibu in 64 individual servings, saying he believes the state is creating packaging requirements to solve a problem when the underlying issue is educating children and ensuring that no child has access to marijuana edibles.

"This whole thing about candy and sweets just appealing to kids is ridiculous," he added, stating that he enjoys candy and chocolate as an adult. And he wasn't the only commenter to be offended by the insinuation that edibles manufacturers are targeting children; more than one parent working in the marijuana industry noted that they didn't want their kids abusing drugs and had informed conversations with them about marijuana consumption. Amid debate about whether to require dosing information to be placed on each individual 10-milligram-THC serving size, Duran mentioned the lack of sustainability due to the extraneous (but necessary) packaging that such requirements would necessitate, comparing the concept to packaging a bottle of Midori into 64 individual serving sizes.

Surprisingly, a reference to Atlas Shrugged didn't come up during this portion of the meeting. That had taken place earlier in the session, when the MED agenda circled around to a proposed rule involving the maximum number of plants allowed in an indoor retail cultivation facility versus an outdoor cultivation facility or greenhouse. The difference in plant counts (3,600 for indoor versus 1,800 versus outdoor) was a hot topic among commenters, as was the grouping of greenhouses with outdoor facilities and the need to impose plant caps according to facility at all. Some of the problems cited with these plant restrictions included the variance inherent in using a plant as a unit of measurement, the amount of yield typical for an indoor versus an outdoor marijuana plant, and the sustainability implications of allowing more plants in indoor cultivation facilities than outdoor.

Mike Elliott, executive director of the Marijuana Industry Group, noted that the metric used for production caps aimed toward adjusting the supply flow of marijuana is inherently flawed, as plants vary in their yield, and suggested that measuring product by the pound might make more sense. However, he claimed that the 1,800 versus 3,600 metric seemed like a fair compromise for the moment. Other commenters noted that the electricity needed to power an indoor grow facility is replaced by the sun in an outdoor facility or greenhouse, arguing that the increased sustainability of outdoor facilities and greenhouse grows should be taken into account when considering production caps. The state will continue accepting written comments to the proposed rule changes through September 8. You can read the proposed changes here. 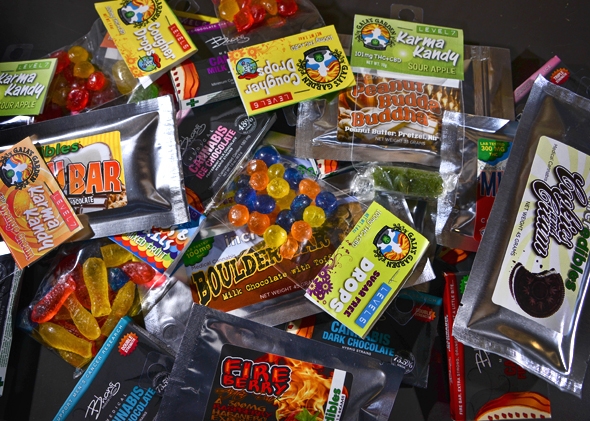 Pot Brownies Could Lose Some Punch Under Proposed California Rules