Here's a new twist to the food truck fad: A converted school bus featuring marijuana-infused sandwiches and other treats is set to open for business in Washington state this weekend. The Samich bus is the latest example of businesses that are sprouting to cash in on the growing pot industry. It is a promotion for Seattle-based Magical Butter, a company that sells a kitchen appliance that creates cannabis-infused cooking oils, herbs and spices at home.

Garyn Angel, Magical Butter's chief executive and food truck operator, said his truck is serving medical marijuana and thus falls into a gray area when it comes to the state's weed regulation. He said the dishes contain up to 100 milligrams of THC, a relatively high amount. Colorado considers 10 milligrams of THC a substantial single dose. Licenses for the first 20 recreational-marijuana retail stores in Washington are to be issued July 7. The state's Liquor Control Board has not confirmed whether it will license food trucks and restaurants, but has made it clear that no food requiring heat or refrigeration will be allowed in recreational marijuana stores.

Customers should expect to fork over more money if they dine at the Samich food truck. "This will be a high-end meal either way, but our infused entrees will cost around $10 more than a typical entree," Angel told the Cannabist. "If you go to a restaurant where something would normally cost $15, you could expect to pay $25 at our place." After debuting in Denver on the unofficial weed holiday 4/20, the Samich food truck is to roll into the MMJ Universe Farmers Market in Black Diamond, Wash., this Saturday and Sunday. Magical Butter will also be selling its MB2 machine, which retails for about $170. And in case you were wondering, Samich stands for Savory Accessible Marijuana Infused Culinary Happiness. 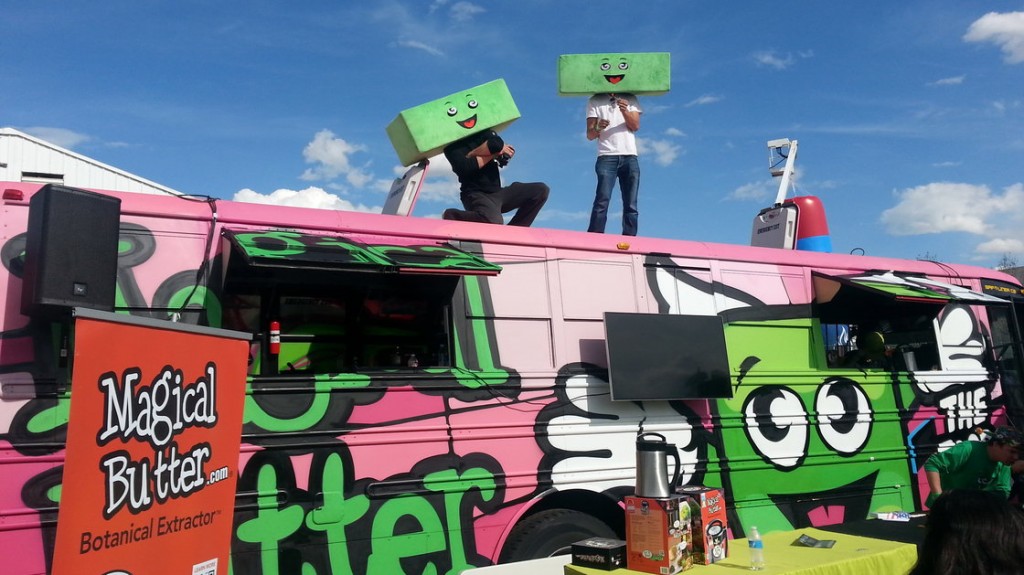 this looks like a lot of fun and the best reason for using public transportation that i can think of.

May 14, 2014
BuddyBuzzKill
B
T
The Latest Food Truck Theme Is Marijuana For Lunch