Marijuana For Sale On Tuesday: High Noon In Seattle, 8 A.M. In Bellingham

Washington State - The first two-gram package of legal marijuana will be sold in Seattle at noon on Tuesday, says James Lathrop, owner of Cannabis City, which is expected to be the first state-licensed store to open in Seattle. Call it High Noon in Seattle. Go to Bellingham and you'll have a shot at buying a joint, blunt and a gram or three at 8 a.m., said Tom Beckley, owner of Top Shelf Cannabis, also expected to be among the first weed shops to open Tuesday. Call it, the early bird gets the bud. Who will buy the first package of voter-approved marijuana in Seattle? Whoever is first in line, Lathrop said. So, if that's going to be you, you'll need to show up a little early. In Bellingham, said Top Shelf investor John Evich, they're still working on getting a life-long marijuana advocate, possibly a celebrity, to be the first to buy from Top Shelf.

Nuts and bolts
True to its "screw-it-let's-do-it" beginnings, Top Shelf creators were still scrambling to dial in all the physical details of getting their shop ready for sales. The bathroom was getting some cement work done and the display cases needed some work and a little dusting, but the register terminals and staff that will be working them were set.

One thing Top Shelf had fully nailed down was supply. Beckley and Evich have commitments from growers Nine Point Growth Industries and Sea of Green Farms for 18 pounds that could include blunts and joints (technicalities ...) and dozens of strains. They're shooting for $12 grams for as long as they last and other product that could hit the $25-per-gram gram range. "We'll always try to have some at that ($12 rate)," said Beckley. He hopes the word will get out that "Dudes at Top Shelf Cannabis are selling at 12 bucks a gram!" And, that they'll leave the black market and turn to supply from an I-502 shop.

Sales at Cannabis City will be cash only (though the Cannabis City crew can run your debit card like an ATM). No personal checks. It'll cost between $15 and $20 per gram, and while Lathrop and his crew haven't yet set a limit on how much you can buy, they want to make sure as many people as possible can make this historic purchase. Likewise, it's cash only at Top Shelf (minus the ATM ... though there's an ATM next door) and no purchase limit set yet, though they will judge that by the number of folks who turn up.

The big day
For the big event, Lathrop in Seattle has a security crew ready to check IDs and maintain a line of buyers that could run into the thousands. Magical Butter will have a food truck with water and popcorn available, and there will be portable toilets, too, Lathrop said Wednesday. Before the first sales, the marijuana retailer will have a ribbon-cutting. Which kind of ribbon is best for such an event? Why, a yellow police tape – "CRIME SCENE DO NOT PASS" sort of thing – of course.

While costs per gram of legal weed could run more than $25 in the first few months of sales, Lathrop says he's not going to take advantage of his position as the (likely) first store in Seattle. Why not gouge the eager beavers? "I'm not that kind of person and that's not the kind of business I want to run," he said while showing us around his store.

Same feeling over at Top Shelf, where there will also be food and beverages available for folks in line. Will there be a line? Well, Beckley says they feel it coming to their shop in the middle of an industrial park surrounded by road construction outfits. "We've had people in Germany call, asking if we had underwear or T-shirts for sale" with their logo on it, Beckley said. Top Shelf can't sell such things from their marijuana business, but they can from a separate entity. And in Seattle, where they expect a big lineup on a dense commercial strip in the industrial heart, they're also thinking etiquette and safety.

Amber McGowan, manager of Lathrop's store, says you should not light up outside the store once you get your legal weed. In fact, she said, it would be great if you went on home and enjoyed yourself in a legal way. Showing and smoking marijuana in public is against the law (state and city). And, of course, smoking up and driving off will put you at risk of a DUI.

What will you need in order to buy?
Bring your ID, cash and desire to stand in line ... and that's about it. Once you're in the store, no other personal information will be taken or required (though if the cashier thinks you just might be too young, they could card you again), McGowan said. "We want to make sure everyone has a good time and the outside event is not uncomfortable," Lathrop said. Once you're inside, he added, he doesn't want anyone feeling rushed.

Nevertheless, there will be just three strains of cannabis to buy, so no one will have too much trouble deciding. All three are Indica-dominant strains: Opal O.G. Kush, O.G. Pearl and Copper Kush. Remember, Indica strains tend to be less mental and more body, so get ready to hang out on the couch. 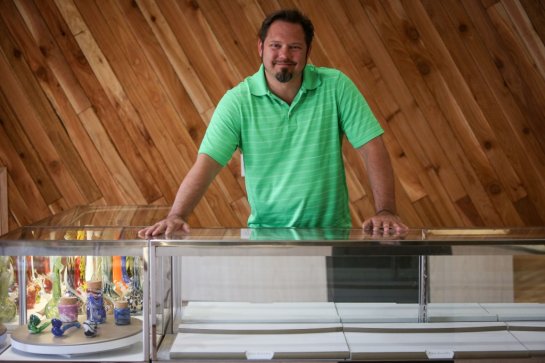