The findings were published in the April 2009 issue of The Journal of Clinical Investigation. The study showed, conclusively, that THC (the active alkaloid in Cannabis) caused brain cancer cells to undergo a process called autophagy. This process causes cells to feed upon themselves, thereby destroying them, and not only did researchers witness this process, the specific route by which the autophagy process unfolds was isolated as well.

The study was conducted in by Guillermo Velasco at the Complutense University in Spain. Although this study involved injecting mice with live human brain cancer tumors, the study also involved two human patients who both had highly aggressive forms of brain cancer. When both the mice and the humans received THC, the tumors shrank in size. 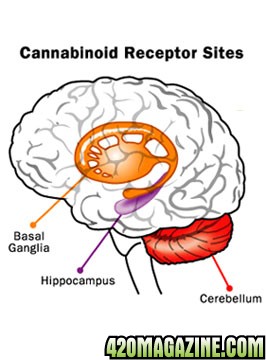 Both human patients had already been involved with a clinical trial that was testing THC as a potential treatment for cancer. In that study, researchers analyzed cancerous brain tissue taken before and after a 30-day THC treatment program. That simple study also conclusively showed that THC not only killed the cancerous cells, they left the healthy ones intact.

Velasco, highly encouraged by these results said; "These results may help to design new cancer therapies based on the use of medicines containing the active principle of marijuana and/or in the activation of autophagy."

Echoes throughout the medical field are already being sounded. Dr. John S. Yu, co-director of the Comprehensive Brain Tumor Program at Cedars-Sinai Medical Center in Los Angeles said, "The findings were not surprising. There have been previous reports to this effect as well. So this is yet another indication that THC has an anti-cancer effect, which means it's certainly worth further study."

Dr. Yu is quick to point out that cancer patients shouldn’t get too excited. He says, “People should not start smoking pot right away as a means of curing their own cancer." He further doesn’t want people to get the impression that Marijuana is a potential cure for cancer just yet, and reminds us that the cancerous cells that were destroyed were brain cancer cells specifically.

But what amazing news for those with brain cancer, and after doing a little digging for statistics, it turns out that over 40 percent of brain tumor patients are already seeking or using alternative treatments, which often include marijuana and natural herbal supplements as well. People who are dying slowly of cancer don’t let the irrational Federal Laws override their personal right to fight their cancer and to get healthy, especially in states where medical marijuana is already legal and saving countless lives.

Dr. Paul Graham Fisher at Stanford University warns, though; "That actually points out a cautionary tale here, which is that many brain cancer patients are already rolling a joint to treat themselves, but we're not really seeing brain tumors suddenly going away as a result.”

Any hope is better than no hope, and this new study has helped to further possibility in relation to THC and continued cancer research.