A recently published poll from The Denver Post has good news for pot legalization advocates. According to the survey, a majority of Colorado voters are in favor of Amendment 64, a November ballot measure that seeks to legalize and regulate marijuana like alcohol for adult use.

Of the 615 likely Colorado voters surveyed by The Denver Post, 51 percent are in favor of the measure, while only 40 percent are opposed.

That percentage was the exact same that PPP had found one month prior during a similar survey.

According to a report by the Colorado Center on Law & Policy, the passage of Amendment 64 could be a boon for the state economy. Marijuana legalization would produce hundreds of new jobs, raise millions for the construction of Colorado public schools and raise around $60 million annually in combined savings and revenue for Colorado's budget, the report says.

It's not just pot advocates that are in favor of legalization. The NAACP recently backed pot legalization measures in Oregon and Colorado not because the group necessarily favors marijuana use, but because members say current marijuana laws lead to a disproportionately high number of people of color being incarcerated or otherwise negatively affected.

"Marijuana prohibition policy does more harm to our communities than good," said Rosemary Harris Lytle in a statement, president of the NAACP-Colorado-Montana-Wyoming State Conference. "That is why we have endorsed Amendment 64 which presents a more effective and socially responsible approach to how Colorado addresses the adult use of marijuana."

The NAACP provided this data in a press statement about marijuana arrests in Colorado:

African-Americans made up roughly 4% of the population in Colorado in 2010, but they accounted for about 9% of marijuana possession arrests and 22% of arrests for marijuana sales and cultivation. The numbers in Denver are particularly staggering. According to a report prepared by the Denver Police Department for the the city's Marijuana Policy Review Panel, African-Americans accounted for more than 31.5% percent of arrests for private adult marijuana possession, despite making up less than 11% of the city's population.
Politically, the measure has received support from both Democrats and Republicans in Colorado, as well as more than 100 professors from around the nation. However, just last week Gov. John Hickenlooper came out in opposition to Amendment 64, saying in a statement:

Colorado is known for many great things —- marijuana should not be one of them. Amendment 64 has the potential to increase the number of children using drugs and would detract from efforts to make Colorado the healthiest state in the nation. It sends the wrong message to kids that drugs are OK.
To which Mason Tvert, co-director of the Campaign to Regulate Marijuana Like Alcohol -- the organization behind Amendment 64 -- responded with strong words for the Governor. "Governor Hickenlooper's statement today ranks as one of the most hypocritical statements in the history of politics," Tvert said. "After building a personal fortune by selling alcohol to Coloradans, he is now basing his opposition to this measure on concerns about the health of his citizens and the message being sent to children. We certainly hope he is aware that alcohol actually kills people. Marijuana use does not. The public health costs of alcohol use overall are approximately eight times greater per person than those associated with marijuana. And alcohol use is associated with violent crime. Marijuana use is not."

Hickenlooper's statement that Amendment 64 has the "potential to increase the number of children using drugs" is debatable at best. A recent study from the Center for Disease Control and Prevention shows that marijuana use among Colorado minors is going down, while it is simultaneously going up nationally. The drop in usage by Colorado teens as seen in the CDC data -- a drop below the national average -- coincides with the same period that the medical marijuana industry developed in the state, between 2009 and 2011.

Marijuana legalization advocates point to the data as sign that regulation is helping reduce marijuana use amongst minors. Mason Tvert, co-director of the Campaign to Regulate Marijuana Like Alcohol, told The Huffington Post "that even the partial regulation of marijuana can make it harder for young people to get their hands on marijuana. By regulating all marijuana sales, we can further reduce teen access and use."

And a 2011 study from economists at University of Colorado Denver and Montana State University may back that claim up. "Medical Marijuana Laws, Traffic Fatalities, and Alcohol Consumption" by Daniel I. Rees, from UCD, and D. Mark Anderson, from MSU looked at state level data from the more than a dozen states that had passed medical marijuana laws at the time of the study. Rees and Anderson found that there was no evidence of an increase in marijuana usage among minors in the states surveyed.

Amendment 64 will appear on Colorado's ballot in November, but the state voting guide -- the so-called "blue book" -- will not include the three main arguments in favor of legalization after the Colorado Legislative Council deleted the text, in apparent confusion, and would not restore the text to the voter guide. The three deleted arguments "For" are as follows:

Marijuana is objectively less harmful than alcohol.
The consequences of a marijuana offense are too severe.
Law enforcement resources would be better spent on more serious crimes.

The campaign says that the "Arguments For" Amendment 64 section of of the blue book is now just 208 words following the deletion, whereas the "Arguments Against" section is approximately 366 words -- meaning "Against" has nearly 75 percent more words than the "For" section. "The blue book is supposed to be fair and balanced, and it's safe to say this is quite lopsided and, thus, unfair," the campaign said in a statement. 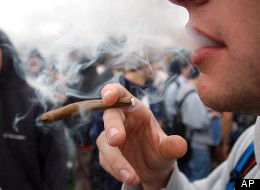