Marijuana Legalization In Massachusetts - Getting Over The Hump

No matter how you slice it, there's a stark statistical reality regarding marijuana reform in Massachusetts over the past decade: it's undefeated at the ballot box. This includes binding state-wide initiatives that were passed by voters (decriminalization in 2008, medical marijuana in 2012), and a large number of non-binding public policy question (PPQs) that were also run in state House and Senate districts since 2000.

In Massachusetts, PPQs give advocates the opportunity to test ballot language prior to high-stakes elections, something like a music demo preceding a full full-length production. Since 2000, legalizers have won every medical, decrim, and legal PPQ they've placed before voters. The most recent round found that in many rep and senate districts, more than 70 percent of voters support the age-restricted sale of marijuana. The pot-shaming media is loath to mention those experimental questions, but the results are striking - no losses, 60-plus wins, with cannabis reform passing again and again across the Commonwealth.

More specifically, the majority of those measures passed with significant two-to-one margins of victory. So it's not surprising that advocates have been expecting this November's binding statewide legalization initiative - formally known as Question 4 - to pass with ease in November. Considering the Teflon track record of pot reform at the polls, it seemed the logical conclusion. Then again, there's not a lot of logic in play in this increasingly heated election season. And so in the first half of September, the Campaign to Regulate Marijuana Like Alcohol (CRMLA), which just months ago seemed like a sure thing, is suddenly on shaky ground. Or so it seems.

The two most recent polls, both of which made gleeful headlines in the prohibitionist local commercial press, suggest that Question 4 opponents and proponents are locked in a dead heat, with the latter possibly headed for defeat, as the indication is that the initiative is losing steam. Looking for signs elsewhere, recent odds from online wager sites offer a bit more hope for marijuana advocates, with Predictit and Predictwise indicating a 59 to 58 percent likelihood of reform passing here, as of this writing, with a recent bump after initial campaign finance contributions have been reported.

Nevertheless, those sites also have the Bay State ballot initiative with the lowest chance among the crop of legalization initiatives including those in California, Nevada, and Maine - all of which are expected to win big, with an 80 percent-plus likelihood of passing. Online markets or prediction sites such as these are important to note as perception is typically the current reality. Markets aren't always correct but they do reflect the street value of the proposition. And six weeks out, it's important data to reflect on. Betting money is still solidly on it passing.

How Did We Get Here?

The easiest culprit to peg is the local media, which works hand-in-rhetorical-hand with the political leaders who oppose Question 4, namely those affiliated with the Campaign for a Safe & Healthy Massachusetts. Pols and their surrogates are often given a platform to spit propaganda, unchecked, with the most glaring example being a now-infamous Boston Globe op-ed from March penned by Boston Mayor Marty Walsh, state Attorney General Maura Healey, and Governor Charlie Baker. The free publicity helped them kick off their campaign from the top of the New England media ecosystem, their outright lies and half-truths subsequently trickling down through smaller outlets.

The Globe's only mainstream competitor, the Boston Herald, has proven even worse, with Onion-worthy editorials railing against all things related to marijuana. The tabloid's op-eds range from ignorant to sad pathetic puns and quibbles, with the conservative barkers even sucking up to Democrats who they otherwise deplore for leaning right on weed. Meanwhile, north of Boston, the Lowell Sun, another propaganda organ, runs stories such as, "Tewksbury couple opposes legalizing recreational pot in light of son's heroin OD." (A headline you probably won't see: "No longer on opiates, using marijuana instead.") Most coverage on the local TV news is just as bad, often echoing the influential dailies. No wonder "No on 4" spokespeople won't return my calls. They get a free pass from everyone else.

How did we get to this point in what should be a blow-out? Dan Delaney, represents the Boston dispensary Patriot Care and is campaigning against Question 4. Delaney thinks the odds are 50-50, and suggests the "Yes on 4" campaign came off sounding harsh in its responses to opponents, particularly when a tax and regulate representative said that parents with addiction horror stories had been used as campaign props.

Delaney also wonders if a rift is bubbling between medical patients and legalization advocates. As Question 4 would expand access for patients, that idea should be a non-starter, but yet Delaney may have a point: statements by the Campaign to Regulate Marijuana Like Alcohol that the state's medical marijuana program is "barely functional" should be tempered as to not risk losing the support of the advocates, like those with the Massachusetts Patient Advocacy Alliance, who are fighting for medical implementation.

Still, the immediate fate of legal pot in Mass may boil down to money. The pro-initiative campaign has had a difficult time soliciting local donations, while the Washington, D.C.-based Marijuana Policy Project (MPP), which is behind the initiative, has appeared to have similar troubles. At the New England Cannabis Convention, held last April in Boston, MPP Executive Director Rob Kampia asked members of the marijuana industry to step up with donations, which apparently hasn't happened.

The following month, Kampia emailed supporters, "Our Boston fundraising effort on April 21 was the worst ever ... After weeks of planning and sending hundreds of invitations for the meeting, we received an anemic 15 RSVPs - and ultimately only one person showed up ... What's worrisome isn't this one bad event, but that it mirrors the contributions and involvement across Massachusetts since the initiative launch."

In the somewhat recent past, MPP had stacks of money, but more recently their early billionaire supporters like Progressive Insurance magnate Peter Lewis have passed, while others have moved onto funding other social justice issues. Combine that with a sense of local contributor apathy and perhaps entitlement, plus the popular perception that MPP is infinitely funded, and it was easy to predict a slam dunk. Look closely, however, and there may be even more reasons for concern. The more local grassroots group, MassCann/NORML, endorsed Question 4, but its core members are more committed to complete legalization (with no taxes or oversight) than they appear to be with funding MPP's measure.

On August 23, MPP sent out another email, this time cancelling a fundraising opportunity with former Mass Congressman Barney Frank. "Due to extremely low ticket sales for our fundraising reception in Boston on August 28," the note read, "we have decided to cancel the event." From a national perspective, MPP is also running more state initiatives than ever before, leaving its resources spread relatively thin.

It's not all bad news for reformers. Early financials from the CRMLA and its Safe & Healthy opposition show a healthy lead for legalizers, with their group collecting $2,767,703.32 in receipts through the last reporting date - much of which was spent on local radio and TV spots that will run in the week before the election. More than $2 million of that came from DC-based New Approach PAC.

The Safe & Healthy front, meanwhile, only reported $363,202 in receipts, $25,000 of which came from the Beer Distributors PAC. Upon said reports being released, the Safe & Healthy campaign tweeted, "96% of Yes on 4's contributions came from out of state interests." Which appears to be what Kampia was worried about. In Massachusetts, out-of-state money is sure to be another talking point for Boston media people and politicians who oppose pot.

In November, the real test for regulated marijuana in Mass will be voter turnout. If a mob of people hit the polls, you can expect Question 4 to pass. Even the anti-legalization lobbyist Delaney, with whom I have spiritedly feuded in the past, doesn't disagree with that notion, but wonders if a Trump and Clinton matchup will draw high numbers in this bluest state. I think he underestimates the number of Massachusetts voters who don't need a presidential contest to show up, and who have indicated more than 60 times that they want legal cannabis. 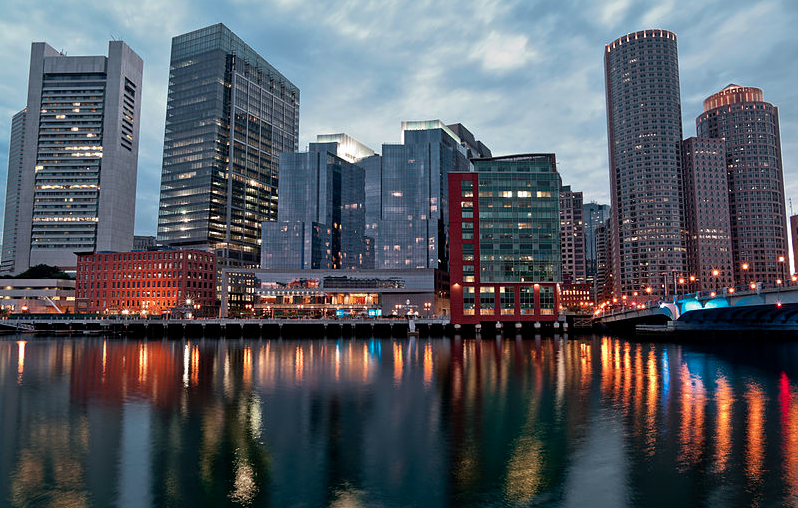 K
The Hidden Political Conflicts In The Marijuana Legalization Debate

Sep 6, 2016
Katelyn Baker
K
K
Why Marijuana Legalization In Liberal Massachusetts Might Be A Tough Sell

Sep 12, 2016
Katelyn Baker
K
K
Will Massachusetts Be The Next State To Legalize Marijuana?