A clear majority of Americans say that marijuana should be made legal if it will be taxed and regulated like alcohol, even though few say they use marijuana themselves, according to a new HuffPost/YouGov poll.

According to the new survey, 51 percent of Americans say that marijuana should be "legalized, taxed, and regulated like alcohol." A much smaller percentage (6 percent) say that the drug should be legalized, but not taxed and regulated. Only 33 percent of respondents said marijuana should not be legalized at all, and 10 percent said they weren't sure.

The percentage of Americans in the new survey saying that they want to legalize marijuana is somewhat higher than on most other polls, perhaps because the question specified that marijuana could be legalized and "taxed and regulated like alcohol," while most other surveys ask if marijuana should be legal or illegal without qualifiers. But a recent Pew Research Center survey also found that a majority of Americans support legal marijuana.

In the new Huffpost/YouGov poll, a combined 70 percent of Democrats and 59 percent of independents, but only 37 percent of Republicans, said that they thought marijuana should be legalized either with or without taxes and regulations.

Even among respondents who said that they never use marijuana, a combined 54 percent said marijuana should be legal either with taxes and regulations (48 percent), or without (6 percent).

Among those who currently never smoke marijuana, no respondents said that they plan to smoke it to celebrate April 20 -- but 1 percent said that they may.

The poll was conducted April 16 and April 17 among 1,000 adults using a sample selected from YouGov's opt-in online panel to match the demographics and other characteristics of the adult U.S. population. Factors considered include age, race, gender, education, employment, income, marital status, number of children, voter registration, time and location of Internet access, interest in politics, religion and church attendance. 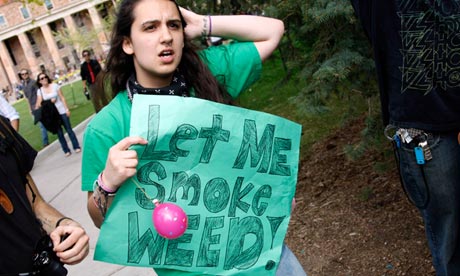