Marijuana Reform Is Still A Long Way Off For Texas

Marijuana reform is headed for Texas, but it probably won't get here anytime soon.

During the 85th Texas legislative session, which ended in May, two cannabis reform bills made it further than pretty much any similar efforts have before. Although both laws had an apparent majority in the Texas House of Representatives, the session ended before they could be voted on.

One bill aimed to decriminalize possession of small amounts of marijuana. The other tried to create a real medical marijuana program. While the bills' legislative journey says a lot about how much politicians in Texas have warmed to marijuana, it will probably be at least two or three more years before the state sees any big changes to its pot laws.

Marijuana activists — still reeling from a bitter defeat in May – are now looking ahead to the 2018 midterm elections, as well as the start of a new legislative session in 2019, as the first realistic points when they can try for decriminalization and medical marijuana reform again. The Houston branch of the National Organization for the Reform of Marijuana Laws (NORML) is writing a new version of House Bill 2107, the failed medical bill, in the hopes of getting a local representative to sponsor it in 2019, according to spokeswoman Samantha Oser.

To secure any real changes to the state's cannabis laws, Oser argued Texas will first need to "elect representatives that are more progressive, and not just for cannabis reform" during the 2018 midterm elections. Part of that meant getting money out of politics. Oser recently wrote an article outlining the donations sent from alcohol, health care and pharmaceutical companies to Senator Charles Schwertner and Representative Four Price – two high-ranking state Republicans who Oser felt had helped kill the marijuana reform laws.

Despite those big goals, Oser was optimistic. "As far as next session goes, we feel pretty confident that we will be able to get something done," she said. "Especially now that the donors have been exposed."

Heather Fazio, spokeswoman for the Texas branch of the Marijuana Policy Project (MPP), plans to attend a special session of the Texas Legislature in July. No marijuana bills are scheduled for the session. But if there's any way MPP can squeeze a marijuana reform amendment into a separate piece of legislation, Fazio says she doesn't want to miss that chance.

Fazio said there was "no question" that pharmaceutical companies are hostile to marijuana reform efforts. But reflecting on the recent defeat of the two marijuana reform laws, she simply saw politics as usual. "When you live in a corporatist society, that's how things happen," she said. She pointed out that Representative Todd Hunter, chairman of the Calendars Committee, where the decriminalization died, had sent some troubling messages about his approach toward legislating.

Hunter ultimately voted to let the decriminalization bill out of committee, albeit not in time for a full floor vote. But he also gave a short monologue from the House floor in which, speaking of himself in the third person, he urged other politicians, "Let...Mr. Hunter take the heat."

Hunter explained he could use his powers as a committee chairman to kill laws – he didn't specify any particular ones – allowing his colleagues to feign disappointment when a bill they ostensibly supported died. "His speech was a little disturbing," Fazio said.

Fazio says she doesn't see marijuana reform as a Democrat versus Republican issue. She thinks the core messages of pot reform – more personal liberty, less government intrusion – can resonate with conservative voters in Texas and elsewhere. This July, for the first time, the Marijuana Policy Project is helping to set up a booth on cannabis at a conference of the American Legislative Exchange Council, a powerful clearinghouse of conservative legislation.

Republican support for marijuana reform is certainly rising. In 2016, for the first time, a 45 percent plurality of Republicans said they supported legalizing marijuana. Still, polls consistently show that Democrats and independents view pot use more favorably than Republicans. And Texas, for now, is very red.

Recreational marijuana is legal in eight states. Except for Alaska, all of those states are blue or at least purple. In Texas, where cities are more liberal than the state at large, the push for marijuana reform has often been local. Kim Ogg, the new Democratic district attorney of Harris County, decriminalized possession of small amounts of marijuana within months of entering office in January.

Across the United States, for pretty much all demographics, attitudes on marijuana are changing. Seventy-six percent of Americans now support legalizing recreational marijuana use, according to a June survey commissioned by the Marijuana Majority, a cannabis reform nonprofit. The poll numbers in Texas, already decisive, are also growing. A University of Texas/Texas Tribune poll from February found that 83 percent of Texans support legalizing at least medical marijuana – up from 76 percent in 2015.

The Texas House of Representatives is solidly Republican, 95 to 55, yet still nearly passed two major pot reform laws in May. When Texans go to the voting booths in 2018, it's unclear how many of those Republicans will keep their seats. 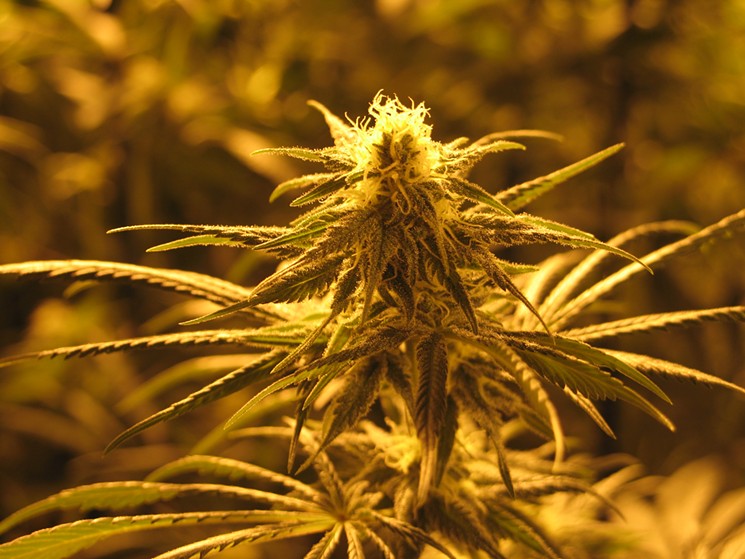 After Several Steps Forward In 2017, Here's What's Next For Texas Marijuana Policy