Marijuana Taxes On The Ballot This November

Voter approval of retail marijuana sales in Colorado and Washington State in 2012 presented lawmakers in those state capitals with a difficult task not faced before in the U.S.: how to tax and regulate legal recreational marijuana. As Joe Henchman, Vice President at the non-partisan Tax Foundation has pointed out, "Because marijuana can be purchased as a cigarette, an edible, a liquid, or vapor, all with a wide variety of concentrations, a specific excise tax is untenable." Since then, Colorado and Washington State lawmakers have imposed onerous and excessive taxes on marijuana; but on Nov. 4, Washington State voters will have the opportunity to tell their representatives in the state legislature to reconsider.

During the 2014 session of the Washington legislature, state lawmakers passed Senate Bill 6505, which deemed the marijuana industry to be non-agricultural, thereby removing excise tax protections that apply to the state's agriculture industry. This redefining of the industry will permit, if allowed to stand, more than $24 million in higher taxes over the next decade than would've otherwise been the case. On Nov. 4, Washington residents will vote on Advisory Question Number 8, a ballot measure that would urge the legislature to either maintain or repeal this reclassification of marijuana products as non-agricultural.

Washington State taxes marijuana with a 25 percent assessment on sales from producers to processors, a 25 percent tax on sales from processors to retailers, followed by another 25 percent tax on retail sales. That's not all. Then there is the Evergreen State's Business & Occupation gross receipts tax, a 6.5 percent state sales tax, along with local sales taxes. Altogether this brings the estimated effective tax rate on marijuana products to approximately 44 percent. In light of the onerous tax treatment of marijuana products and companies tied to that industry, it would be a positive development for Washington voters to vote repeal on Advisory Question 8 and urge lawmakers in Olympia to reverse the non-agricultural reclassification that will beget such punitive taxation.

But it's not just at the state level where the marijuana industry faces excessive and unfair taxation. It's a basic principle of sound tax policy that the code should not pick winners and losers or disproportionately target certain industries or groups of taxpayers. Yet unlike any other business, newly-legalized cannabis dispensaries are not allowed to deduct ordinary and necessary business expenses like equipment, rent, and wages from their federal taxable income.

In 2013, Americans for Tax Reform released "Legal Cannabis Dispensary Taxation: A Textbook Case of Punishing Law-Abiding Businesses Through the Tax Code," a policy brief examining the flawed federal tax treatment of marijuana dispensaries, how it came about, and how to fix it.

Fortunately a fix has been proposed; there is a bill pending in Congress sponsored by Congressmen Earl Blumenauer (D-Ore.) & Dana Rohrabacher (R-Calif.), H.R. 2240, which would fix this flawed tax regime by allowing the deduction of ordinary and necessary expenses for state-sanctioned cannabis dispensaries.

In a letter sent to members of Congress, ATR made the case why lawmakers should support H.R. 2240:

"H.R. 2240 corrects a mistake in the tax code Congress never intended to create. In an attempt to deny tax deductions connected to the illegal drug income of street dealers, Congress accidentally imposed a gross receipts tax on legal cannabis dispensaries a generation later.

Section 280E of the tax code denies 'ordinary and necessary' business expenses as a deduction against income derived from Schedule 1 substances. Unfortunately, tax law does not make any distinction between illegal street drug sales and state-established, legal cannabis dispensaries. These latter businesses comply fully with state law, pay all applicable taxes, and are vigorously regulated.

There is no reason why the tax code should deny ordinary and necessary business expenses to legitimate businesses established under state law. The result is an arbitrary and punitive situation where legal employers face very high average effective tax rates that Congress never sought to impose on businesses.

It's great to have 50 laboratories of democracy across the U.S., and the trials with legal marijuana taking place in Washington and Colorado will be instructive for other states and the federal government. Yet, when such heavy and unreasonable taxation is imposed, it blunts the positive effects of legal cannabis — such as the eradication of black markets and drug cartels — and makes it impossible to fully learn from the experience. Washington voters and members of Congress have the opportunity to help get it right, if they so choose. 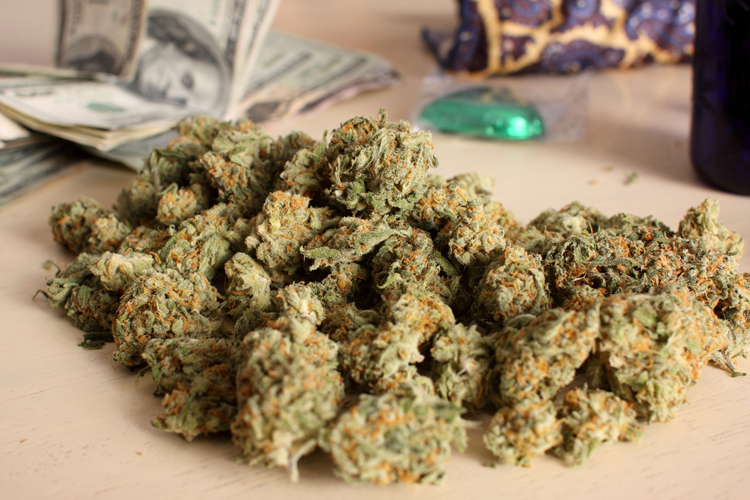 Taxes give me a headache.

"...a ballot measure that would urge the legislature to either maintain or repeal this reclassification of marijuana products as non-agricultural."

And figuring out which way to vote on ballot measures also gives me a headache (and necessitates creating a cheat sheet).

K
How Marijuana Companies Are Fighting The IRS