Sheffield farmer Ted Dobson wants to grow pot -- and he doesn't believe he needs an indoor warehouse with a state-of-the-art security system to do it.

"Having protected myself from wildlife for years and, if necessary, people, no farmer's going to allow any cash crop to get stolen," Dobson said. "We'll take necessary precautions."

"For the state to be fair-minded about this, they're going to have to look hard at this agricultural question," Dobson said.

One of the major efforts involves a new law establishing marijuana craft cooperatives.

Sen. Julian Cyr, D-Truro, introduced an amendment, which became law as part of a comprehensive cannabis bill, that will allow for craft cooperatives.

The cooperative model lets farmers band together to grow a limited amount of marijuana and split the costs and profits. The Cannabis Control Commission and the Department of Agricultural Resources will develop the rules for the cooperatives, including how much the licensing fee will be and what the limits are on ownership and marijuana growth.

The idea would be to let farmers grow their own crop, but split the costs of licensing fees, production, packaging, marketing, retail operations, etc.

"For traditional farmers ... it's about lowering the barriers of entry into the marijuana market," Cyr said. "The intent is there's a lower bar to entry for smaller scale cultivation."

The Massachusetts Grower Advocacy Council has proposed allowing different levels of licenses. For example, a micro-craft cultivation would involve three or four owners and 5,000 square feet of grow space. A craft cooperative grow would include seven or more owners and up to 15,000 square feet of growing space, which could be split among multiple farms, according to the council's proposal.

Peter Bernard, president of the Massachusetts Grower Advocacy Council, said craft marijuana could be similar to craft breweries: producing high-quality, specialty and more expensive products on a smaller scale than big commercial growers. He compared it to selling cheap wine versus the fancier Grey Goose vodka.

Massachusetts' existing medical marijuana industry has generally not been accessible to local farmers.

The law prohibits outdoor or greenhouse cultivation. Growers are required to also sell their own products. And the security requirements meant an investment of around $1 million just to enter the market, said Dan Bensonoff, Massachusetts policy director for the Northeast Organic Farming Association.

"It didn't really allow for an open and free marketplace," Bensonoff said.

Recreational marijuana, which was legalized by voters on the 2016 ballot, will be a much larger market. This time, farmers are hoping to get into the action -- and the potential profits.

"We want to make sure this time around, there's more of an equitable process and they're involved," Bensonoff said.

Farming groups successfully lobbied the Legislature to classify marijuana as an agricultural crop, which means it is allowed to be grown anywhere other agriculture is allowed. There are still questions, however, regarding whether a town has authority to ban marijuana growing through zoning. A town can vote to ban retail marijuana shops.

One big potential barrier that remains is security -- one of the areas where the Cannabis Control Commission still needs to write rules.

Farming groups worry the security requirements could be cost-prohibitive. For example, indoor growing facilities can be closed warehouses protected by fancy camera and surveillance systems. An outdoor farm would need to rely on fencing and different types of cameras.

"If you're going to make the security issue a wedge issue, this is how they'll keep us out," Dobson said.

From a business perspective, outdoor farmers will have to figure out if they can grow marijuana that avoids cross-contamination and that meets Massachusetts' strict testing requirements for things like mold, metal and pesticides. It is possible that hemp will be an easier crop for farmers to grow. Farmers could also use greenhouses for marijuana.

Dobson argues his organically grown outdoor cannabis would be more natural than cannabis grown in an indoor, hydroponic growing facility.

Lawrence Davis-Hollander, a Sheffield botanist working with Dobson, said it should be up to farmers to decide.

Davis-Hollander said farmers should not be kept out by onerous security or testing requirements. "A lot of it comes down to money," Davis-Hollander said. "If in the regulations, things like security are so onerous that they cost millions of dollars, most farmers aren't going to have that kind of money. It would put it out of their reach."

Bensonoff said a lot of farmers are struggling right now, and marijuana could be a cash crop. "I think that a lot of growers see this as a way to subsidize the rest of their farm business," Bensonoff said. 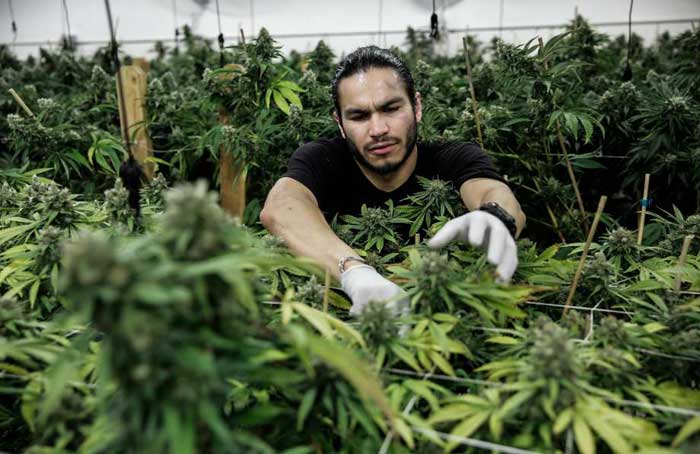 can't get into the racket without jumping the racket hoops.
file this. pay that. pay more. fill out papers. submit everything.
then someone else gets the license to grow, under spy conditions, allowing unlimited entry to whatever "regulator" the racket send in.
regulated racket. more of the same.