Tacoma Mayor Marilyn Strickland welcomed the city's first retail marijuana store Friday morning as some 80 customers waited for the doors to open. "In Tacoma, we want to do this the right way," Strickland said. "We knew there was a way to do this safely and responsibly." Unlike dignitaries who attended the opening of Seattle's first retail pot shop in early July, Strickland did not purchase any of the products for sale at Rainier on Pine.

The first person who did buy, however, was Joe LaPorte, who was in Tacoma Friday visiting from his home in Maine. A reporter asked LaPorte how it felt to be the first customer in town? "It's going to feel better later," he said, displaying a two-gram package of a cannabis strain called "Blueberry Kush." An hour after the opening, more than 53 people had spent $3,500, said Don Muridan, Rainier on Pine executive director.

In the early hours of the day, four men waited on the stoop before the store opened. Dave, 60, arrived around 6 a.m. and was first in line. The retired government employee from South Carolina, who preferred not to give his last name, said he was expecting more hoopla. "I was expecting a line, but there was no line," he said. "I was amazed that no one was here." Dave was the second buyer inside the store. LaPorte, who did give his last name, stood first at the counter.

A smoker when he was younger, Dave said he had recently taken up toking once again. Another early customer, Pir Gold, 26, said he recently arrived from Arizona. Also in the mix was retired Army First Sgt. Dale Reed, who said he has moved from Alabama to Washington specifically because marijuana is now legal in this state. "I drove up from Mobile four days ago," he said. "I moved up here for legalization." A disabled veteran, Reed said he has used prescription pain medication since his retirement. "Marijuana is better for me," he said. "I smoke a joint and I feel better. I'm more alert than on the pain pills." He said he did consider moving with his wife to the other state that has legalized pot. He even drove through it. "I just didn't like Colorado," he said. 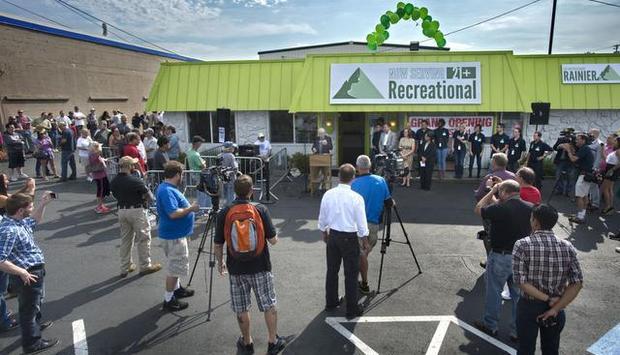 I am in awe ,envious, pissed off , wishing , hoping , happy 4 u ,that you have the ability to get your pot the way you can now. bloody good luck to you all. Just cannot imagine our Mayor waving the banner for legalised pot here in Perth Western Australia.
D

i wasnt at the opening, but by all account that i heard, it was a huge turn out. i'm hoping that public opinion continues to favor cannabis and Wa State will let go of its fear of the plant.

Although I left the state at 6 months old. It's nice to know my first hometown of Tacoma is now cannabis friendly

Sorry, you have to be blind drunk, and driving at night not to LOVE Colorado.

Jul 12, 2014
The General
T
T
One Tacoma Store Opens - Another Reopens And A Third Plans To Open This Afternoon