After about one month of medical marijuana sales in Maryland, Montgomery County leads the state in the number of patients certified to buy the substance.

A state database shows that as of Dec. 21, about 10,995 people in Maryland have gotten permission to shop at a medical cannabis dispensary. Of those, 1,710 are from Montgomery County, more than any other jurisdiction in the state, according to the report. Montgomery is the most populous county in Maryland.

Baltimore County has the next-highest number of patients, 1,312, while Frederick County follows with 1,131.

William Askinazi, owner of a dispensary in the Rockville area, said the demand has well exceeded his expectations. The number of customers in their 70s or 80s also has surprised him, he said.

"We thought there might be a stigma, but there's very little evidence of a stigma," said Askinazi, whose dispensary, Potomac Holistics, was the first to begin selling cannabis in Montgomery County.

Askinazi said the shop at 14808 Physicians Lane has drawn many local customers from Bethesda and Potomac, but also is seeing visitors from as far afield as Lexington Park and Baltimore.

In order to buy medical marijuana, Maryland residents first must register as a patient with the state by filling out an online application that asks them to upload an electronic copy of their driver's license and proof of address. About 17,500 people had completed this initial step by Dec. 20, including 2,505 patients from Montgomery County.

But before they can walk into a dispensary and buy medical cannabis, patients must get a doctor's written certification that the marijuana is an appropriate treatment for a qualifying medical condition. These could include severe pain or nausea, seizures, post-traumatic stress disorder or muscle spasms, according to the state's medical cannabis commission.

Nearly 11,000 people in Maryland finished registering as a certified patient by Dec. 21, a status that allows them to buy medical cannabis.

Askinazi said he expects that over the next two years, the total number certified will balloon to 120,000.

"I think that as more and more doctors get online, that'll lead to a dramatic increase in the number of patients, and as a number of dispensaries come online, there'll be more locations for people to go closer to their homes," Askinazi said.

The state has awarded licenses to 22 dispensaries across the state, six of which are in Montgomery County. However, many more companies have received preliminary approval to sell medical marijuana and are working on getting their final licenses.

RISE Bethesda in Wildwood Medical Center on Old Georgetown Road got up and running in the beginning of December, a day after Potomac Holistics.

Rebecca Brown, one of the RISE dispensary's owners in Bethesda, said business has calmed down since the crowds and lines that formed during opening weekend. In the opening days, there were problems with supply, but that also has evened out, she said.

Like Askinazi, she said the dispensary is seeing customers from all over the state.

"It's incredibly diverse–as diverse as the state," she said. 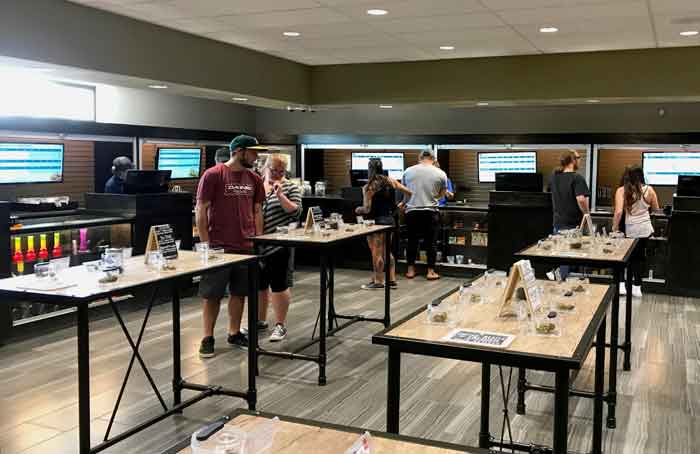 MD: Medical Cannabis Flies Off The Shelves As Dispensaries Open In Montgomery County