ME: Marijuana Convention In Portland Bigger Than Last Year's

Lee, who had driven up from her home in Carlstadt, New Jersey, to attend the two-day event, started peppering the York financial adviser with questions about the tax implications of setting up her own stable of cannabis businesses — something she is planning to do as soon as her state approves recreational marijuana.

"I want to do everything, from soup to nuts, from growing, to security to puff lounges. I've already lined up multiple LLCs," said Lee, a grant consultant who expressed confidence that New Jersey will legalize recreational marijuana use as soon as Gov. Chris Christie leaves office.

Lee was among the hundreds of entrepreneurial-minded attendees at the convention at the Portland Sports Complex on Warren Avenue. The convention, in its third year, has grown steadily each year.

Last year the convention drew 80 exhibitors and about 1,500 people during a one-day, five-hour event at the 16,000-square foot Sullivan Recreational and Fitness Complex on the University of Southern Maine's Portland campus.

But after Maine voters approved the legalization of recreational marijuana last November, Marc Shepard, co-founder of the network and associate publisher of the Portland Phoenix, immediately booked a larger venue — the 70,000-square foot Portland Sports Complex — for the 2017 convention. He increased the number of exhibitors to 120, and still had to turn away dozens of others.

As Shepard watched people pour into the complex Saturday morning, paying $20 a head to get in the doors, he guessed maybe 3,000 people would show up by the time the convention closes Sunday afternoon.

The convention comes as the Maine Legislature grapples with a rewrite of the Marijuana Legalization Act approved by a narrow margin by Maine voters last fall. The proposal is scheduled to come to a vote during an Oct. 23 special session of the Legislature. Although the bill has the support of recreational marijuana advocates, its fate in the Legislature is far from certain.

Gov. Paul LePage, who opposes legalized pot, has not said whether he will veto the bill, should it clear the Legislature. If LePage does veto the measure, it would take a two-thirds majority of lawmakers to overcome the veto.

If the bill fails, the ballot question voters approved last November will become law — and that, the bill's advocates say, could open up a black market for marijuana products.

Whatever the bill's fate, the marijuana industry in Maine is expected to generate hundreds of millions of dollars in sales and more than $21 million in new tax revenues, according estimates by the special committee working on the rewrite bill.

That market potential may explain the large crowds showing up at this year's convention, which offered up the same funky mix of booths as previous editions, with head shop retail outlets intermixed with businesses offering energy solutions, security services and gardening products.

Two lecture halls were set up, one focusing on the business of cannabis, with titles such as "Staging Your Business for Private Equity Funding," and the other on do-it-yourself issues with titles like "Setting Up Your Personal Cultivation Space."

Most of the exhibitors were from Maine and Massachusetts, which also legalized recreational marijuana last fall and is about where Maine is in its rule-making process. There were others from elsewhere in New England, as well as a few national players.

One of the lectures Saturday featured David Boyer of the Marijuana Policy Project and campaign manager for the Yes on 1 campaign. He gave a state-of the-industry update for Maine and said retail sales of cannabis are still months away from becoming a reality.

He said under the most optimistic scenario, retail sales will begin next summer in Maine. 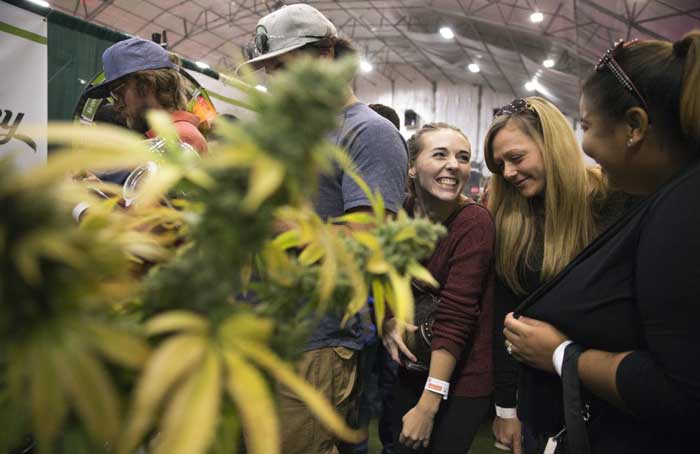