Dozens of advocates for legalizing medical marijuana rallied at New York's Capitol on Wednesday and blamed Gov. Andrew Cuomo for stalling a proposal that's before lawmakers. They asked Cuomo to support passing the measure before this year's regular legislative session concludes this week. "I don't understand how a politician who has no medical education or training is the one who's deciding the treatment my son can have or not have," said Missy Miller, whose 14-year-old son Oliver uses a wheelchair and suffers from hundreds of seizures. Certain strains of marijuana that are low in THC, the psychoactive ingredient that gets users high, have received international attention for curbing seizures in children.

"I don't understand how those same politicians hold my son and so many other New Yorkers who are suffering hostage," she said. Cuomo said Tuesday that even if the bill passes both chambers, he wouldn't sign it unless some of his concerns were addressed, including a ban on marijuana smoking and the inclusion of a five-year evaluation period. Amendments to the bill a day earlier meant to meet some of Cuomo's objections did not include the smoking ban or the evaluation period.

The bill's sponsors, Sen. Diane Savino and Assemblyman Richard Gottfried, removed three conditions for which marijuana could be prescribed: diabetes, lupus and post-concussion syndrome. Lawmakers also removed the advisory panel that would oversee the program, as Cuomo suggested, and gave more control to the state's health commissioner. The status of the bill remains fluid as negotiations continue among Cuomo, legislative leaders and the bill's sponsors. Cuomo has not ruled out issuing a special message that would waive the required three-day aging period for the medical marijuana legislation to come up for a vote, leaving patients and advocates hopeful that some movement on the issue can be made by Thursday.

"When it comes to the medical marijuana bill, I am less pliable than usual because the consequences are very serious," Cuomo said at an unrelated news conference. Advocates and children in wheelchairs lined the hallway outside of his office demanding a vote on the proposal and slamming his comment that marijuana is a gateway drug. "Clearly the statement is not borne by the facts," said Erik Williams, director of Gaia Plant-Based Medicine, a Colorado-based marijuana business, citing a 12-year study done by the University of Pittsburgh in 2006 that concluded marijuana is not a gateway drug. 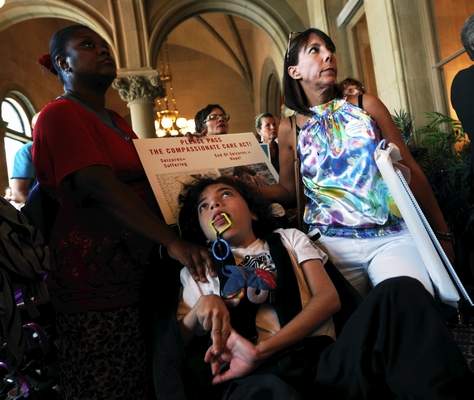 Jan 7, 2014
The General
T
T
Medical Marijuana Shapes Up As The Most Prominent 2014 Albany Issue