Medical Marijuana Apps On The Rise

Despite the Federal and County Crackdowns, Smartphone-App Business Is Still Smokin'

Medical-cannabis patients are increasingly turning to their smartphones to easily find deals of the day, scan dispensary menus, and even schedule dispensary-provided services such as yoga. A tour of the Apple App Store and the Android Market reveals a rapidly advancing world of weed apps, even amid the crackdown by the U.S. Department of Justice.

This makes sense, actually: Dispensaries ratcheted down visibility, pulling TV and print ads and even closing shops, but have turned to smartphone and tablet apps and email lists to roust business.

Whether it's studying up on strains, finding a physician who specializes in the medicinal herb, staying informed or ending prohibition, the future of the medical-cannabis industry is more than ever playing out on mobile technology. Here are some of our favorites:

On January 26, classy strain encyclopedia Leafly launched the free Android version of its iPhone app, which rounds out the Orange County company's digital presence since the 18-month-old business reset the bar on site design. The Leafly reports 1,000 app downloads a day, and 40 percent of those downloaders convert into weekly Leafly app users.

The three coders who started Leafly have now quit their day jobs and hired three employees, and they're currently in the process of hiring five more.

But the October crackdown has been the biggest hurdle for the growing company, explained Scott Vickers, Leafly co-founder and developer. "It's a weird kind of time, but it's exciting," he said. "The uncertainty in the market seems to have driven patients our way in search of more information."

There's a map for that

WeedMaps boasts a massive national dispensary database with menus that the company updates frequently. Travelers often use it to find new clubs, and then review their experiences. Even with the crackdown, Legal Maps is seeing more downloads and should soon edge into the top 25 medical apps in the App Store.

Americans for Safe Access, a national patient-support organization, has apps for both the iPhone and iPad. While they largely solicit donations, the free apps also help patients contact Congress members, sign petitions, find news and legal information, and join ASA programs-just the beginning of tech-enabled activism.

Dispensaries get into the app

Apps for collectives often are powered by the San Francisco company MyDispensary Mobile App, which was a project of S.F. medical-cannabis company The ArcView Group, headed by Troy Dayton, who is also a co-founder of Students for Sensible Drug Policy. Dayton said that MyDispensary app was created to first serve one of the largest dispensaries in the state, Harborside Health and Wellness, but grew into a resource-taxing app business. "They just took off," Dayton said of the apps.

Dayton also said that MyDispensary app was recently acquired for an undisclosed sum by the Los Angeles company StickyGuide, a leading dispensary-profile directory with menus.

StickyGuide owner Nick Miller ( not SN&R's managing editor ) said that even mom-and-pop shops have real-time inventory-management needs, much like an Apple Store, and when clubs run out of advertised product by the time the patient arrives, it infuriates them.

"The inventory is so boutique. All these products are different and in such limited supply, that it adds a whole other level of urgency to it," Miller said. "So many people are checking menus every hour for new stuff and rushing down there trying to get it before it sells out."

StickyGuide intends to cut app-development costs for dispensaries and improve on what MyDispensary built. Planned features include online ordering, so reserving that hot strain is just a click away.

The cannabis app space is still a veritable green field for developers, Miller said, though the October crackdown "shook everyone up," he said.

"It's two steps forward, one step back. The short term might be iffy, but the long term has never been better," Dayton added. 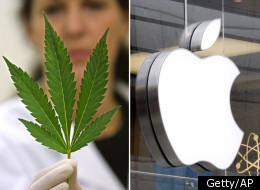 4
Medical Marijuana Apps On The Rise