Topeka - Parents of chronically ill children gave emotional testimony Wednesday at a hearing on allowing medical marijuana in Kansas, telling state senators that the drug could help their kids.

The Kansas Senate Public Health and Welfare Committee heard from parents and others about a bill, introduced by Kansas City Democratic Sen. David Haley, that would legalize the use of marijuana-based products for medical purposes and establish regulations for their distribution.

Christine Bay said it was a "relief" to be able to speak to the committee as she believes medical marijuana is the last option to treat her 3-year-old daughter, Autumn, who suffers from sodium channelopathy. The rare condition causes Autumn to suffer from prolonged seizures that land her in intensive care three to four times per month, Bay said.

"Her pediatrician wants her to have the opportunity to try cannabis oil," the Lenexa resident told the committee. "I ask that you allow our doctors to do their job and preserve the lives of these children and patients."

Donna Reed of Baldwin City testified that she would soon be moving Colorado to be with her 3-year-old grandchild, Otis, whose parents moved him there to receive marijuana treatments for epilepsy after other treatments failed to improve his condition.

"There was not a moment of hesitation in our minds that Otis needed to try this," Reed said.

Other speakers included legal and medical professionals as well as others who say medical marijuana would provide potentially lifesaving benefits to themselves or their children.

Sen. Mary Pilcher-Cook, a Republican from Shawnee who chairs the committee, called the testimony by parents of sick children "heartbreaking." She said the committee will decide whether or not to move ahead with the hearing process after an informational session Thursday.

Medical marijuana bills have been filed in Kansas every year since 2009, but none thus far have moved beyond informational hearings.

Tatiana Lin, a senior analyst at the Kansas Health Institute, testified about a draft report on the potential impact of the legislation. Lin said the institute looked at existing literature and data from four states with medical marijuana legislation. 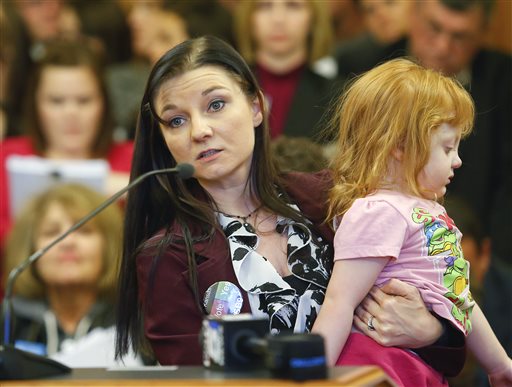 simple people start petitions and get it before the voters in 2016 if the bills stalls again and doesn't make the floor. We the people did it in Colo., Wash., Alaska, Oregon, and Washington D.C. Waiting for the rest of the country to catch up with us lol.
H

check Colo stats all crime is DOWN murders in Denver are down 52%, teen use is DOWN, traffic fatalities and suicides are down, prescription dope deaths are down since 75.5% of medical cannabis patients no longer buy and use big pharms addicting killing poisons anymore, alcohol consumption is down and the schools get $40,000,000.00 in cannabis tax dollars. Sounds like the kind of stats every stste would want not to mention unemployment is down economy is up. over 11,000 new jobs were created.