Medical Marijuana Bill Hits Brick Wall In Pa. House, Unlikely To Get A Vote This Year

Leaders of the Republican-controlled House of Representatives say they aren't saying: "No, never," when it comes to legalizing marijuana for medicinal purposes in Pennsylvania. But they are saying: "No, not yet." Staffers for House Majority Leader Leader Mike Turzai, R-Allegheny County, said Monday that the caucus does want to take a thorough look at the marijuana bill that passed the Senate last week, including public hearings. But that means there is practically no chance that the legislation, which passed the Senate on a 43-7 vote and is being referred to the House Judiciary Committee, will reach the House floor this fall.

Steve Miskin, Turzai's press secretary, said Monday that shouldn't come as a shock to anyone who's been following the debate in Harrisburg. The Senate, Miskin noted, took nearly a year to develop its bill. It would be unrealistic "and irresponsible (for House members new to the issue) to just rubber-stamp a bill that creates an entire new bureaucracy" in less than two weeks, Miskin said.

There are a couple of reasons for the long view prevailing in the House: Given the limited time left in session, House leaders are more interested in devoting their time to a bill establishing a statewide prescription monitoring program to help doctors fight prescription painkiller abuse, several sources said. The monitoring bill, sponsored by Sen. Patricia Vance, R-Cumberland County, has widespread support, is on track for final passage with a little more energy, and many feel it could have a bigger impact on one of the state's major problems.

Turzai does not like to run bills that don't have support from the bulk of his members. And unlike in the Senate — where medical marijuana supporters had focused an intense and often emotional lobbying effort — it is not clear yet that a majority of the majority GOP members support the bill in the House. Rep. Eugene DiGirolamo, R-Bucks County, - one of the Legislature's leading proponents for more aggressive support pf drug treatment programs - said Monday that while he's OK with the bill conceptually, he needs to be sure that its language doesn't unintentionally open the door to marijuana possession by people "we don't want getting it... I think it's important that whatever we do, we get it right," DiGirolamo said.

With Gov. Tom Corbett preferring a much more limited regime of medical marijuana trials, House leaders aren't anxious to drop a controversial issue in his lap in the last month of his re-election campaign. With all of those points in mind, the GOP leadership actually appears determined to keep the marijuana bill off the floor this month.

A Pittsburgh Democrat, Rep. Edward Gainey, attached language mirroring the Senate's bill to another piece of legislation before the House that would permit Pennsylvania physicians to prescribe substitutes for brand name drugs under certain circumstances. Gainey could not be reached for comment Monday, but House Democrat spokesman Bill Patton said the amendment was seen as a last-ditch effort to win passage of the Folmer bill this year.

"Republican leaders said they want a committee hearing on the Folmer bill, but the Speaker has yet to refer that bill to any committee," Patton noted Monday. "Offering the same language as a House amendment will let all members weigh the issue with time to act this fall." Under the Senate-passed bill, a new state board of medical cannabis licensing would license growers to legally grow marijuana for distribution to processors and dispensers.

Pennsylvania residents with conditions including epilepsy, cancer or post-traumatic stress disorder would apply to the Department of Health to be issued medical cannabis access cards. The application would have to include a certification from a doctor stating the applicant has one of the qualified medical conditions. But House GOP leadership sources said they don't even expect the Gainey language to hit the floor this week.

If the Pittsburgh Democrat doesn't drop his amendment voluntarily, the leaders would likely try one of several potential parliamentary moves to avoid having that debate right now, the sources said. Sen. Mike Folmer, the Lebanon County Republican who worked painstakingly to rally support for Senate Bill 1182 in that chamber over the last year, expressed disappointment at the House leaders' direction Monday night. But Folmer said if he has to carry the into next year, he will, because he believes any member who closely analyzes the issue will see that it will only help, not harm, the overall fight against drug abuse.

"I think if I get a floor vote, I win; and I win overwhelmingly," Folmer said. If there is any silver lining for medicinal marijuana supporters - led at the grassroots level by mothers of children who suffer from a variety of seizure disorders - it is that the prospects do seem good for a win in the long run. Public opinion polling - which often leads elected officials' thinking much like the stock market indexes lead the economy - has shown broad and growing support for medicinal marijuana for some time now.

Several House Republican members reached Monday said they are conceptually in support of the move, and that support is even starting to show in the most conservative corners of the caucus. Rep. Jeff Pyle, R-Indiana County, noted he's been visited from constituents whose daughter suffers an estimated 30 seizures a day, and who believe oils developed from marijuana plants would reduce them. As the father of two teenagers, Pyle said he is very sensitive to doing anything that would tend to normalize drug usage. On the other hand, he said, "I can't be the one that keeps that little girl from being well." 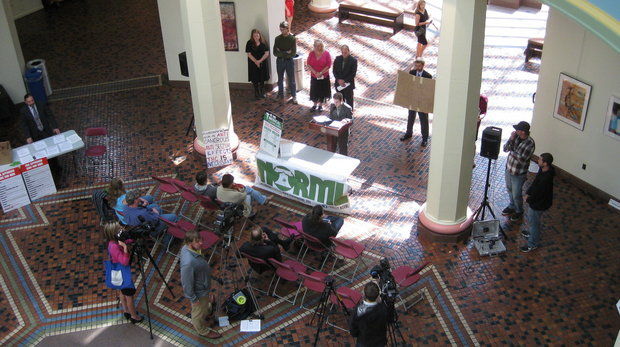