Recent legislation in the state Senate that would legalize medical marijuana has sparked conversation across Pennsylvania.

The Senate Bill 3, a medical marijuana bill, has been introduced after its equivalent counterpart, State Bill 1182 - which was overwhelmingly supported in the Senate - died in the state House of Representatives at the end of last term.

And, former Gov. Tom Corbett had said he did not support State Bill 1182. But Gov. Tom Wolf has already pledged to sign the reintroduced bill after meeting with mothers whose children suffer from severe seizures, according to an Associated Press report.

Campaign for Compassion has been a group at the forefront of the debate on medical marijuana in Pennsylvania, advocating the use of the drug for children suffering severe seizures.

In the meantime, the state House of Health and Judiciary Committees are asking both sides their opinions on medical marijuana in joint public hearings in cities across the state.

One hearing was held on March 24 in Philadelphia. Two other hearings are slated for this month, one in Harrisburg on April 8 and the other in Pittsburgh on April 29.

"I think it's very important that Pennsylvania join the 23 states who have already legalized medical marijuana. It's not like we're reinventing the wheel here," said George Cimochowski, a cannabis entrepreneur who said he is involved in the cause for the betterment of patient care.

Cimochowski (senior-psychology) said he hopes to open a dispensary should the legislation pass, but hopes that the current bill will be broader.

The co-sponsors of the Medical Cannabis Act, state Sen. Daylin Leach and Sen. Mike Folmer, are also hoping to amend the current bill to include the many patients who would be left behind.

SB 3 is the same as the medical marijuana bill that died in the House last term. The bill authorizes 10 medical conditions - including cancer, epilepsy and Parkinson's disease - that would qualify for the medical use of cannabis.

Leach and Folmer would like the bill in its final form to give doctors the power to decide whom they should prescribe cannabis to.

"It's going to give the power to doctors instead of politicians," Cimochowski said.

The bill also does not include the smoking or vaporization of cannabis.

"You should not reduce the way people can take this benefit," Cimochowski said, who added that different medical conditions benefit from different ways of metabolizing the drug.

Cimochowski also plans on educating and lobbying the local government. He is concerned that, should the bill pass, the borough of State College would still have the power to prohibit dispensaries within the borough.

But for now, the State Senate Government Committee is reviewing the bill before it can move back for voting in the state Senate.

Brianna Lites (senior—recreation, parks and tourism management) said, "It can be a good thing, but there's a lot that people don't think about."

She is concerned that legalizing marijuana for medical use would help "white men trying to capitalize on it," while so many African Americans are in prison for crimes related to marijuana.

During Penn State President Eric Barron's student town forum on March 30, where he addressed the university's budget, Barron said the university remains neutral on the subject. 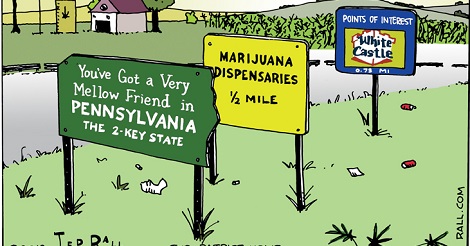 T
Medical Cannabis Bill Could Get Push In Pennsylvania