Perry Parks, a 68-year-old former Vietnam helicopter pilot, is relentless in his campaign to persuade North Carolina's legislature to legalize the use of marijuana for medical purposes.

He doesn't just walk the halls of the legislature, often attired in his old National Guard uniform. To publicize his cause, he agreed to be photographed smoking a bong - a picture seen on national television and in newspapers as far as way as Japan.

"I call it the hit heard around the world," Parks quips. "It's all over the Internet."

Like a Tar Heel Forrest Gump, Parks has a habit of turning up at the side of notable political leaders, whether Gov. Bev Perdue, U.S. Sen. Kay Hagan, N.C. House Speaker Thom Tillis or President Barack Obama.

He has twice persuaded the N.C. Democratic Party's executive committee to pass a resolution supporting legalizing marijuana for medical reasons, although party leaders seem skittish about the issue.

But it will be far harder to persuade the legislature to do so. A bill legalizing medical marijuana did not get very far last session when the Democrats were in control, and it likely faces an even more difficult road now that the more socially conservative Republicans are in power.

But that has not deterred Parks, an intense man, who like all crusaders, believes that if he just has a chance to sit down and explain his position, people will come around to his point of view.

He is doing this, Parks says, for his fellow veterans, many of whom are dealing with chronic pain, and have found that marijuana provides them relief.

"I have veterans that call me every day who are being arrested or being kicked out of VA clinics because we don't have a state law," Parks says.

But while veterans are his primary motivation, the bill that has been introduced would make medical marijuana available to anyone who meets the medical guidelines. In December, Parks was elected president of the N. C. Cannabis Patients Network, a group that counts 1,000 members.

This is the second session that a bill legalizing marijuana for medical purposes - but not legalizing it generally - has been introduced in the state legislature. Last session, the bill got a hearing in the House Health Committee, but this time it has not gotten that far, and is stuck in the House Rules Committee, a burial ground for bills.

Rep. Stephen LaRoque of Kinston, co-chairman of the Rules Committee, said he would hold a hearing if the N.C. Medical Society expressed an interest in it. But the group, which represents doctors, has not endorsed the bill.

State Rep. Kelly Alexander of Charlotte, the bill's chief sponsor, said much of the political and medical establishment are wary of the legislation, although privately many will say they know people who have been helped by the medical use of marijuana.

"Everyone in the world of officials is afraid of it," Alexander said. "That is why open discussion and open dialogue is important."

Alexander said there are 20 ailments that medical marijuana has been proven to have some positive effect on, including helping those undergoing chemotherapy treatment. And he cited a recent article published by the National Institute of Health that suggested that cannabis can play some role in retarding the growth of cancer tumors.

The bill would allow doctors to prescribe marijuana for a number of prescribed ailments and conditions such as cancer, AIDS, Alzheimer's, diabetes, Crohn's disease, hypertension, severe nausea and epilepsy. The state Department of Agriculture would oversee a licensing system for growing marijuana.

Fifteen states and the District of Columbia allow marijuana to be used for medical purposes. But no state in the South allows it.

Parks says he gets it. He is career military, a resident of small-town North Carolina, and a Christian. His grandson played every quarter last season for the University of Alabama football team.

"This stuff totally removed my pain"' Parks says of the marijuana. "I couldn't believe it. I prayed about it. My preacher told me I was still wrong. I went back and prayed about it."

Parks spent 28 years in the military, as a chief warrant officer 4, flying helicopters in Vietnam and later with the National Guard.

In his 30 months in Vietnam, Parks said he earned the Distinguished Flying Cross, two Bronze Stars and the Air Medal - 31 times.

He went through a difficult period after Vietnam with drugs, but got his life back together, married and raised a family, eventually settling in Rockingham. He became a corporate pilot for Murphy Farms and worked as a pilot examiner for the Federal Aviation Administration. 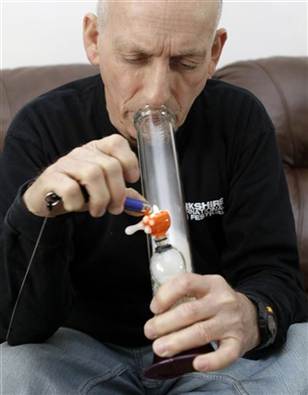 Medical Marijuana Gets Backing From Democrats