Just a year ago, Brionne Corbray was a flashy entrepreneur in the Seattle medical-marijuana market, with a late-model Mercedes-Benz and three storefront dispensaries to his name, including a White Center smoking lounge he described as "like a bar, without the alcohol."

On Wednesday, he gained a new distinction – the first local owner of a medical-marijuana dispensary to be sentenced on federal drug-dealing charges.

Federal prosecutors sought a one-year sentence for Corbray, 48, as a means to put a chill on Seattle's booming but legally questionable dispensary market.

Instead, U.S. District Court Judge Ricardo Martinez gave Corbray five years of probation, a $25,000 fine and a warning to not screw up again.

Corbray pleaded guilty in August to conspiracy to deal drugs based on a series of undercover purchases of marijuana at his G.A.M.E. Collective locations in West Seattle, White Center and North Seattle.

At the White Center site, federal agents found a gun, and prosecutors contended the smoking lounge was a flagrant violation of state and federal law.

During a raid of the dispensaries and Corbray's home in November 2011, federal agents seized seven pounds of dried marijuana and $1,700, as well as hash oil and THC-infused "medibles."

Much of the sentencing Wednesday focused on the conflict between the state law allowing medical use of marijuana and the federal prohibition.

Assistant U.S. Attorney Vince Lombardi said Corbray knew his dispensaries were clearly illegal under federal law and weren't consistent with "letter of state law ... or with even the spirit of state law."

"If we are going to have an intelligent discussion on (drug) reform – a discussion about what is the right way and the wrong way to deal with marijuana – you have to have consequences for people doing it wrong. And Mr. Corbray was doing it wrong," said Lombardi.

Corbray's attorney, Corey Endo, portrayed him as a devoted family man and an old-school entrepreneur operating in a legal gray area.

"Mr. Corbray doesn't need to bear the brunt – any more than he already has – for the mixed messages" sent by the local, state and federal handling of medical marijuana, he said.

Martinez said he was putting aside "the marijuana question." Speaking to Corbray, Martinez said he would not impose prison time because "you were trying to skate on the legal side of things as much as you could."

Corbray, who has a wife and four children, agreed. "I didn't get into this to be a drug dealer. "I got into this to provide a living for my family."

At least two other similar cases are pending. Former Seattle medical-marijuana dispensary owners Craig Dieffenbach and Jingjing Mo, who were also targeted in the November 2011 raid, have pleaded guilty to federal drug-dealing charges and are to be sentenced Jan. 10.

"Mr. Corbray will be the first to come before this court, but he won't be the last," he said. He declined to elaborate. 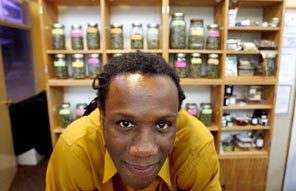