Though Colorado has been referred to as the "Amsterdam of the West" since it legalized marijuana, state residents are still clashing with federal regulations, which outlaw the use of weed, even if used for medicinal purposes. The federal "zero-tolerance" policy is the cause of one Colorado woman's new problems. Lea Olivier, 87, suffers from arthritis and has been using medical marijuana to help ease her joint pain. But she also lives in federally-subsidized low-income housing, meaning the federal government has its say over state laws when it comes to the residents' use of drugs. After a compliance officer, who was inspecting the residence, smelled pot, Olivier was given the boot and told to find alternate housing, even though she technically lives in a state that allows recreational and medicinal use of marijuana. "A compliance officer said they smelled pot coming from my residence," Olivier told the Cortez Journal. "I don't think it was even me. I've used it before to ease arthritis pain."

Indeed, the Cortez Journal reports that "some residents are finding out the hard way that there is a glaring discrepancy between Colorado's liberal marijuana laws and the federal government's outright ban on the substance." It has become confusing for residents in federal housing who believe it's okay to use marijuana since Amendment 64 began rolling out in January 2014. But the housing authority states that it has to comply with federal regulations "or we lose our subsidies for people who need housing assistance," Terri Wheeler, executive director of Housing Authority of Montezuma County, said. And it's not just federal housing that becomes a problem for Colorado state residents – it's also other federally owned facilities that outlaw marijuana, from national forests and parks to airports and monuments – that confuse many state residents. "I'm tired of their petty demands," Olivier told the Cortez Journal. "Now I have to use pain pills, which I don't like to do."

Medical marijuana has been shown to treat various pains, aches, diseases, and disorders – from severe seizures to tension headaches. But not enough research has been done to solidify evidence, mostly because it's nearly impossible for scientists to jump through hoops to legally obtain the drug in order to study it. So it's often difficult for sick people to make a case against the government, despite the fact that medical marijuana brings them or their children significant relief. Olivier isn't the first to complain about the federal ban on medical marijuana and probably won't be the last. Others who suffer from cancer or other ailments nationwide have been battling the federal regulations, often in court. One Iowa cancer patient, suffering from the pain of chemotherapy and a rare form of cancer that attacks the blood vessels, was placed on trial for growing marijuana in his home.

Other states are beginning to take baby steps forward. New York state, for example, recently signed into effect the "Compassionate Care Act" which bans marijuana smoking but mandates individual dosing of medical cannabis for patients who need it. In addition, Illinois recently allowed medical marijuana to be used for children with severe seizure disorders. Olivier, like other sick patients who just need a bit of weed to ease their pain, however, will get back up regardless of federal obstacles. "I'll live in a tent, or my car if I have to," Olivier told the Journal. "I've got 10 days to move, but when I get knocked down I get back up." 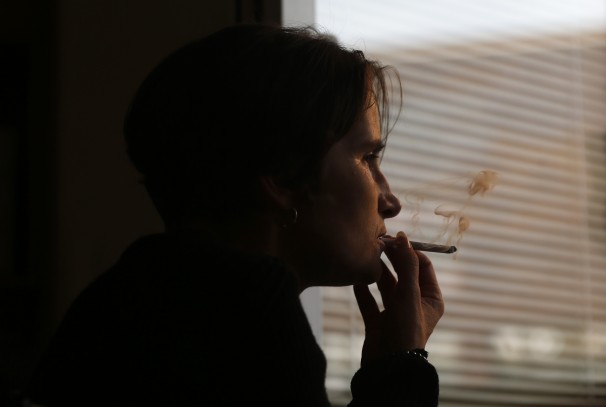 How long does stuff have to go on? She's a threat to what?
E


She is a threat to Big Pharma profits. And to the absolute control of the population by a totalitarian government (bought and paid for by those same profits.)

Jackson Woman Evicted From Federal Housing For Medical Pot Use