Question: I have a cat who suffers from inflammatory bowel disease and a dog whose arthritis has gotten really bad now that he's 13. I asked my veterinarian about using medical marijuana for them, and he actually laughed at me. If it's legal for humans why wouldn't it be OK for pets?

Answer: Despite your veterinarian's reaction, medical marijuana is as hot a topic in veterinary medicine as it is in human medicine. And why not? If there's a legitimate therapeutic use for any given drug used to treat one mammal, it stands to reason that other mammals might find it beneficial, too.

In fact, many medicinal uses for marijuana were pioneered in dogs first. For decades, dogs have successfully been used as a research model to investigate marijuana's potential efficacy in human subjects.

Trouble is, marijuana is also a known toxin especially to dogs, who seem very sensitive to the effects of THC, the molecules that exerts psychoactive effects on the brain. Dogs can get very sick after eating the drug, requiring immediate emergency care if significant amounts are ingested.

Thankfully, however, marijuana's medical benefits aren't so much traced to the high-inducing THCs as they are to CBDs, molecules also found in the cannabis plant. Used to treat inflammation, pain, seizures and other disorders, CBD molecules are infused into oils that can be safely ingested by dogs and cats without any discernible side-effects at a wide range of safe doses.

Dogs and cats suffering acute pain or from chronic conditions like osteoarthritis, epilepsy, spinal disk disease, allergic skin disease, inflammatory bowel disease and stomatitis, among others, may now safely and legally receive CBD oil according to Florida state law as long as they have a veterinarian's prescription.

While federal law remains unclear on this point, veterinarians in states where medical marijuana is legal have not encountered any legal resistance to prescribing CBD oils for legitimate therapeutic purposes.

Unfortunately, marijuana suffers from a dearth of evidence proving that it does what its purported to do. In fact, its harshest critics claim that its champions are re-packaging a recreational drug as modern-day snake oil.

For what it's worth, even our hospital carries CBD "snake" oils. And why not? After all, our shelves are stocked with plenty of drugs whose use in pets is similarly unproven and whose risk-benefit ratios are far more suspect. Given its high safety margin and low abuse potential, CBD oil seems a safe bet for pets. 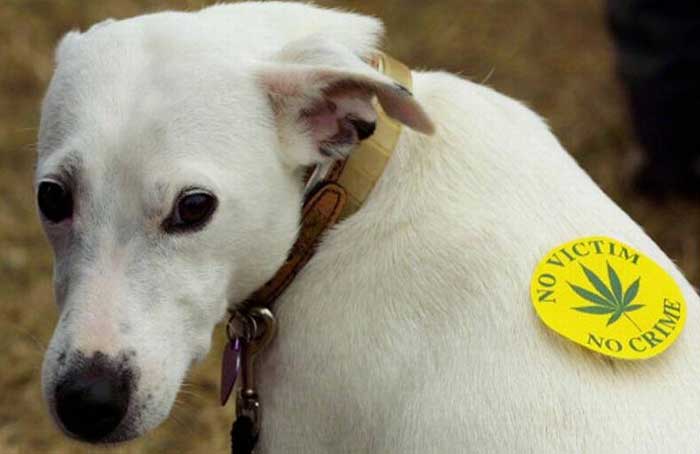 Experts Say Medical Marijuana Could Be Good For Pets

Medical Marijuana For Your Dog: Is It Safe

Pot For Pets: Could Medical Marijuana Help Your Dog