Medical Marijuana For PTSD? 'It Can Break A Panic Attack Pretty Quick'

Medical marijuana supporters in Oregon are seeking to add post-traumatic stress disorder to the list of conditions that qualify patients in the state to use medical marijuana.

According to advocates, many people with PTSD are already in the state program because they have other medical conditions that allow them to legally use marijuana.

But supporters want PTSD to be recognized as a standalone condition as more veterans return home and struggle to resume their lives, The Oregonian reports.

Oregon is home to an estimated 300,000 veterans. They include more than 20,000 from the Iraq and Afghanistan conflicts, according to the Oregon Department of Veterans' Affairs.

Law enforcement entities in the state generally oppose expansion of the program.

"We treat it like any other new treatment technique: We want to see it studied. We want to see increased research to see if it's a viable solution," said Hansman, whose group represents 145,000 veterans.

For some veterans, medical marijuana helps them function.

Townsend, of Hillsboro, qualifies for medical marijuana because of severe pain from a ruptured disc and injured shoulder from his 2007-08 combat tour. Medical marijuana is a bigger help with his PTSD symptoms, he said.

"If I get racing thoughts and real worked up, it can break a panic attack pretty quick," Townsend said.

Seventeen states and Washington, D.C., have medical marijuana laws. Only a few, however, list PTSD as a qualifying condition. 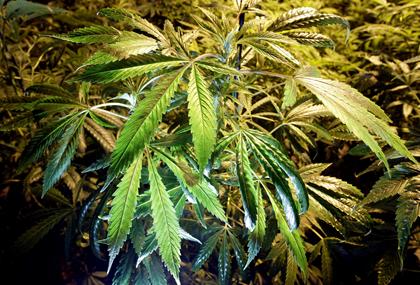 T
Medical Marijuana For PTSD? 'It Can Break A Panic Attack Pretty Quick'