Medical Marijuana For Your Pet

More people are using medical marijuana to treat pets for a variety of conditions, ranging from separation anxiety and noise phobia to cancer, according to the Journal of the American Veterinary Medical Association (JAVMA) News. Now, as more states begin to legalize the drug for humans, veterinarians and pet owners are calling for more research into the use and safety of the drug in pets.

After using medical marijuana to treat his own chronic back pain, Enest Misko, a 77-year-old from Chatsworth, Calif., decided to use a form of the drug to treat his pet cat, Borzo, who was having difficulty walking. Misko gave the cat a glycerin tincture of marijuana made for pets, and within a few days of taking the drug, Misko said the cat appeared to be pain-free. The drug can be found in licensed medical marijuana dispensaries in Los Angeles.

"I don't get high from (marijuana), but the pain goes away. So I tried it on my cat, my 24-year-old cat, who's feeling better," Misko told the JAVMA News.

Within the past few years, veterinarians have noticed an uptick in people claiming to use medical marijuana treatments for their pets and some have even begun to experiment with it on their own pets.
Dr. Douglas Kramer, a veterinarian in Los Angeles, Calif., who runs a mobile office focused on pain management and palliative care for pets, noted that approximately 300 people have told him they've treated their pets with medical marijuana since 2011.

Kramer became intrigued by the drug's potential when his Siberian husky, Nikita, was diagnosed with terminal cancer.

"Nikita was wasting away, and she'd stopped eating," he told JAVMA News. "I'd exhausted every available pharmaceutical pain option, even steroids. At that point, it was a quality of life issue, and I felt like I'd try anything to ease her suffering."

After Kramer began feeding Nikita small amounts of marijuana, the dog's appetite returned, and she rested more comfortably during her final months.

Based on his own reviews of medical marijuana research, Kramer believes the drug may be suitable for use in veterinary patients and that it deserves more attention from the veterinary research community.

"I don't want to come across as being overly in favor of giving marijuana to pets," Kramer told JAVMA News. "My position is the same as the (American Medical Association's position). We need to investigate marijuana further to determine whether the case reports I'm hearing are true or whether there's a placebo effect at work. We also need to know what the risks are."

Other veterinarians note that medical marijuana has the potential to be used in pet treatments but agree that more research needs to be done. Dr. Dawn Boothe, director of the Clinical Pharmacology Laboratory at Auburn University's College of Veterinary Medicine, said it wouldn't surprise her to see FDA-approved drugs made from cannabinoid derivatives being used in pets one day.

"My gut reaction is they do probably provide some therapeutic effect benefit," said Boothe. "But, I'm never going to say there's enough benefit that marijuana should be given to pets. I'm saying there's enough justification that we need to study it." 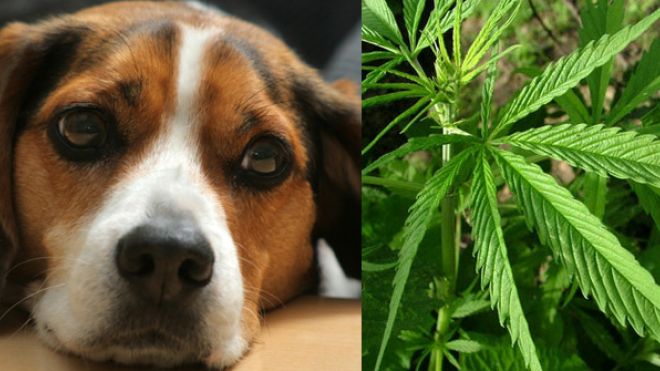 That's awesome. Glad to hear your little buddy is doing better. Unfortunately for me I do not live in a legal state yet, so my resources are somewhat limited at the moment (at least until my personal grows done) but I have a 2 year old blue nose pit. She's always been sort of a picky eater since I got her, but it seemed the older she got the less she started to eat. Plus I moved her with me down the east coast, which I knows been hard for her being away from my grandparents (she loves them). Not knowing what else to try and knowing some things that medical marijuana treats (such as eating disorders) I figured why not. One night before I put her food in her bowl I blew a small bit of smoke at her. Needless to say 2 months later her eating habits have improved dramatically. It's amazing everything our lovely medicine can do.

I just seen this thread....our little Yorkie loves to lick the residue of concentrated cannabis oil (just a couple of licks). They should love MJ as they have receptors for cannabinoids like we do. I have a friend who treats his Golden Retriever who has skin cancer (topical application mixed with coconut oil) and it took 8 weeks to completely heal. It was a mixture of Blue Dream/ Harlequin. Also the Retriever had severe arthritis in its back right leg from an apparent accident (don't know how, it was adopted) and you would never know it. Dog looks and acts HEALTHY ! Thought I'd share

I know if my dog is about to kick the bucket or has something wrong I will do everything I possibly can to help out. If it's Mary Jane that helps out then that's just great. Mary Jane it is.

Oh man I have two golden retrievers and would do anything to help them. Keeping my fingers crossed for MM in Floriduh.

Retreivers are such an awesome dog! I wish I could have a couple but I have allergies to all the shedding. I have a little white Bichon Friese. Very funny and enjoyable little dog. Hope everyones pets stay healthy.

T
Medical Marijuana For Your Pet