Toledo, Oregon - After losing more than 40 pounds from daily uncontrolled vomiting, Lauryn Cummings-Morford says medical marijuana finally gave her her life back. Now, Cummings-Morford, 21, is on a mission to remove the stigma from the drug. In June 2013, she began waking up nauseated and vomiting. Diagnosis ran the gamut from gallbladder to thyroid problems. Medication didn't help. Out of other explanations, doctors diagnosed her with cyclic vomiting syndrome. For months she subsisted on Ensure drinks and saltine crackers.

In September, she made three trips to the emergency room in one week because of the pain. "At my last visit to the emergency room, the doctor told my parents that there was nothing wrong with me, and I was probably there for pain medication," Cummings-Morford says. Faced with exploratory surgery or trying medical marijuana, she opted for cannabis. After obtaining her Oregon Medical Marijuana Program (OMMP) card, she obtained a liquid tincture in Salem. A dropper full under her tongue brought the relief nearly a dozen prescriptions drugs had failed to deliver. "On my way home that day I cried because my stomach stopped spasming," she recalls. "It was the first time I got relief besides having morphine or whatever the emergency room had given me."

No Easy Decision
A police officer's daughter, Cummings-Morford didn't make the decision to try medical marijuana lightly. The 2011 Newport High School graduate says her only previous experience with marijuana was being caught at age 16 by her parents after trying it at party. "I just remember the look on my dad's face as complete hurt that I had done this," she says recalling the event. "I never wanted to hurt him that way again."

Part of Community
Cummings-Morford says she learned quickly that medical marijuana users face stigma as drug users that someone on say OxyContin would not face. An athlete and cheerleader in high school, some childhood friends no longer speak to her. "I'm looked at as a drug user," she says. "I'm a patient. I'm a wife. I'm a student, and most importantly, I am part of this community. The law does not protect those with a prescription for medical marijuana from being fired for failing a drug test, and insurance companies won't pay for the medicine. As of May 2014, 952 Lincoln County residents held OMMP cards. "If all 952 of us stood in front of you, you'd be surprised at who you know," Cummings-Morford says.

Outspoken Advocate
Far from hiding her status, today she is an outspoken advocate for medical marijuana patients. She has testified several times in front of the Lincoln County Board of Commissioners about its decision to ban medical marijuana dispensaries until at least May 1 of 2015. Cummings-Morford, who lives outside of Toledo, wants commissioners to lift the ban to allow the Going Green medical marijuana dispensary on Olalla Road to open. For now, she says other local dispensaries do not have a reliable supply of tinctures such as she uses and other forms of the drug – meaning trips to the Willamette Valley for medicine. Many patients have disabilities that make traveling difficult, she says. Cummings-Morford herself no longer drives after losing most of the peripheral vision in her left eye–that a specialist believes might be an early sign of multiple sclerosis and the cause of her vomiting episodes.

"I just want people to understand a lot of us are here and we're begging for help," she says. Commissioner Terry Thompson coached her in high school track and she knows Commissioner Bill Hall as well. "I was hoping they would see someone in their life who is effected by this," she says. "What upset me the most was nobody asked the 952 patients what we thought. Nobody asked the community what it wants. The way I look at it, my county commissioners turned their back on me."

No Joking Matter
Cummings-Morford earned the ire of former Lincoln County District Attorney Rob Bovett after she posted on YouTube a video of a medical marijuana presentation he made at a Newport Chamber of Commerce luncheon. Cummings-Morford took exception of a clip Bovett played from the television show "Two and a Half Men" that mocked medical marijuana as a legal way to get high.

While it drew chuckles from the studio audience and the luncheon attendees, Cummings-Morford wasn't laughing and stood to speak to the chamber crowd and Bovett. "I want you to think about the cancer patient laying in bed," she said. "I want you to think of the 6-year-old girl with epilepsy seizures that you are laughing at. That you find a joke." When respected public figures such as Bovett make light of medical marijuana, it gives people a bad impression of the program, she says. A passionate advocate for the medical benefits of marijuana, Cummings-Morford also agrees with Bovett on the need for better background checks on all dispensary employees.

A Calling
Cummings-Morford can quickly run down the various chemical elements in marijuana such as THC, CBD, CBG and their medical uses. Her experiences over the past year have left her convinced her calling is to advocate on behalf of medical marijuana patients and perhaps own her own dispensary in the future. "The medical marijuana industry is something I really want to be a part of because it's something I can help people with and it's something that every day I'm involved with it I feel good about myself," she said. 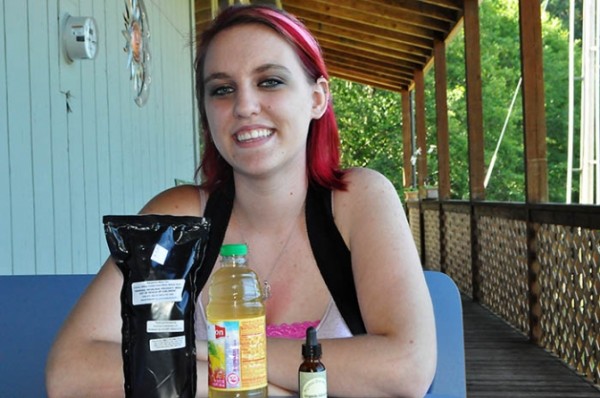