The lead proponent of a Long Beach medical marijuana initiative has switched his support to a competing measure whose backers are seeking to place the question of legalizing dispensaries on the November ballot.

Medical marijuana advocate Larry King, who until Tuesday was aligned with the Long Beach Patients Access PAC's effort to qualify a medical marijuana initiative for the November ballot, said in a telephone interview Tuesday that he sees the Long Beach Collective Association's alternative measure as offering a better balance between the interests of cannabis providers and Long Beach's neighborhood associations.

"We've invited them to come on board," King said in reference to the Long Beach Patients Access PAC. "I believe the other initiative has a much better chance of passing."

The lead proponent of the new measure is Bob Kelton, a 60-year-old Long Beach resident, who said cannabis helped him survive cancer in 2010.

"It provided quite a bit of relief and helped me keep up my treatment," he said Tuesday.

Long Beach City Clerk Maria de la Luz Garcia confirmed city officials are processing Kelton's measure for possible appearance on a future ballot and that King requested her office stop processing the ballot measure he had previously supported. The Long Beach Patients Access PAC, however, is not abandoning its support for its preferred measure.

Jason Aula, a political strategist for that group, said Tuesday that another proponent may refile its version of a prospective ballot measure within days.

King, who served on Long Beach's special citizens cannabis task force during its ill-fated effort to help the City Council write a law regulating medical marijuana dispensaries, said key differences between the two measures include limits on the maximum number of dispensaries that may be allowed to operate in Long Beach and stronger requirements related to where dispensaries may be located.

The Long Beach Collectives Association's measure would tie the maximum allowable number of dispensaries to the city's population, and King said the calculation would at this point allow roughly 30 dispensaries in Long Beach.

The measure supported by the Long Beach Patients Access, by contrast, would have no limits.

The Long Beach Collective Association's version would require a 1,000-foot buffer between dispensaries and schools.

The Long Beach Patients Access PAC's measure, by comparison, would mandate a 600-foot buffer between dispensaries and schools.

Long Beach has generally banned medical marijuana dispensaries since 2012, and the City Council has essentially placed the question of whether the city should change that law into the hands of voters.

King said that even with the prospect of a policy change at the state level, it's worthwhile to pursue a ballot measure at the local level. If a local measure passes in Long Beach, the city's policy makers would be bound to the will of the voters.

Long Beach Collective Association board member Adam Hijazi said the group is working to get its supported measure on the November ballot. 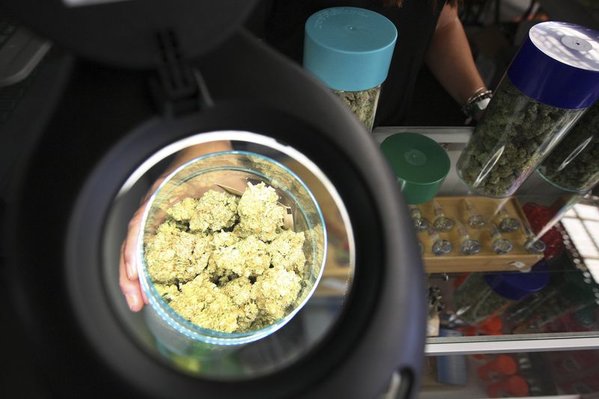