A medical marijuana ordinance recommendation from a city committee has been delayed again.

The committee had been expected to make a recommendation to go before the City Council just after the committee meeting.

But two committee members, Daniel Greer and Laura Dwyer Schlecte, said they wanted the time to do more research. The committee will meet again next Tuesday at 2 p.m. in the council chambers at City Hall.

The committee has discussed two versions of the proposed ordinance.

One version would allow qualifying patients and primary caregivers to use and grow marijuana only at their homes, while another would allow growth at certain non-dwelling locations in commercial and industrial business districts.
The patient and caregiver would have to be registered with the Michigan Department of Community Health to grow marijuana, according to the ordinance.
Among other things, the proposed ordinance would ban medical marijuana dispensaries that provide pot to patients, essentially requiring patients to either grow marijuana themselves or get it from a registered primary caregiver.

A state law approved by voters in 2008 allows people to use marijuana for medicinal purposes.

Since then, many communities have considered local regulations. The Jackson City Council issued a moratorium on any new medical marijuana establishments while the proposed ordinance was being drafted. 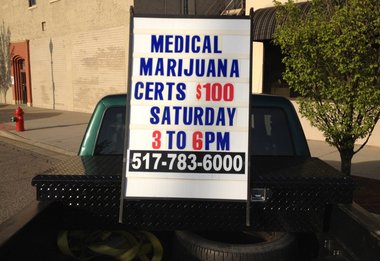