Proposed rules for Maryland's nascent medical marijuana system are drawing objections from a leading advocate, who says the regulations could discourage doctors from participating. Del. Dan K. Morhaim, one of the chief sponsors of the legislation, criticized the draft regulations for requiring training and continued education in the medical use of marijuana for physicians who want to help their patients access the drug. "Please don't create any barriers for physicians," Morhaim, a Baltimore County Democrat and the General Assembly's only physician, told the state's Medical Marijuana Commission at a hearing this week.

Morhaim warned that requiring continuing medical education could deter doctors because, he said, courses on marijuana are not readily available. He also questioned the need for doctors to take periodic courses on marijuana when they don't have to do so for more dangerous drugs they prescribe. "Physicians are professionals and can and do make determinations of what they need to know before giving medicines to patients," Morhaim said.

Morhaim and others are also raising concerns that the proposed rules would expose physicians to prosecution by the federal government, which continues to treat marijuana as a dangerous drug with no medical exceptions. The commission is working to finish draft regulations that could determine the success or failure of Maryland's second effort to allow the distribution of marijuana for medical purposes.

The commission this week released its initial version of proposed rules for physicians in the program. Last month, the panel circulated a similar set of rules for prospective growers of legal medical marijuana. So far, the commission's efforts are receiving mixed but largely positive reviews. "I think they're doing an exceptional job on this first attempt," said Michael Liszewski, government affairs director of Americans for Safe Access, a national organization that backs the use of marijuana for medical purposes.

For both the doctors and growers, the commission published its draft rules so it could get feedback from people and organizations with a stake in how the Maryland's new medical marijuana system is structured. Advocates say they want to avoid a repetition of Maryland's first attempt to set up a medical marijuana system last year, when the General Assembly passed legislation so restrictive that not a single patient in Maryland was able to legally obtain the drug. That law restricted medical marijuana distribution to the state's academic medical centers, none of which were interested in participating.

This year's version of the law removes that barrier and expands the authority to recommend medical marijuana to virtually any licensed physician. It also creates licenses for up to 15 state-approved growers and establishes the framework of a distribution network. While the legislature created the broad parameters of the program, it left many of the details to a commission with much broader powers than it had under the previous statute. With its draft proposals for physicians and growers already circulating, the panel plans to float its ideas over the next several weeks for regulating marijuana distributors, providing ID cards for qualifying patients and conducting inspections of licensed facilities, said acting executive director Sharon H. Bloom.

The unpaid, governor-appointed commission must deliver its final draft regulations to the state health department by Sept. 15. After the department's secretary signs off on final proposed regulations, they will go to a joint House-Senate committee for comment before taking effect. Proponents hope to begin providing qualifying patients with Maryland-based cannabis products by early 2016. Before passing this year's legislation, lawmakers heard extensive testimony on the potential for marijuana to alleviate symptoms of epilepsy, cancer chemotherapy, auto-immune diseases, post-traumatic stress disorder and other serious medical conditions. Maryland is one of 23 states and the District of Columbia to have passed laws to allow use of the drug for medical purposes.

One of the big differences between this year's law and 2013's is that any doctor who is licensed to prescribe controlled substances can apply to the commission for a permit to recommend marijuana for patients with a valid medical need. The patients would be issued state ID cards that will let them buy marijuana from licensed outlets. Under the proposed rules, doctors would recommend the precise strain and dosage of the cannabis products. They would also be required to take an approved orientation course in the marijuana program as well as whatever continuing medical education courses the commission might adopt.

Advocates see problems.
"A number of the proposed regulations are either onerous or require illegal action on behalf of physicians," said Rachelle Yeung, legislative analyst for the Marijuana Policy Project. Yeung explained that under a Supreme Court decision, physicians have a First Amendment right to "recommend" marijuana to patients but are forbidden under federal law to "prescribe" a substance that is still classified as a Schedule 1 drug, along with heroin and cocaine. To avoid getting participating physicians in trouble, she noted, the law avoids the word "prescribe." But by leaving it to the physician to specify the strain and dosage, Yeung said, the regulations could put doctors in danger of federal prosecution. She said it would make sense to leave the job of matching patients with specific strains of marijuana up to dispensaries.

Commission chairman Dr. Paul Davies said he was not sure it would be a problem because other states with medical marijuana programs have dealt with the same issue. Gene M. Ransom III, chief executive officer of MedChi, the state medical society, agreed that the regulations should place as few barriers to physician participation as possible. However, he said he does not see the proposed continuing education rules as onerous and added that MedChi is working to develop marijuana courses it can certify.

Baltimore County State's Attorney Scott Shellenberger, a medical marijuana skeptic who opposed the legislation when it was first proposed, said he's encouraged by what he called "stringent" draft rules on growers and doctors. He praised the requirements that physicians spell out their criteria for recommending the drug. "It does seem on physicians as if efforts are being made to make sure we're dealing with a legitimate medical condition," he said. The proposed regulations on growers have received a more broadly positive response.

Mike McCarthy, a longtime horticulture industry executive who has formed a company called Medijuana MD LLC to compete for a growers' license, said he'd like to see some tweaks to the proposed rules. For instance, he sees no reason for a provision limiting each grower to cultivating one strain of cannabis. But overall he's satisfied and optimistic. "We were pleased with what they've put forward so far," he said.

Davies, an Annapolis pain management specialist, said the commission is committed to making medical marijuana available as quickly as possible in a way that neither limits its use unnecessarily nor a "Wild West" marketplace. He said the panel will study the comments it receives and make changes where necessary. "I'm very, very optimistic that we're going to have a great program in the state of Maryland," he said. 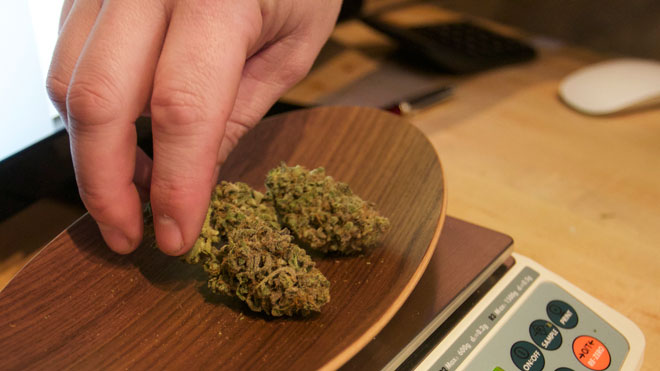