Boulder has turned over a new leaf -- and smoked it.

Wednesday's marijuana smoke-out perhaps has new clout with the proliferation of marijuana dispensaries and a Playboy ranking that names the University of Colorado as the top party school, partly because of its unofficial 4/20 gathering on the Norlin Quad.

Last year, a crowd numbering about 10,000 gathered on the quad for the pot smokers' rally, lighting up their bongs, blunts and pipes for a communal smoke at 4:20 p.m.

"This is an event that we inherit by virtue of being a public space and publicly accessible campus," he said. "It's an event that's imposed upon us. We don't welcome it. We don't encourage it. We don't like it. But we are obligated to create as safe of a situation as we can."

Hilliard estimated that 20 to 25 percent of participants in the 4/20 gathering are CU students.

The event draws people to smoke pot, protest drug laws and take part in a massive lawn party. Hilliard said, though, that the state Capitol -- not a college campus -- would be a more appropriate place to protest.

Holly "G" Conrad, 26, will be coming up from Denver to participate in the smoke-out. Conrad said she's had her medical marijuana license for six years, which allows her access to the herbal alternative to pharmaceutical drugs. She said that since she's been using marijuana to treat her pain from multiple sclerosis, she's been able to be more physically active.

"I'm going to meet up with a bunch of like-minded people and get together and stand up in front of Boulder and say that we want cannabis legal," she said. "It's changed my life. That's why I'm such a big activist for it. I stand up on 4/20 as a symbol that it should be legal."

Conrad said she's been to Denver's 4/20 gatherings, but she prefers the event in Boulder and said it's a more comfortable setting.

Over the years, officials have tried different strategies to snuff out the gathering on the Boulder campus. They've turned on the sprinklers. They've sent students into the crowd

to take photos of pot smokers, then posted them online and paid people who could identify them. They've even tried putting down a fertilizer that smelled like fish, but it didn't deter crowds.

Over the years, groups including campus and student leaders and law enforcement officials have consistently met to brainstorm strategies for handling the large gathering.

CU Police Cmdr. Tim McGraw said possession of less than 2 ounces of marijuana is a petty offense that carries a maximum $100 fine and is not an arrestable crime.

"It affords us little statutory authority to deal with this event," McGraw said. "That doesn't mean police officers won't be issuing summons. People can't be walking around thinking that they have carte blanche to disregard Colorado statutes."

In comparison, littering two pieces of trash can carry a $1,000 fine.

Few tickets have been issued at the event, though people smoking marijuana on the campus before or after the communal 4:20 p.m. puff have been more likely to be ticketed.

Authorities are also warning people not to bring trampolines, furniture or slacklining equipment to the event.

Three CU students -- George Atabaev, John Garay and JR Amato -- are capitalizing on the cannabis culture this year with T-shirts they've made that show CU's mascot smoking pot, with a caption that says, "Buff, Buff, Pass."

"We just figured it's a big event, and a lot of people would buy them," Atabaev said.

They also sold T-shirts prior to CU's black-out football game that said, "We black out."

CU music student Lee Wren attended the event last year -- not to smoke weed, but to record a song called "Boulder Baked," which is about rolling joints, eating brownies and getting high. He played the trumpet and sang while a friend of his, who is a film studies student, recorded the video -- which features people smoking at what looks like a giant lawn party complete with a beach ball, a cannabis flag, headstands and dancing.

"I think it's harmless and entertaining -- and a little bit annoying," Wren said of the gathering. "There's a lot of interesting things going on that don't necessarily have to do with weed. It's a strange scene."

Weather tends to affect the size of the crowd, and the forecast calls for Wednesday to be in the mid-50s, cloudy with a chance of rain showers. 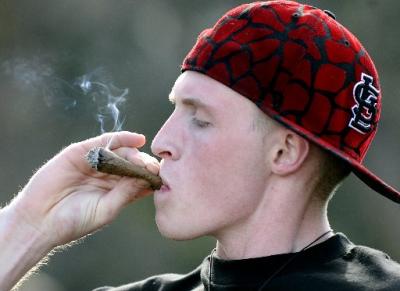