At its meeting on Monday evening, the Globe City Council held a 1-hour, 50-minute public hearing regarding Globe Farmacy's request to transfer a conditional use permit for a medical marijuana growing facility from 200 W. Ash St. to 171 W. Mesquite St.

The council had in February, 2011 approved Globe Farmacy, a non-profit organization, to house a medical marijuana growing facility at 200 W. Ash St. and a dispensary at 200 N. Broad St., kitty corner to Hollis Cinemas 4. However, Globe Farmacy hadn't been able to finalize a purchase or lease of the building at 200 W. Ash St., and therefore needed a new building to house the growing facility. The location at 171 W. Mesquite St., the parking garage area of the newer portion of the old Elks building (below Globe Antique Mall), was chosen mainly for its close proximity to the police and fire departments.

The Globe Planning and Zoning Commission held a public hearing about the issue on Thursday; see Page A7 for complete coverage of that meeting. The Commission made a motion to pass the Globe Farmacy's request, but there was no second and the motion died.

So in effect, the Commission did not make a recommendation to the council regarding the matter.

The council did not take action Monday, but agreed to put the matter on next week's agenda.

No less than 14 members of the public spoke during the public hearing. Comments were limited to three minutes. First up was Roger Dowling, owner of the Globe Antique Mall, who voiced his support for the new location. Globe Fire Marshal Joe Bracamonte assured the council that the facility would exceed all city fire codes.

"It would be one of the safest facilities in town," Bracamonte said.

The Huddle bartender Kat Esparza went first, reading a message from The Huddle owner Tracy Quick. Quick worried that the growing facility would "put us completely out of business" and drive down property values in the downtown area. She also had concerns about "big brother" and "heavy police patrols" that could affect her customers.

Globe Police Chief Lee Kinnard answered that the facility's exterior security cameras would be focused strictly on the facility itself, and not on surrounding businesses.

"We will be able to inspect the building anytime we need to," Kinnard said. "We need to put something in place to control (medical marijuana). I spent four and a half years as a narcotics detective trying to get rid of the stuff, but the people voted for it."

David Cook criticized the prior version of the city council for a "lack of leadership in the past." He said he didn't have a problem with medical marijuana, but that the facilities should either by other medical facilities or somewhere else away from downtown. He also made a comment about "illegals growing marijuana in the fields" and claimed that a Silver Belt editorial said marijuana "makes you want to kick back and relax."

Councilwoman Mary Ann Uhl tried to assuage fears that the exterior of the building would be dramatically altered.

"The exterior of the building will not change," she said. "I don't think people will even know it's there."

"We run a highly respectable business, and this is not right to me," Hughes said. "Our ancestors are rolling over in their graves right now."

Globe Farmacy President Ken Sobel addressed the council and members of the public. He said that no other city had the foresight to put out a Request for Proposals for a medical marijuana business like Globe did. Sobel added that there will be an extra 3-percent tax on medical marijuana that will go directly to the city.

"We just ask you to be fair," Sobel said to the council. "We look forward to being a part of this community."

Murray Stein, a member of the Globe Farmacy board of directors, talked about the "dozens" of new jobs that Globe Farmacy would create for the city.

"We want to make a difference in this community," Stein said. "We're not pursuing the stoner culture. We have to track every gram (of medical marijuana), from seed to sale."

Wendy Stanfel expressed concern about the "perception" that Globe would have with a medical marijuana presence downtown, and also with safety issues, saying "the risk is too great." Cheryl Brazell, owner of Past Times Antiques, directly across Mesquite from the proposed new location, said "my husband I welcome security. We've been broken into during the night while we were sleeping. And we welcome jobs. As long as they're held accountable, we don't have a problem."

Jennifer Hicklin worried about the odor that the growing facility could give off, while local business owner Russell Hughes said the only reason Globe Farmacy wants to change buildings is because the Mesquite location is cheaper.

Mayor Terry Wheeler said the growing facility would "attract criminal activities and create a hazard. I don't believe it belongs in the downtown area."

Councilman James Haley said a medical marijuana growing facility is "not congruent" with what's in the area, and that he is "leaning toward objecting" Globe Farmacy's request. He also said the council should wait to vote on the matter until the city has an attorney, which could be another three to four weeks.

Councilman Desmond Baker started a mini uproar when said, "I'm a little bit shocked. We have a company trying to start a legitimate business, and it's like we're harassing them."

Sarah Bernstein wanted to know what Baker's relationship was with Globe Farmacy. Baker explained that he had answered the RFP, and that after Globe Farmacy won the bid, he was in talks to be the on-site manager for Globe Farmacy. "That didn't come to fruition," Baker said. "I don't have any association with them."

Globe Fire Chief Al Gameros said the Mesquite location would be "a lot safer for fire protection ... if the state hadn't delayed making a decision on medical marijuana, we'd already have a growing facility here, and in a much more visible place." 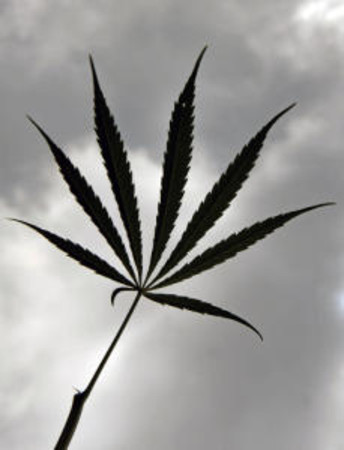