Juan Lopez got his, a little extra product to say "thanks for voting." "It's definitely a good idea to get people to vote," Lopez said, sticking the joint behind his ear. "Offers like this don't happen all the time." No doubt Lopez is correct. But, if the so-called "weed for votes" plan works, expect to see it on future election days. California Medical Marijuana Association Vice President Xak Puckett said says the incentive idea was part brainstorm, part social media campaign. "The great thing about San Jose is, we're pioneers for medical marijuana," Puckett said, "and marijuana in general."

The San Jose City Council is considering a proposed ordinance to closely oversee medicinal marijuana collectives and cultivation in a city with 78 collectives operating illegally. The unlawful pot businesses continue to exist since the repeal of a law governing them in 2012. The city did not have enough funds for enforcement to close them down, Mayor Chuck Reed's spokeswoman Michelle McGurk said. The Silicon Valley Cannabis Coalition posted a list of their recommendations for candidates in San Jose who they believe "will take a reasonable approach to regulating cannabis clubs," founder of the All American Cannabis Club and SVCC member Dave Hodges said in a statement.

A list of clubs participating in the "Weed for Votes" program was posted on SVCannabis.org. When asked for comment, the Santa Clara County District Attorney's office said this kind of thing is not illegal, at least not for a local election. Amsterdam's Garden management says they'll likely incentivize voters during future elections as well. 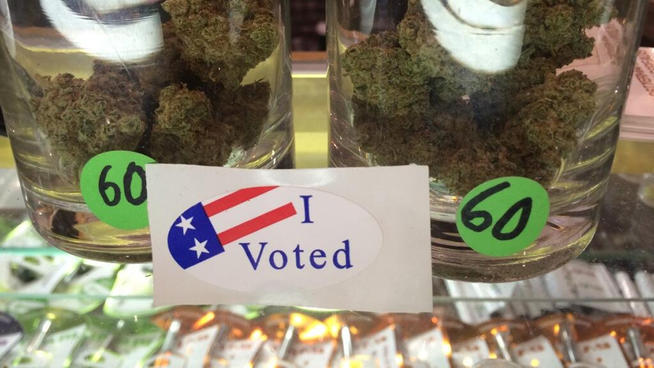