Since the current grow is/was still underway, had to start the new batch in a homemade ebb and flow system with fluoro lighting all mounted inside of an old baker's rack. 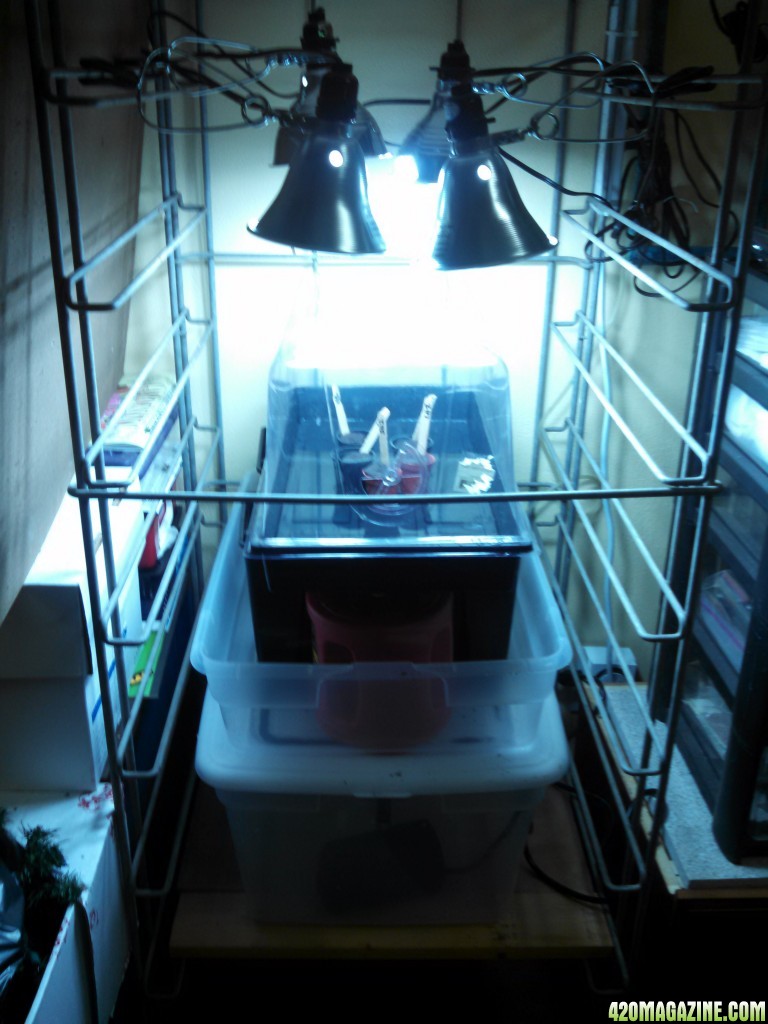 Got the seedlings into the growing medium tonight and filled the reservoir with 5 gallons of rainwater that with the following Cutting Edge Solutions mixture: 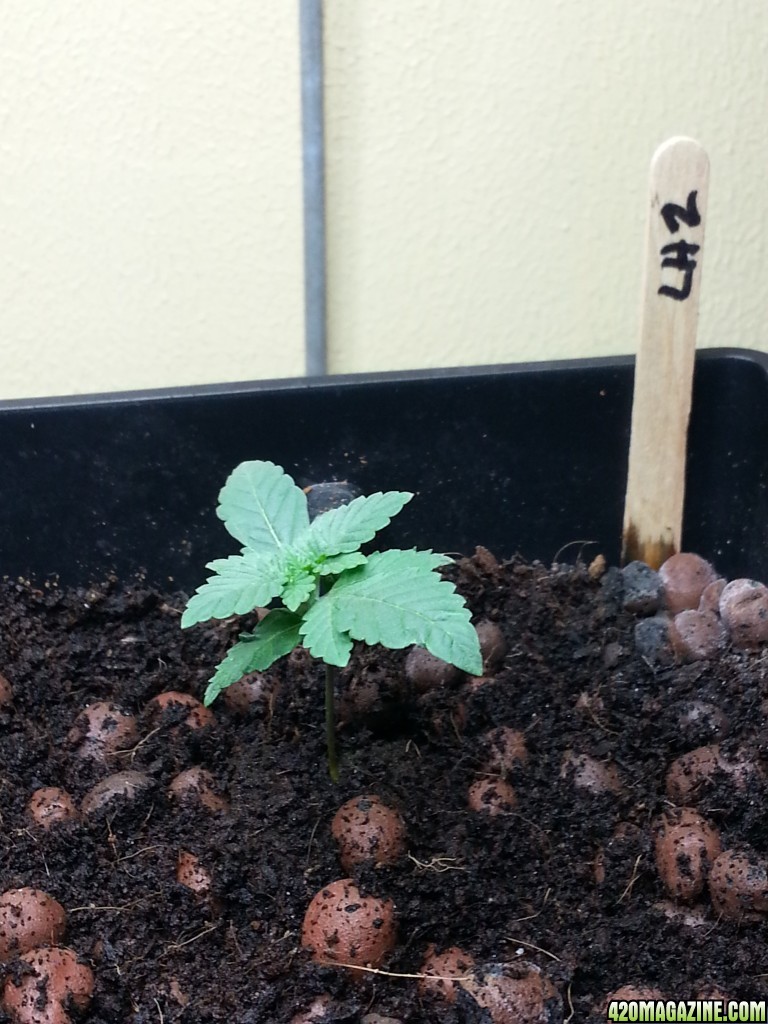 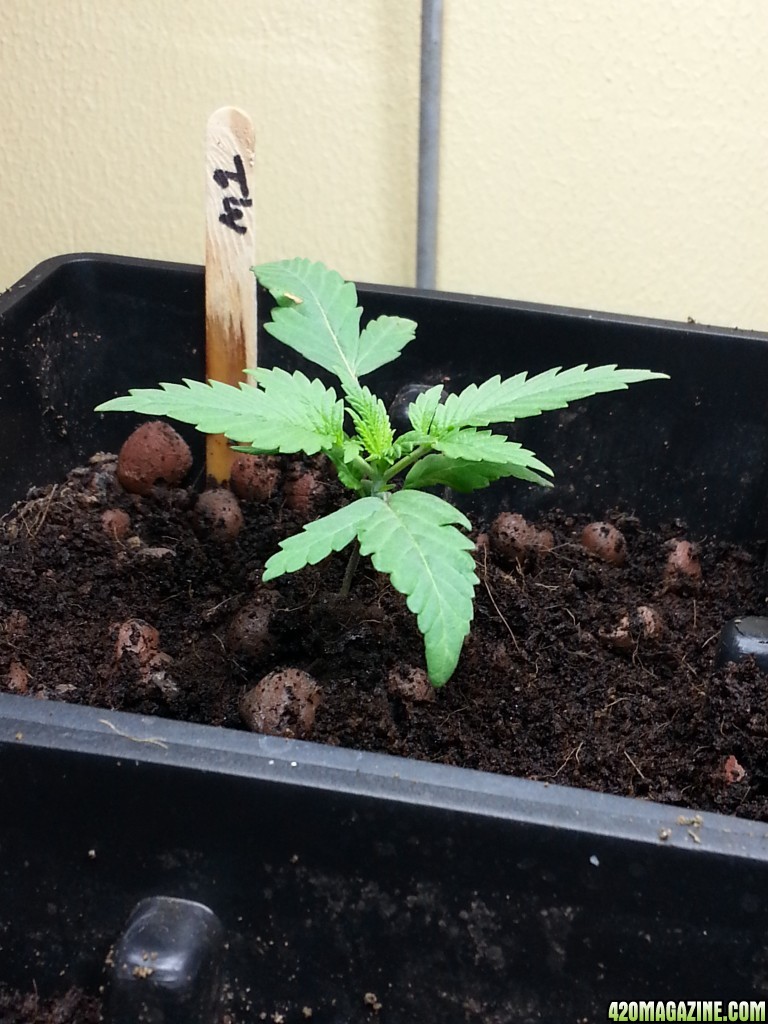 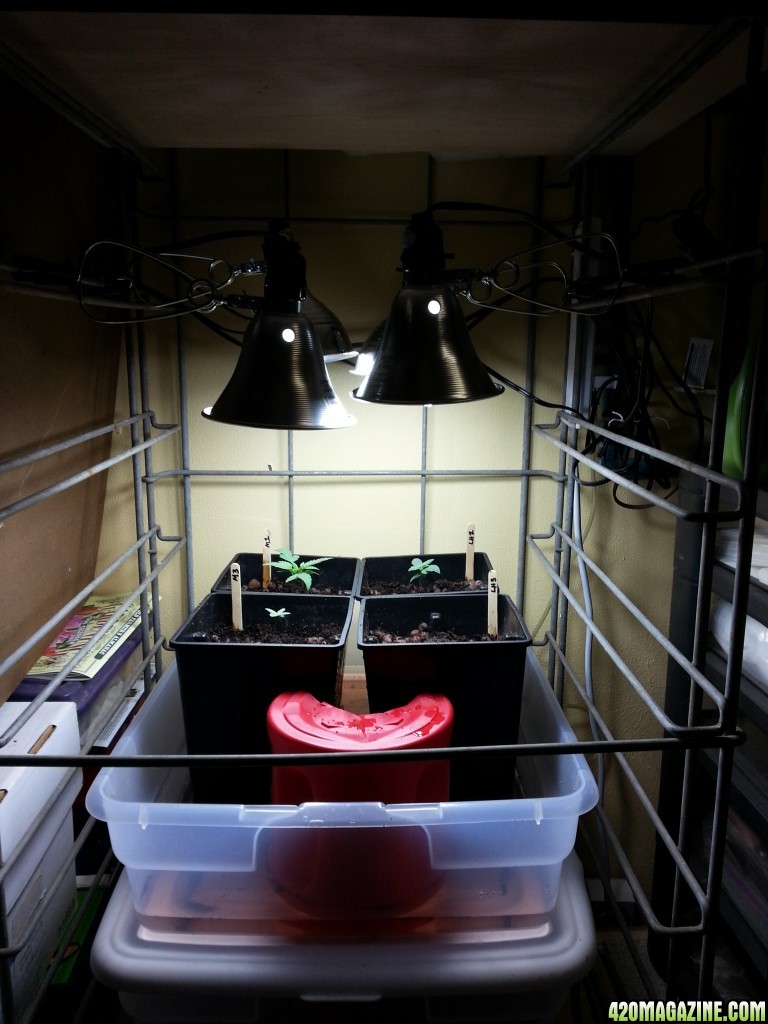 An observation from my switch to Rapid Rooter plugs over Rockwool Cubes:

Although both tended to get some algae on them due to the warmth in the room and the fact that the water they sit in is not aerated enough. the Rapid Rooter plugs allowed for MUCH more vigorous root growth than the Rockwool Cubes. Just in the week and a half since germination I had roots growing out of the plugs and extended a good few inches each. It made for some careful effort to get them safely out of the little plastic pots I had them started in, but I think from now on I will be going Rapid Rooter all the way!

Another observation... even in the drier second room, this ebb and flow system does not evaporate near as much as the more open system in the main grow room. If I knew that I would have never purchased the VersaGrow and just built a larger version of this one. Not that I am complaining about the VersaGrow since I love the set up and the ease of access.. just in our environment it tends to go through a lot more water due to more surface area being exposed to the drier air!

Quick pic of the progress so far...

Taken a week since the last pics posted.. great growth so far! 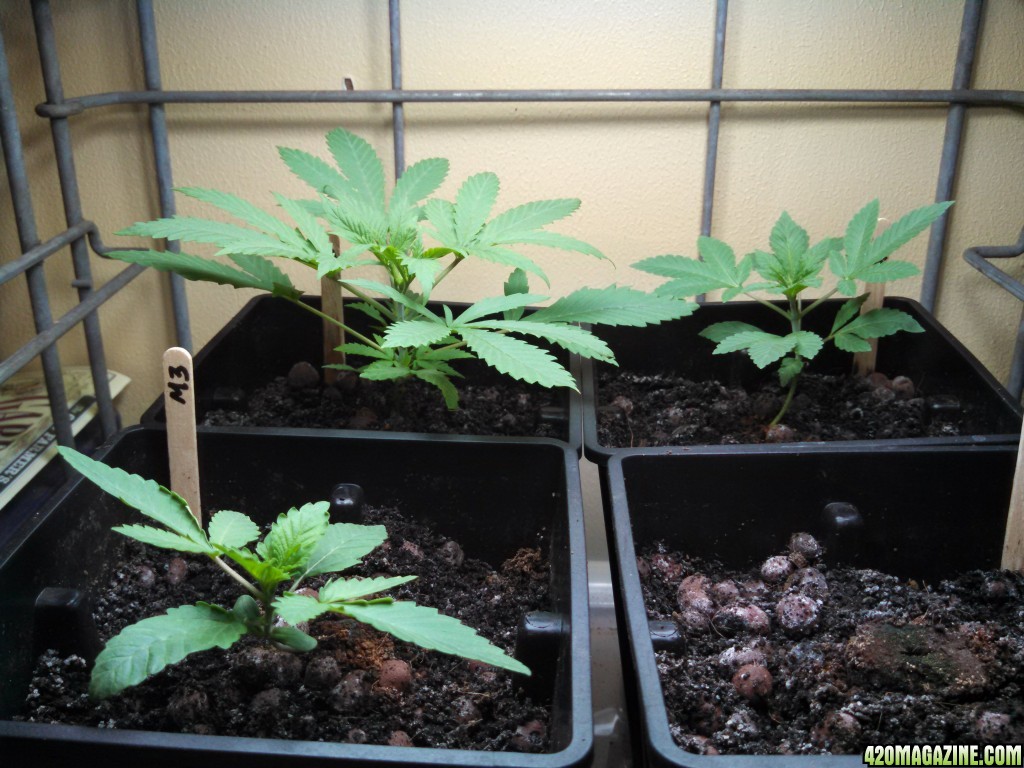 We just got back from our trip and this is what greeted me when I checked on the new batch of girls:

This pic was taken SIX days after the above pics!! 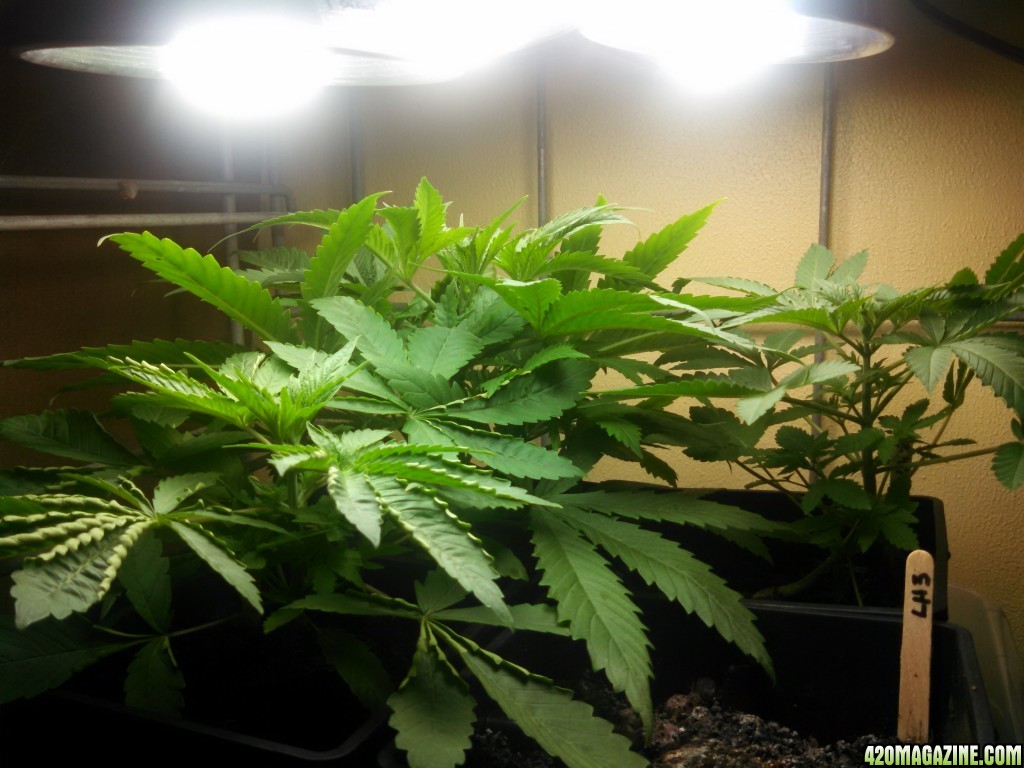 The jury is still out as to whether it is the new system I built, or the nutrients... but I am betting on the nutrients being the difference. We even have a ton of root growth out of the containers already that NEVER really happened in the old grow at all. My wife took pictures of the roots.. so as soon as she takes them off her phone I will upload pics of those as well. 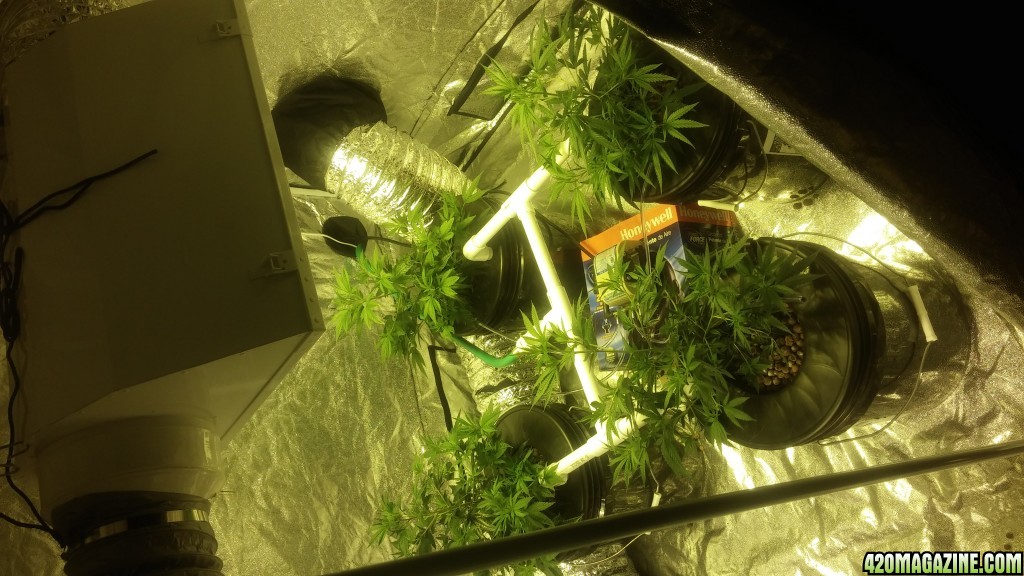 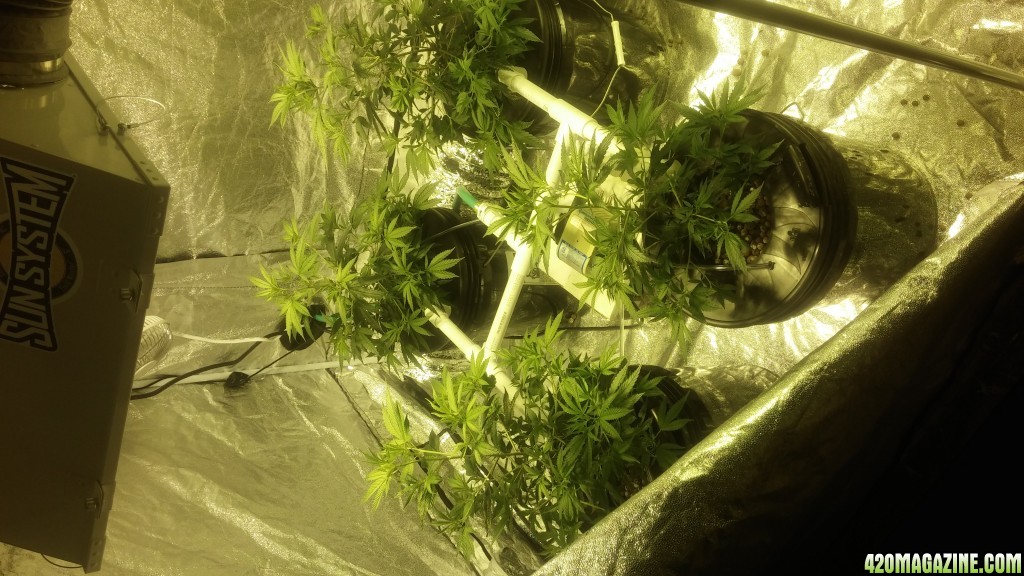 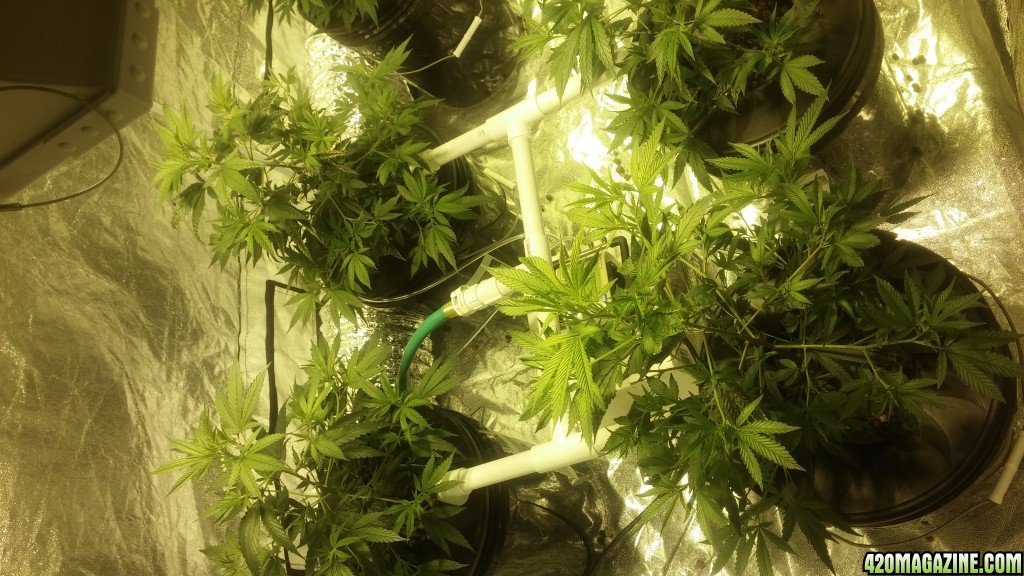 Hey megebuds following your grow and just thought I'd show you my Lemon haze clones so far after 3 and a half weeks in dwc. They grow up so fast. Beautiful plants. Are they feminized seeds?

The local grower we got them from did not say if they were or not... he just tossed us a bunch of different seeds so we were not going to complain :icon_cool

Love the setup you have there!!

Thanks man. Everyone says if your a noob start in soil, but I dove straight into dwc and its fairly easy to manage. I couldn't ask for better growth. I figure since we are both growing lemon haze it be nice to compare our grows and final product.

I think as long as you are the type of person that pays attention to the details that most of this stuff should not be too far of a stretch to grasp and soon enough master.
COMPLETE: MegeBudz First Grow - Started with T12 Fluoros and Finishing off with LED
COMPLETE: MegeBudz - Lemon Haze and Miscellaneous - Fluro to LED - Cutting Edge Solution Nutes

Well the new kids have been moved into the official grow room and under the TopLED lights.

Here are a couple pics the night I loved them in: 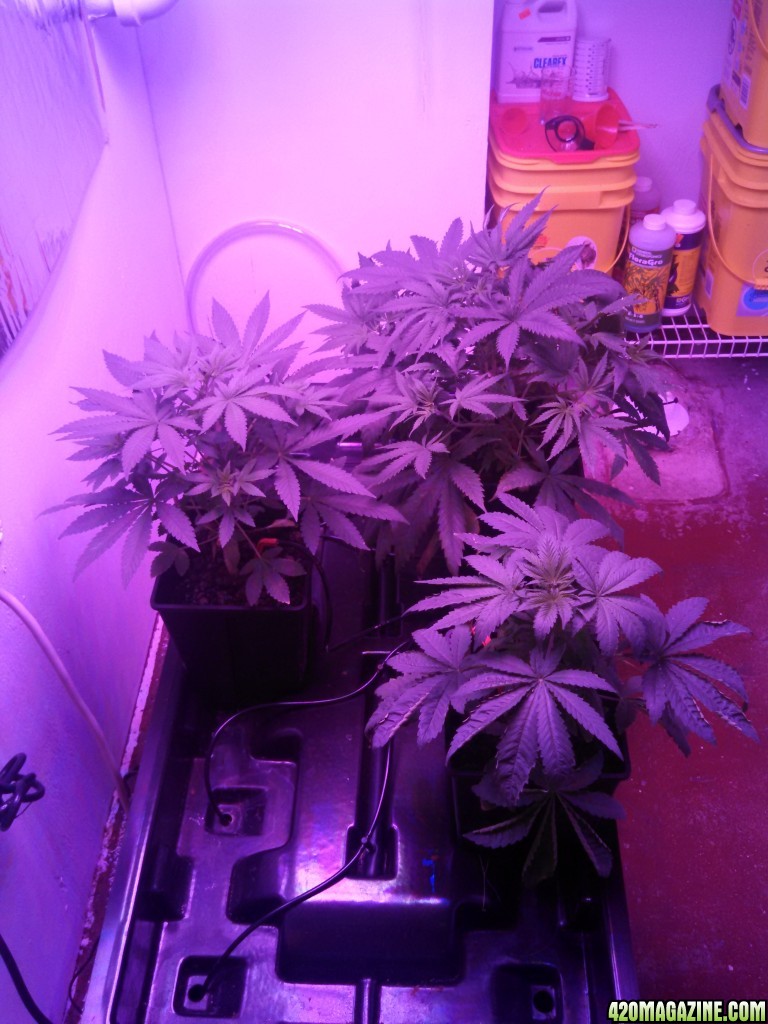 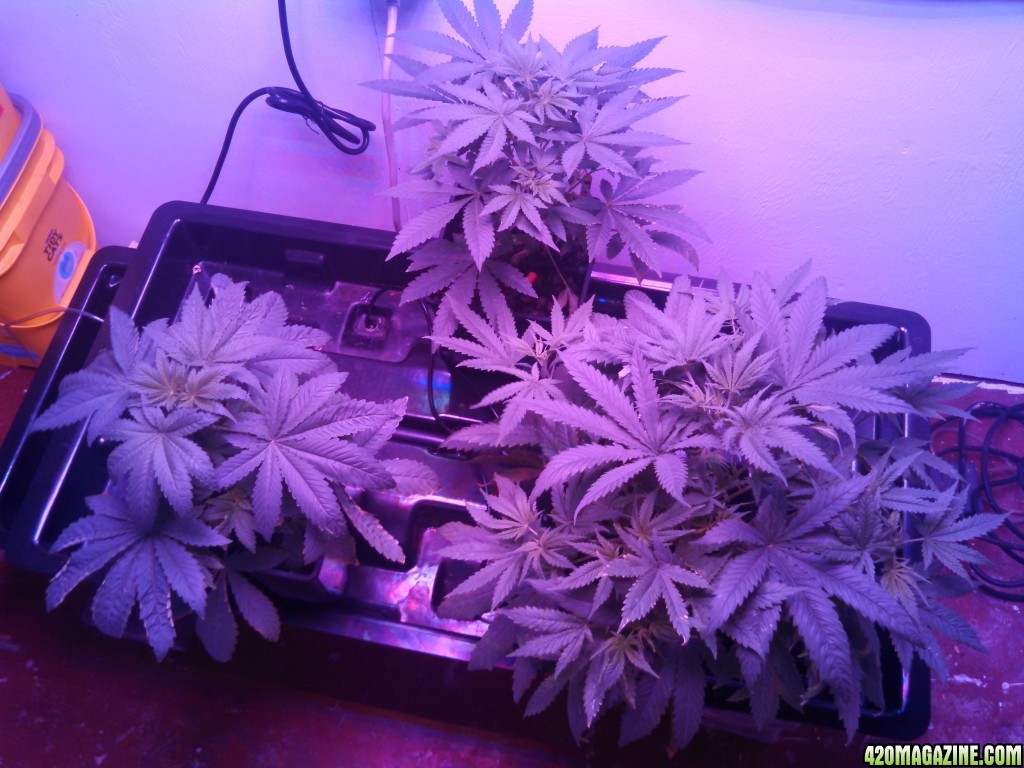 And then this pic I just took yesterday.. complete with my freshly installed swamp cooler to try and keep the temps down in there. 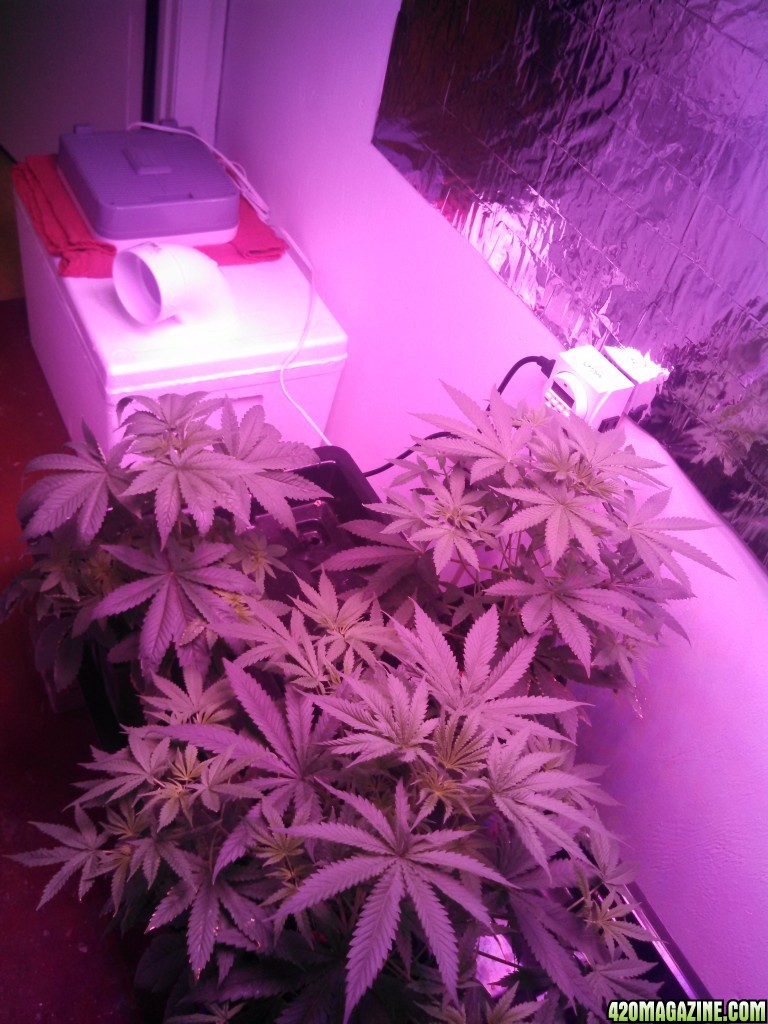 Nice. Are you going to transplant or leave em? Looks like the plants are going to out grow the pots.

The last batch never outgrew the pots so I had not planned on transplanting these either... however since these are a different strain I may end up having to.

Yea lemon haze seems to stretch I'll upload some new pics of mine later tonight its only been 5 weeks but they are HUGE and the roots are unbelievable. Its like a forest. I'm 2 weeks into flower and Thursday was day 1 of week 3 flower (day 1 of 6 weeks total) and I still have 8 weeks to go. But they already have this amazing sweet smell. I think the Raw Sweet I'm adding is doing that. My only issue is white flies. Not a lot but I'm thinking of throwing some lady bugs in there. :/. Overall your plants look lovely I'm courios to see how the LED will work. I've was always hesitant to try.

I tried pesticides before and it killed my plants. All organic too like neem oil. So I don't trust it. I'm buying ladybugs soon and that seems like the most safe way and natural too. Sprays give me headaches
K 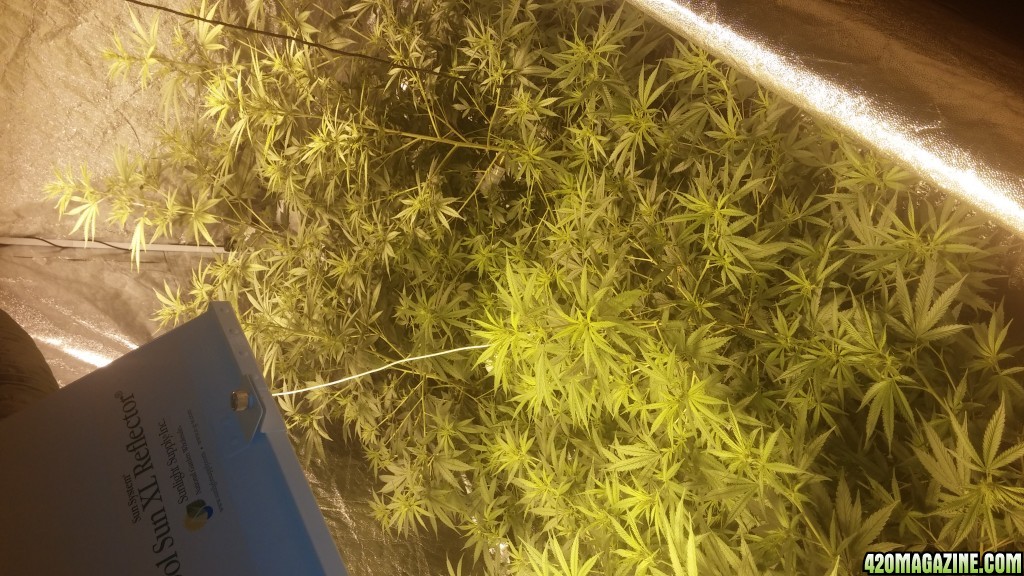 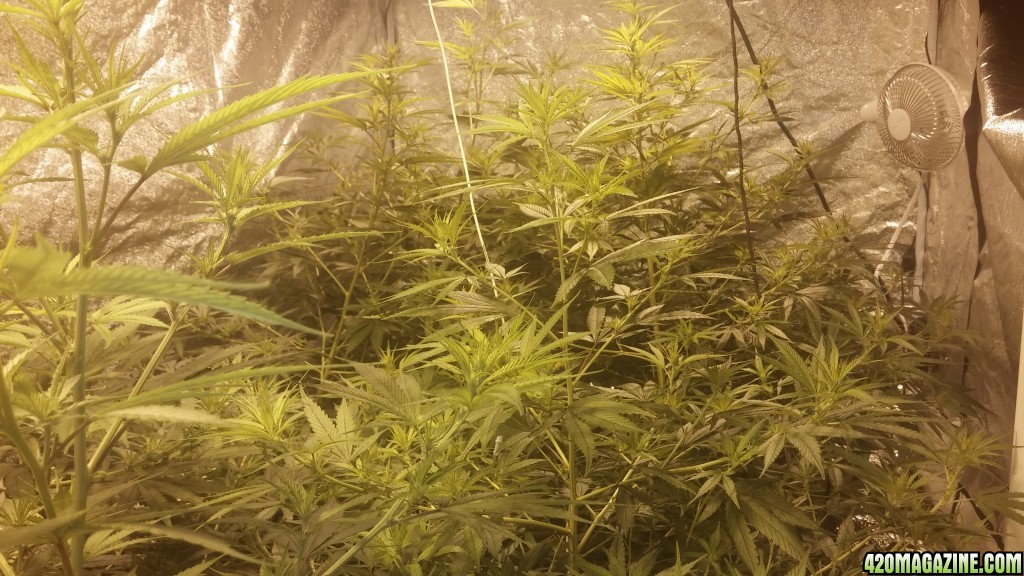 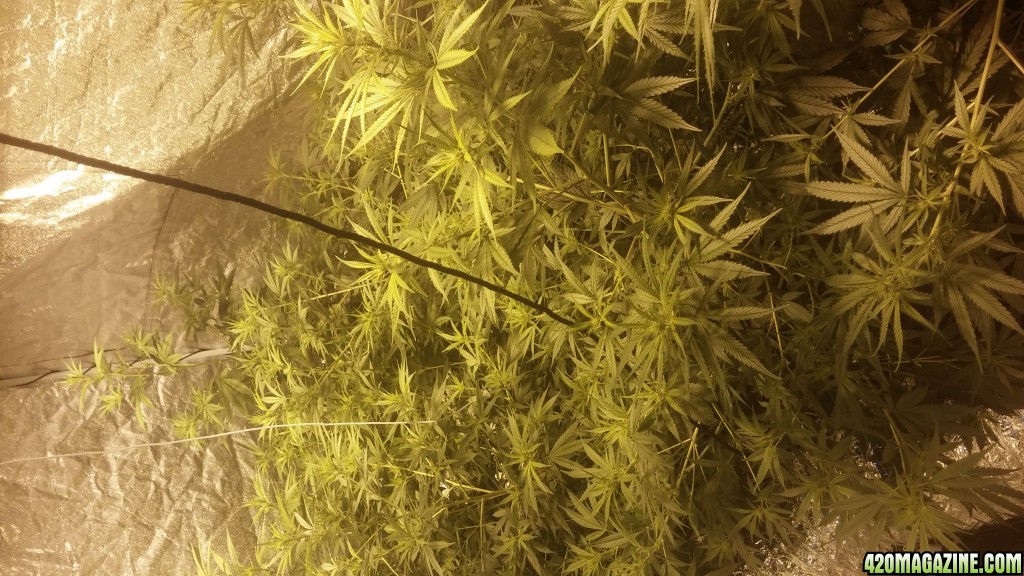 KushPharoah you should look into newer organic pesticides such as Sierra Natural Sciences, many 420 Magazine members have used their products with good results. I would always suggest having a good pesticide on hand in case insects are detected you can quickly handle them before an outbreak is reached.

good advice KJ. i will definitely get my hands on some for my next grow. Unfortunately my plants hermied. Not 1, ALL! Which makes me realize, clones(if not your own) can't be trusted from out side sources. i can understand 1, but every last one. Well you live and learn no biggie. I wanted to ditch dwc anyways and try my hand at coco coir. 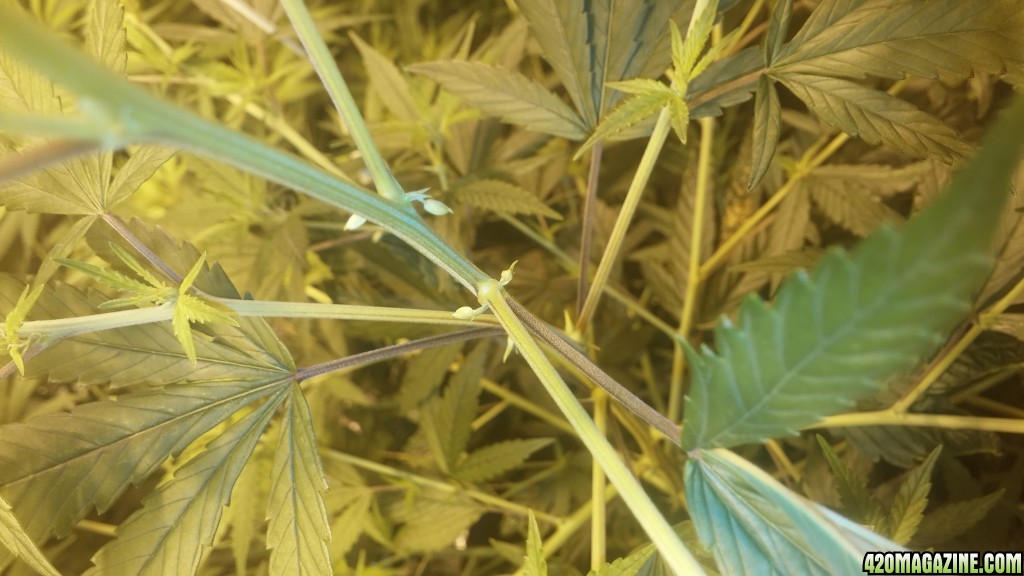 You can clearly see the balls.