Mexican President Hints May Be Open To Change In Marijuana Laws

Mexico and the United States cannot pursue diverging policies on marijuana legalization, Mexican President Enrique Pena Nieto was quoted as saying on Sunday, hinting he may be open to following the lead taken by some U.S. states in changing drug laws. Political pressure has grown in Mexico to take a more liberal stance on marijuana since Washington and Colorado decided to legalize possession and sale of the drug for recreational use in 2012. Other U.S. states plan votes soon. Marijuana, along with contraband like cocaine and crystal meth, has been a major source of income for violent drug cartels responsible for thousands of deaths in Mexico in recent years.

Proponents of reform say legalizing marijuana would both reduce the gangs' economic power and help generate more tax revenue. Pena Nieto says he is in favor of debating the issue despite personal misgivings about legalizing cannabis, and lawmakers say Mexico cannot be out of step for ever with the United States, the principal buyer of illicit drugs that cross the border. In an interview with Spanish newspaper El Pais, Pena Nieto said legalization of marijuana was a "growing phenomenon" and that the policies followed in the last 30 to 40 years had only led to more consumption and more production of drugs. "Therefore it's a failed policy," he told the newspaper.

"It needs to be reviewed. I repeat, I'm not in favor of legalization, this is a personal conviction. But we can't continue on this road of inconsistency between the legalization we've had in some places, particularly in the most important consumer market, the United States, and in Mexico where we continue to criminalize production of marijuana," he added. His comments offered encouragement to supporters of change in Mexico, where polls have for years shown a majority of the population opposes outright legalization of marijuana. Still, an April survey published by the public opinion unit of the lower house of Congress showed 73 percent of Mexicans backed legalizing marijuana for medicinal purposes. In February, Mexico's leftist opposition Party of the Democratic Revolution (PRD) presented an initiative to legalize medical use of marijuana and Fernando Belaunzaran, a PRD congressman pushing the plan, welcomed Pena Nieto's remarks.

Belaunzaran told Reuters the trend of liberalizing marijuana laws in the United States looked irreversible, and said he expected California to back legalizing the drug in 2016. "Once California has permitted recreational marijuana, maintaining the ban in Mexico won't be sustainable," he said. In 2009, Mexico made it legal to carry up to 5 grams (0.18 ounce) of marijuana, 500 milligrams (0.018 ounces) of cocaine and tiny amounts of heroin and methamphetamines. However, advocates of reform say more must be done to cut crime. 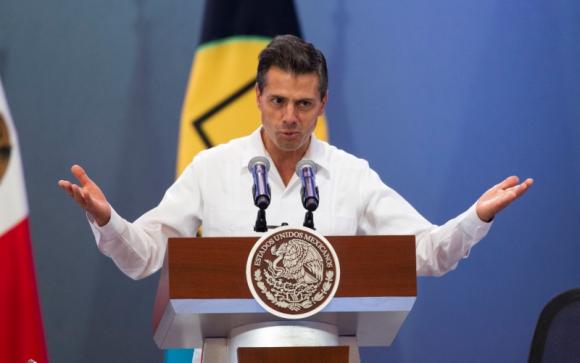 R
Mexico Medical Marijuana Bill Should Pass Congress By May