Almost before the ink was dry, the state's largest nursery is protesting a rule floated by health regulators setting up the framework for Florida's new medical-marijuana industry. Miami-based Costa Farms filed a challenge Monday in the state Division of Administrative Hearings, questioning the proposed use of a lottery to pick five licensees – one in each region of the state – to grow, process and distribute the non-euphoric strains of cannabis legalized by the Legislature and Gov. Rick Scott this spring.

The complaint contends the proposed rule is also invalid because of another component that restricts qualified nurseries to applying only once for a license but allows other entities that partner with nurseries to make multiple applications. "The way the rules are written today, essentially you have given out-of-state actors multiple bites of the apple whereas the nurseries that are the ones that are prescribed in the bill as being the sole obligants only have one shot at it," Costa Farms Vice President Peter Freyre told The News Service of Florida in an interview Monday.

The challenge argues that Florida's new law approving strains of marijuana low in euphoria-inducing tetrahydrocannabinol, or THC, and high in cannabadiol, or CBD, did not authorize the Department of Health to use a lottery to grant the licenses. The complaint also accuses the agency of contradicting the Legislature's intent regarding who can get one of the highly sought-after licenses. The complaint accuses the agency of overreaching its authority with the rule, which was revised after the Legislature's Joint Administrative Procedures Committee questioned numerous other provisions. The committee plays a key role in overseeing state regulations.

The use of the lottery and allowing out-of-state operators to apply multiple times – and possibly win a statewide monopoly for the newly legalized pot – is out of line with the Legislature's intent, according to the 49-page complaint. "If adopted, these proposed rules operating together would give non-qualified participants the incentive to partner with or support many marginally qualified nursery applicants, diminishing the overall quality of the applicant pool, and increasing the likelihood of selecting a minimally qualified applicant in the random selection," the lawsuit reads.

State health officials have refused to back down from the lottery process despite repeated objections from growers and operators seeking to cash in on the pot enterprise, as well as opposition from some lawmakers who sponsored the legislation. The regulators insist that the use of the lottery selection method will get the substance to sick kids more quickly than by contracting with vendors, which would likely result in drawn-out lawsuits over the bidding process.

"A rule challenge is regrettable. The parties behind a challenge should explain why they are delaying the process of providing compassionate care to children with refractory epilepsy and patients with advanced cancer. The department remains committed to getting this product to the market as soon as possible for qualified children and families in Florida," Secretary of Health and Surgeon General John Armstrong said in a statement.

Supporters of the low-THC, high-CBD strains of cannabis believe the substance can eliminate or dramatically reduce life-threatening seizures in children with severe forms of epilepsy. Under the new law, patients with other spasm-causing diseases or cancer would also be eligible for the strains of marijuana if their doctors order it, and if their doctors say they have exhausted all other treatments. About 1.7 million Floridians have been diagnosed with conditions that could make them eligible for the treatment.

An administrative law judge will now have to decide whether to put on hold the rule, which has been revamped by health officials several times based on feedback from growers, out-of-state operators and lawmakers. The Legislature gave the newly-created Office of Compassionate Use within the Department of Health until Jan. 1 to establish the regulatory framework for the medicinal marijuana.

The agency last Tuesday published a revised rule, starting what was expected to be a 56-day countdown until interested parties could apply.Monday's challenge does not necessarily mean the regulations won't be online by the Jan. 1 deadline established by lawmakers, said Rep. Matt Gaetz, a Fort Walton Beach Republican who helped shepherd the bill to passage.

The complaint also challenges the rule's requirement that applicants document their financial ability to maintain operation for two years, saying the rule is too vague on the matter and could open the door to rogue operators. Lawyers for Costa "raised some legitimate issues," especially regarding applicants' financial health, Gaetz said in a telephone interview Monday, saying he wished the nursery would have pursued an informal process to clarify the rule. "I would have preferred to resolve these questions without a lawsuit to invalidate the rule. But I think Costa has raised some legitimate questions. My main hope is that these legal tactics do not delay access for Floridians in need," Gaetz, an attorney, said.

Lawyers for Costa allege that the rule is "vague," "arbitrary or capricious" and "imposes regulatory costs on the regulated person, county or city which could be reduced by the adoption of less costly alternatives." Licensees should be selected based on applicants' ability to provide a high-quality product, they wrote in the filing. "This is imperative because selected applicants will be responsible to dispense prescribed medication, with greater risk of public injury if the selection process is not properly carried out," attorneys Stephen Turner and David Miller wrote.

Under the law, applicants are required to have a valid registration from the Department of Agriculture and Consumer Services to cultivate more than 400,000 plants, be operated by a nurseryman as defined by state law and have operated as a registered nursery in the state for at least 30 continuous years. At least 60 nurseries meet the criteria. During floor debate about the legislation, lawmakers said the nursery requirements were intended to ensure that large growers with a long history in Florida were entrusted with the licenses. 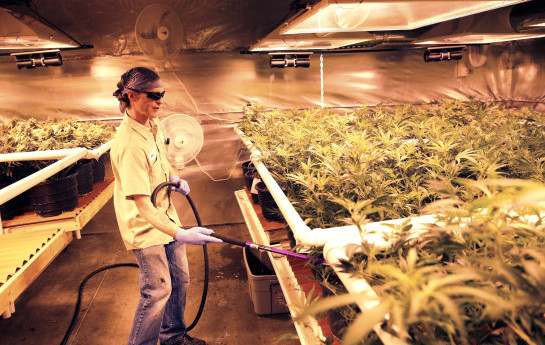 Sep 18, 2014
The General
T
T
Licenses To Grow Medical Marijuana Should Not Be Awarded By Lottery, Lawsuit Argues