By a 10-1 vote yesterday, a Missouri state House committee approved a bill that would authorize the farming, production, and sale of industrial hemp in the state, effectively nullifying the federal prohibition on the same.

Introduced by Rep. Paul Curtman, House Bill 830 (HB830) not only designates industrial hemp as an agricultural crop, it also includes all the structural framework needed to get the hemp market up and running in the state.

The bill passed through the House Economic Development and Business Attraction and Retention Committee by a 10-1 vote.

If passed into law, hemp would be reclassified from an illegal product into an agricultural one under state law. It would also expressly legalize the commerce of hemp in the state, and not just the growth for research purposes as it being done in some states. And anyone with a hemp license would be able to grow and produce hemp crops as long as they are farming on a minimum of 2.5 acres.

Notably, the bill does address some concerns of people who oppose the idea of a license for hemp farming on philosophical grounds by making the license "shall issue," which is a legal term requiring the state to issue the license to people. Without this section, a state department could deny applications for a myriad of reasons.

Passage into law will ensure that Missouri will join join five other states — Colorado, Oregon, South Carolina, Tennessee and Vermont — that have already passed similar measures.

Farmers in SE Colorado started harvesting the plant in 2013, and farmers in Vermont began harvesting in 2014, effectively nullifying federal restrictions on such agricultural activities. On Feb. 2, the Oregon hemp industry officially opened for business and one week later, the first license went to a small non-profit group who hopes to plant 25 acres this spring. The Tennessee Agricultural department recently put out a call for licensing, signaling that hemp farming will start soon there too. And a law passed in South Carolina in 2014 authorizes the same.

Experts suggest that the U.S. market for hemp is around $500 million per year. They count as many as 25,000 uses for industrial hemp, including food, cosmetics, plastics and bio-fuel. The U.S. is currently the world's #1 importer of hemp fiber for various products, with China and Canada acting as the top two exporters in the world.

During World War II, the United States military relied heavily on hemp products, which resulted in the famous campaign and government-produced film, "Hemp for Victory!".

But, since the enactment of the unconstitutional federal controlled-substances act in 1970, the Drug Enforcement Agency has prevented the production of hemp within the United States. Many hemp supporters feel that the DEA has been used as an "attack dog" of sorts to prevent competition with major industries where American-grown hemp products would create serious market competition: Cotton, Paper/Lumber, Oil, and others.

...allows State Agriculture Departments, colleges and universities to grow hemp, defined as the non-drug oilseed and fiber varieties of Cannabis, for academic or agricultural research purposes, but it applies only to states where industrial hemp farming is already legal under state law.

HB830 now moves to the House Select Committee on Commerce, where it will need to pass before the full House can consider it. 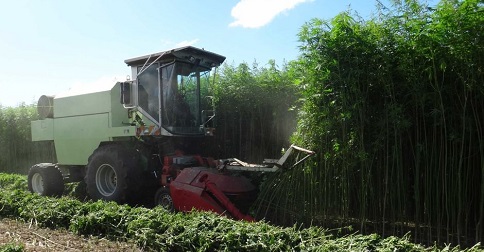