A northwest Missouri cleanup crew consisting of jail inmates and a sheriff's deputy went into a roadside ravine to clean up trash and instead discovered more than 600 pounds of packaged marijuana. The St. Joseph News-Press reports a crew from Buchanan County jail was working Monday south of St. Joseph when they discovered 678 1-pound packages of pot and three large sacks of loose marijuana. Buchanan County Drug Strike Force commander Mike Donaldson says the street value of the week, if sold in 1-ounch packages, was worth more than $1 million. Donaldson says the strike force believes the marijuana was cultivated and harvested locally. Officials destroyed the drugs by fire Tuesday afternoon. 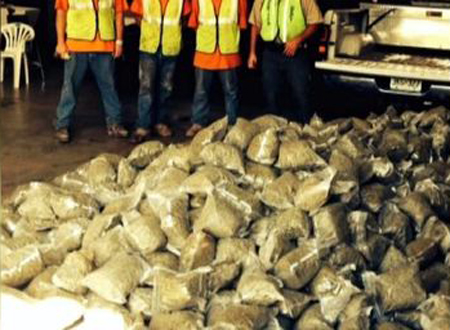