A large group of medical marijuana advocates plan to stage a protest in downtown Jackson, sending a message to the county prosecutor that they disagree with his decision to shut down medical marijuana dispensaries.

The protest is scheduled for 1 p.m. Friday, March 8 in front of the Jackson County Tower Building, 120 W. Michigan Ave and is expected to draw more than 100 patients, caregivers and advocates.

Protest organizer Joe Cain said the protest is at the county building – rather than the courthouse where the prosecutor works – to help bring the issue to the attention of all city and county officials. ackson City Hall is located on the same block of the county building on the opposite side of Michigan Avenue.

Cain is the owner of the Jackson Medical Marijuana Farmers Market.

"I am dealing with tens of thousands of patients across the state who have no access,' he said.

Jerry Jarzynka, the Jackson County prosecutor, sent cease and desist letters Feb. 22 to the 18 dispensaries in the county.

Cain said the group wants the prosecutor to reverse his decision.

"The purpose of this Act was to protect patients and caregivers from arrest. Patients and caregivers are now afraid to engage in activity that was guaranteed to them by Michigan voters," Cain said. "Now all the dispensaries in Jackson County have been shut down eliminating access for most of the patients. The law has been nullified."

At the Feb. 19 Jackson County Board of Commissioner meeting a group of medical marijuana advocates surprised commissioners with a visit.

Many spoke during public comment. County officials have said in the past that they do not have any control over how the prosecutor handles dispensaries. 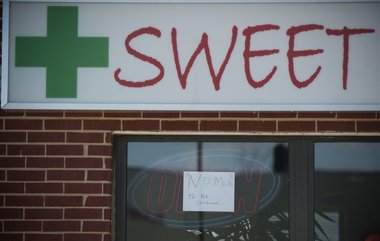 Sep 13, 2010
MedicalNeed
M
T
MMJ Patients Required To Use In Only 20% Of Their Homes After Jackson City Decision