MN: WROC's Features from The Farm: Research On Industrial Hemp

Ever since the 2014 Farm Bill authorized industrial hemp research, there has been more interest in growing hemp as an agricultural product for either seed production or fibers such as textiles, paper, and cordage. In Canada, industrial hemp was legalized in 1998, and 80,000 acres are currently grown there.

It is important to distinguish the difference between industrial hemp and cannabis used for medicinal or narcotic purposes; the two actually come from different breeds of cannabis. Industrial hemp contains less than 0.3 percent THC (the chief intoxicant in marijuana), while THC levels in marijuana are generally between 3 oercent and 15 percent. We actually have wild hemp plants growing in groves and farmsteads around the area; it is likely that some of the wild plants are descendants of past hemp crops.

At one time, hemp was an important crop in the United States; it was used to make ropes and sail cloth for ships. Prior to the revolutionary war, colonists were required to grow hemp for the British Navy. Hemp production reached its peak in the U.S. during World War II. Up until then, a vast majority of rope and fiber came from Southeast Asia. When Japan invaded Southeast Asia, the supply line to the U.S. was cut off, leaving a shortage of rope and cordage. As a response, the U.S. Government sought to increase domestic fiber production. Over 40 hemp fiber plants were built in the upper Midwest and Kentucky. In fact, in 1942, the U.S. Government made a film titled "Hemp for Victory" encouraging farmers to grow hemp. In 1943, 176,000 acres were planted, mostly in the upper Midwest.

Minnesota was home to several hemp fiber plants, one of which was north of New Richland. It was a fairly large complex of Quonset buildings and other structures, and quite possibly employed many people from the area. Other Minnesota locations included Redwood County and Litchfield.

After the war, the hemp industry declined. The supply of fiber coming from Southeast Asia returned, and the production of synthetic fibers, such as nylon, began. The last known hemp crop for fiber was planted in the mid 1950's.

Minnesota is one of the states that currently has a pilot program for industrial hemp research, which is overseen by the Minnesota Department of Agriculture (MDA). This year, in cooperation with the MDA, the University of Minnesota (U of MN) is conducting hemp variety trials at locations throughout the state. Research is led by Dr. George Weiblen, U of MN Plant and Microbial Biology Professor, and will consist of 12 varieties with four replications per site. One location is the West Central Research and Outreach Center in Morris. Most of the hemp varieties will be used for seed or oil production. Industrial hemp seeds are rich in protein, and omega 3 and omega 6 fatty acids, and may be pressed to produce hemp oil for lotions, soaps, and cooking oil.

Persons interested in growing hemp should contact the MDA. Growers must obtain a license, and have their plots checked by the MDA to make sure that THC levels are below the legal limit. For more information, visit mda.state.mn.us/industrialhemp

Industrial hemp may never have the acreage it had during the peak years, and it will take time to develop markets and infrastructure to process hemp crops in today's market. Certainly, economics will play a role in the acceptance of this crop by farmers. Time will tell how this potential new, yet old, crop fits into our cropping systems. 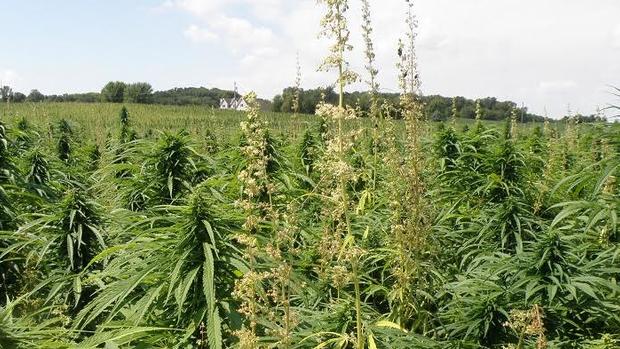