A resolution supporting legalization of medical marijuana in Missouri will be up for a vote by the Columbia City Council on Monday night.

Second Ward Councilman Mike Trapp is pushing the resolution, saying the legalization of medical marijuana is "just a common-sense measure to protect people's health and address a long-standing wrong."

Trapp believes marijuana laws have curtailed necessary research on the benefits of marijuana. He also cited a report showing that states that allow medical marijuana use have an average of 25 percent fewer opioid overdoses.

The report, prepared by Washington University neuroscientist Adrianne Wilson-Poe, showed that patients who use opioids reduce their use of the drugs by 50 percent when given access to medical marijuana.

Twenty-nine states and the District of Columbia have made medical marijuana legal, according to the National Conference of State Legislatures. In Michigan, a state that passed medical marijuana legislation in 2008, marijuana use was associated with a 64 percent lower use of opioids among patients with chronic pain, a survey published in the Journal of Pain showed.

The fact that marijuana now is illegal makes physicians apprehensive about discussing it with patients, Trapp said.

"I agreed to champion this measure to encourage the state to act and to draw some attention to the initiative petition process, and draw some awareness to the campaign to help build support and mobilize people to get out to the polls in November 2018 to change the law statewide," Trapp said.

Studies have shown that marijuana not only reduces the use of opioids such as heroin but also the use of benzodiazepines such as Xanax, another drug associated with high risk of overdose, the Wilson-Poe report showed. It cited a survey in which the overwhelming majority of 3,000 patients said they would choose marijuana over opioids to assuage their symptoms.

A comprehensive review of 10,000 studies on marijuana, published by the National Academies of Sciences, Engineering and Medicine, concluded that marijuana is a viable treatment for chronic pain. Evidence of opioids' ability to treat chronic pain, as opposed to acute pain, was less convincing.

Trapp worked from 2003 to 2005 at a medical marijuana clinic called Alternative Health Systems in California. He said he saw firsthand how the plant helped about one-third of people suffering from depression and anxiety.

Trapp has also worked as a counselor and as director of Phoenix Health Programs, a substance abuse treatment center. He said he's also found marijuana effective for people suffering from post-traumatic stress disorder.

Marijuana has also proven to be an effective antispasmodic for patients with cerebral palsy, muscular dystrophy, Tourette syndrome, paralysis, and cystic fibrosis, and it "can be a real godsend, allowing people to have a greater quality of life and to manage their symptoms," Trapp said.

Trapp also noted that marijuana is far less addictive and harmful than opioids and that the illegality of marijuana means many of its users are filling up substance abuse beds and appointments that people suffering from opioid dependency desperately need.

Trapp first floated the idea of a resolution at the council's Nov. 6 meeting to get an early gauge on how much support he would get. Mayor Brian Treece said at the time that he wanted to see specific legislation before endorsing medical marijuana. Monday night's proposed resolution urges the Missouri General Assembly to act and supports a medical marijuana initiative being circulated by New Approach Missouri.

The New Approach Missouri measure is one of several medical marijuana initiatives being circulated for possible placement on the November 2018 ballot. It includes limits on the production, distribution, sale and purchase of marijuana for medical use and would establishes licensing fees and tax rates on the sale of marijuana.

Dan Viets, attorney and chairman of New Approach Missouri, said voters are far more likely to approve medical marijuana on a ballot than the legislature is to pass a bill. There have been medical marijuana bills filed there for 40 years, he said, and some were essentially worthless.

The New Approach Missouri initiative would allow indoor marijuana cultivation to have up to 30,000 square feet of flowering plant canopy and outdoor facilities to grow up to 2,800 flowering plants. Those who apply for a cultivation license would pay a non-refundable fee of $10,000 for each license application or renewal, and then a non-refundable fee of $5,000 for each future license application or renewal. Once a license is granted, an individual or entity would be charged an annual fee of $25,000 per facility license, the initiative says.

If the measure were approved, it would generate an estimated $6 million in annual revenue for local governments and would carry an estimated operating cost of $7 million.

Eapen Thampy is a lobbyist at Heartland Priorities and represents the Better Way Missouri PAC, which seeks to legalize medical marijuana through the state legislature. He predicted Trapp's resolution would pass. He also hopes House Bill 1554, sponsored by state Rep. Jim Neely, R-Cameron, will pass. It would allow medical marijuana dispensaries to operate in Missouri in addition to legalizing the medical use of marijuana for terminally ill patients.

Thampy said there is widespread support for medical marijuana in Missouri. He opposes the New Approach Missouri proposal, though, saying it would limit the number of marijuana licenses granted and cut out competition.

Viets said the proposed licensing fees aren't outrageous when one considers the size of the operations the initiative would permit. "I don't want to see any limits on competition." 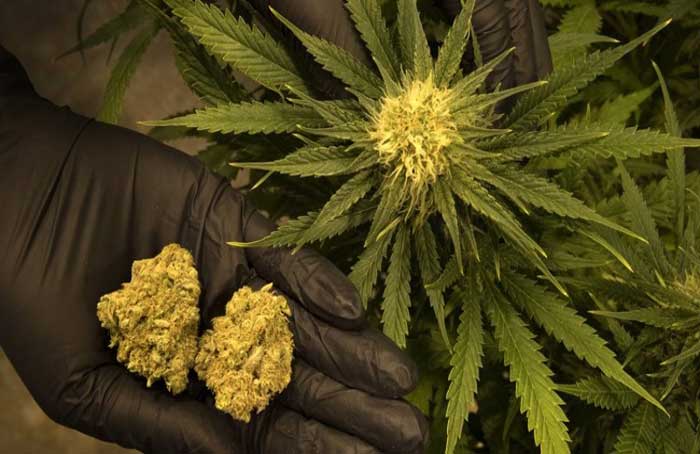 Medical Marijuana: Time For Missouri To Get In Line